DAY 11 - Declan Byrne: It's been a busy year in the Kennel - winning the Cesarewitch topped it all off

DAY 11 - Declan Byrne: It's been a busy year in the Kennel - winning the Cesarewitch topped it all off

A Cesarewitch winner, the oldest greyhound in the Irish St Leger final, a dog with a cult following in the Derby and much more – it’s been a busy year for Waterford-based trainer Declan Byrne.

The highlight of the Byrne kennel’s year was arguably April’s Cesarewitch in Mullingar, where he trained 2 of the first 3 dogs in the final – winner Master Grizzly and third Crohane Ronnie – who took home €7000 in prize money between them.

Grizzly had wins across five tracks in 2017 – Waterford, Clonmel, Thurles, Limerick and Shelbourne Park – before becoming a Classic winner.

“We bought him the previous year in Mullingar, we happened to be up the night of last year’s Cesarewitch, we bought him 12 months prior,” Declan says. “He ran well, he came down the grades, it’s just that we were going to Mullingar with Crohane Ronnie for the Cesarewitch that I decided I’d bring the other fella as well. If I did have Crohane Ronnie going I wouldn’t have brought Master Grizzly!” he confesses. “As the thing went on, he just got fitter, and in the final he just come out and led and did everything right.” 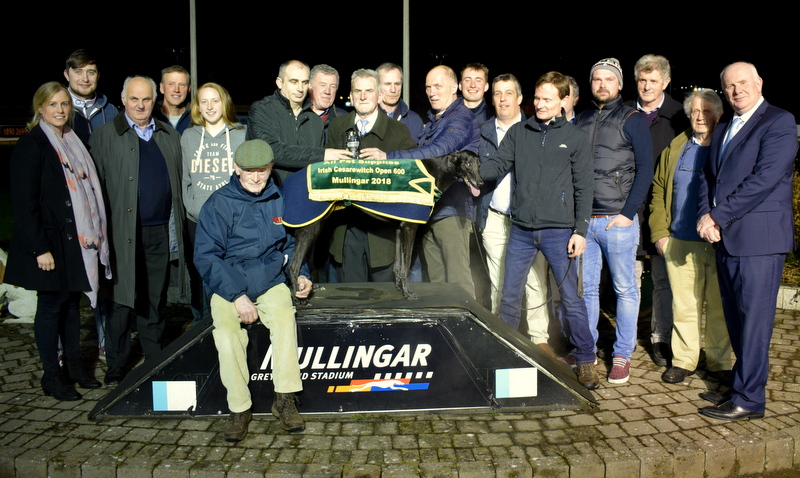 Crohane Ronnie ended up finishing three and a half lengths behind Master Grizzly the night. However, the veteran – who will turn five in April – is still going strong, with the Irish St Leger having been the second Classic final, and fifth final overall, for him this year.

“It’s amazing that he’s able to hold his form so well at his age. We were delighted to get to the Leger final with him and even the Night of Stars over 575 he ran his heart out to finish second,” Declan says of the greyhound out of Godsend and Moorstown Misha. “He’s a great dog really. He’s still here with us, he’ll race away for another while. As regards competitions, he won’t, it’s hard to keep him racing from one week to the next. We’ll continue away with him for another couple of months. He’s part of the furniture here now, he’s in great form.”

Declan says that Ronnie still loves racing, having left the traps 75 times, winning 23 races. “If you had a few more like him you’d win some races! Every time he hears the van going he thinks he’s going off in it! He loves racing, he’s unbelievable. There’s no night that he goes out that he wouldn’t give his all.”

Ronnie’s kennelmate Doggy McDogface also gained a cult following during the heats of the Boylesports Irish Greyhound Derby, not just for his name but his impressive track exploits to boot. Despite having made it to round 4 of the Derby, Declan admits he was slightly disappointed with how his year has gone: “He did some good trials before the Derby, ran a great race in the first round, won in 29.45 or something like that, we were thrilled with him. We just struggled from there on in to keep him right. He ran well enough in places but not what we were expecting. He’s had a break and he’s freshened up, he’s a hell of a dog and I think there’s a big one in him. Hopefully we can straighten him out and get a clear run with him in the spring.”

Regarding his hopes and plans for 2019, Declan says there are some up and coming prospects in his kennel. “We have some nice, young stock coming in but it’s way too early to say how far they’re going to go. There are some nice looking dogs at the moment with some good breeding behind them. Hopefully we’ll find a few nice ones over the next 12 months.”

WATCH: Master Grizzly's victory in the 2018 Cesarewitch in Mullingar can be rewatched here.