DAY 10 - Denis Quinlan: Dynamo Supreme is six years old now but he still loves racing as much as ever

DAY 10 - Denis Quinlan: Dynamo Supreme is six years old now but he still loves racing as much as ever

Denis Quinlan decided to acquire his first greyhound when he was in his first year in secondary school. His family, his father in particular, have a long tradition of owning racing greyhounds. The Quinlan family are based in Macroom, Co. Cork, with Curraheen Park being their local track.

“There was a man in Mallow called Denis McCarthy, he’d be very good friends with my father. He said ‘there’s no point in having one pup, you might as well have another, I’ve a litter, you can pick one out’. It turned out to be Dynamo’s mother, Hondos Supreme, that’s how the link came there with Dynamo.”

The Dynamo he speaks of, Dynamo Supreme, is now six years young and still racing strong, the oldest currently active racing greyhound at Curraheen Park. Dynamo’s mother, Hondos Supreme, won 6 of her 28 races between 2007 and 2010.

Dynamo, meanwhile, has been an immensely loyal servant and is still racing in Cork at six years young, having been whelped in October 2012. Over 68 races he has won 8, while finishing both 2nd and 3rd on 14 separate occasions. 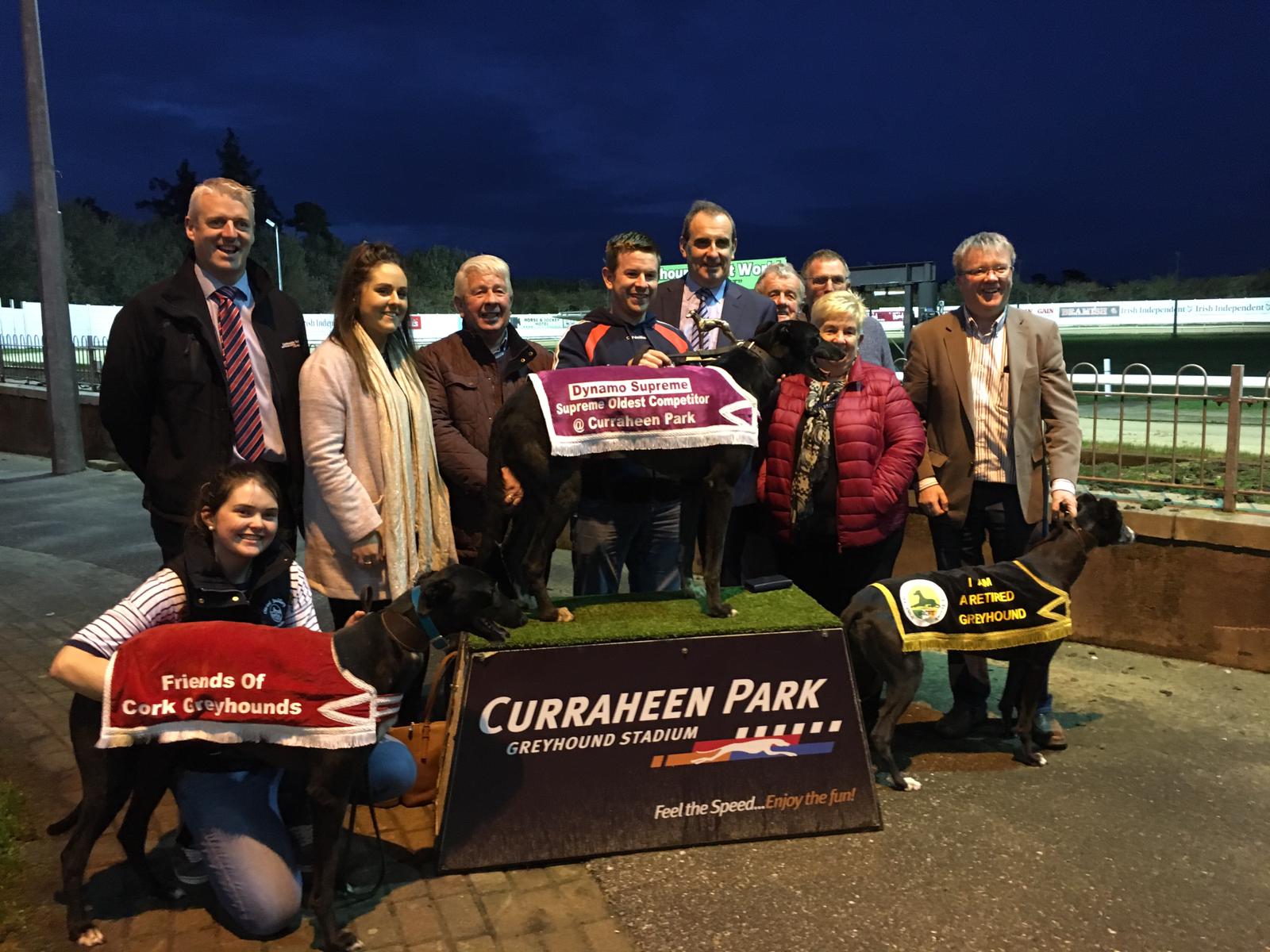 “When you bring him in now [to Curraheen Park], it’s the same as when you brought him in the first day,” Denis says. “He’s jumping around, excited, when you take him out of the car, he knows where he is. Even after races, he’s always wagging the tail and delighted with life really.”

Indeed, regulars to Curraheen will be familiar with Dynamo jumping into the air twice with excitement on the way into the gates there! “It’s like a ritual now,” smiles Denis. “Even with the new [SIS] racing and the walking around, he doesn’t even seem to like that because he’s so eager to get across to the traps as quick as he can.”

Denis mentions that Dynamo has always been a 330 dog, but it’s not a case of him just making up the numbers now. Even as recently as September, he lost out to Coppeen Timmie by just a neck in a time of 18.22.

Dynamo has been off the track since November – Denis mentions he’s giving him a break over the festive period – and the greyhound affectionately known as ‘Jack’ at home is very much happy in his second role as a family pet.

“He’s definitely a pet, they [greyhounds] nearly always turn into pets at home. We had his mother up until she was 10 years old and even the other bitch that I bought with her, she was the same.”

Dynamo has also recently become a father to three black and white puppies that were born in September.

“It’s gas, the night the pups were being born, Jack was barking next door as if he knew something was going on. Greyhounds are a lovely breed of dog. The pups are fairly lively, they’re big, healthy dogs., full of trickery and roguery. Our only fear is that we’ll nearly have a father-son or father-daughter race!” laughs Denis.

With Dynamo set to turn seven in 2019, Denis admits discussions about his future have already begun.

“We sat down and had a talk about it and said we’d rest him during the winter. We might bring him back again around the beginning of February. It’s a case of he’s mad for it, when he loves it and enjoys it so much, like anything, as he gets older you have to start managing him. A break in the winter might be no harm, nearly definitely he’ll be back in the new year. He loves the gallops and loves going to the track.”