DAY 1 - Eamon Cleary: Winning the 2018 Derby with Ballyanne Sim is my proudest achievement

DAY 1 - Eamon Cleary: Winning the 2018 Derby with Ballyanne Sim is my proudest achievement

Eamon Cleary, even after several months of reflection, still regards winning the Boylesports Irish Greyhound Derby with Ballyanne Sim his greatest ever achievement.

It’s some statement from a man who has a 1989 hurling All Star award to his name, as well as having bred and owned the renowned Cheltenham-winning mare, Annie Power.

“It’s only sinking in [now], the enormity of it. I still just can’t believe what’s happened, the way it’s happened and how quick it happened. I really enjoyed the whole thing, big time. It was a good result and the more I look back on it, it was a good result for greyhound racing,” he says with that infectious enthusiasm still obvious in his voice. 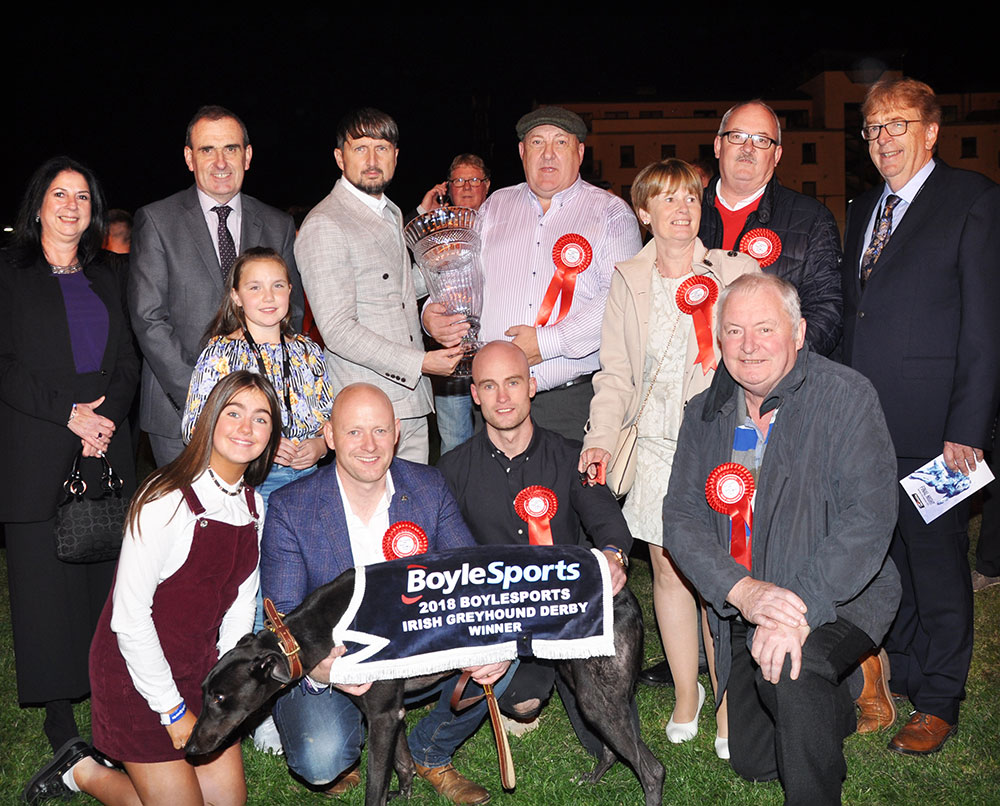 “I was down at the dogs in Enniscorthy [recently] and there’s still people coming over, I could turn up anywhere to watch dog racing, I love it, it’s the same with horses and all animals,” he continues.

Eamon told anyone who listened from Derby semi final night – where Sim was beaten by just a short head from Slippy Cian, who was outright favourite at the time – that this greyhound had a great chance. He was probably the least surprised man in Shelbourne Park on September 22nd.

“We knew that we were still improving, and we knew that we’d come on for the semi final night as well. When we saw the draw for the final, our camp knew we had a fantastic chance. Trap 1 is crucial to that dog, he just comes away so well from it. He’s fantastic early. When he made the bend and got a couple of lengths going up the back… I had a lot of friends there, a bus load of us, we were standing in the smoking area and I said to the boys, where the tractor stops and the dogs come out, ‘we’re going to be in the lead around there’ and we were in the lead there, probably a length and a half up, and we held that the whole way.”

He’s also very quick to point out the training performance of Kildare man James Robinson, with Sim being the first Derby winner his kennel has produced.

“The Robinsons did a fantastic job, it was a masterpiece really. It’s not that they’ve a big kennel, they can look after the few dogs they do have. They’re quality dogs. They’re great dog people and they know the dogs inside out. I know he was the quickest winner of the Derby ever, and he was next year’s dog to me the whole time. That’s the one thing I just can’t believe, is the way we had a plan, and the plan worked,” he says in a tone that makes one think he still can’t quite believe he owns a Derby winner!

Speaking of plans, the plan had been for Ballyanne Sim to have a crack at the 2019 English Derby, wherever that may be. That plan hasn’t changed, Eamon says.

“If we’re nothing else, we’re sports people anyway! The dog is for running, he’s a young dog. We committed to the Night of Stars anyway, that didn’t work out overly well,” he admits. He finished 5th in Shelbourne Park that night, in a time of 28.93, eight and a half lengths behind winner Cabra Hurricane.

“He’s off now, the dog is taking a break. At the end of January we’ll start him back, with a chance to go for the English Derby, wherever it’ll be. We’ll be training him for that.”

Eamon does, however, finish by saying he wants Ballyanne Sim to defend his crown next year.

“Winning the Irish Derby has been fantastic. We will be running him next year as well. He’s mad for running, he’s a great dog to train. He took everything this year in his stride, every bit of it. Next year’s plans are the English Derby and to have another go at the Irish Derby then.”