Razor house an idealistic Dream for syndicate ownership
We have featured many syndicates with differing formats and aspirations in this column thus far but grabbing attention when Candid Dreams (Razldazl George/Pukka Babe) reached the final of the Dublin Track Bookmakers Marathon at Harolds Cross recently, the House Of Razor Syndicate were out in force to support a 50/1 shot who was making a dream come true, just by reaching the final.

At first, research on the House Of Razor revealed that the syndicate began in the UK. It has members from around the world and a branch in Ireland which involves rearing and training kennels. It might sound like a vast operation with trainers in the UK also but their workings become a little easier to grasp when speaking with Lynda Bonner of Ballymena as she describes the venture as more of a greyhound community whose primary concern is not the more common goal of winning classic events but to bring like minded people together in support of racing greyhounds at whatever level they achieve while constantly ensuring that any greyhound under their ownership receives only the best of care from birth, through their re-homing process on completion of racing careers. 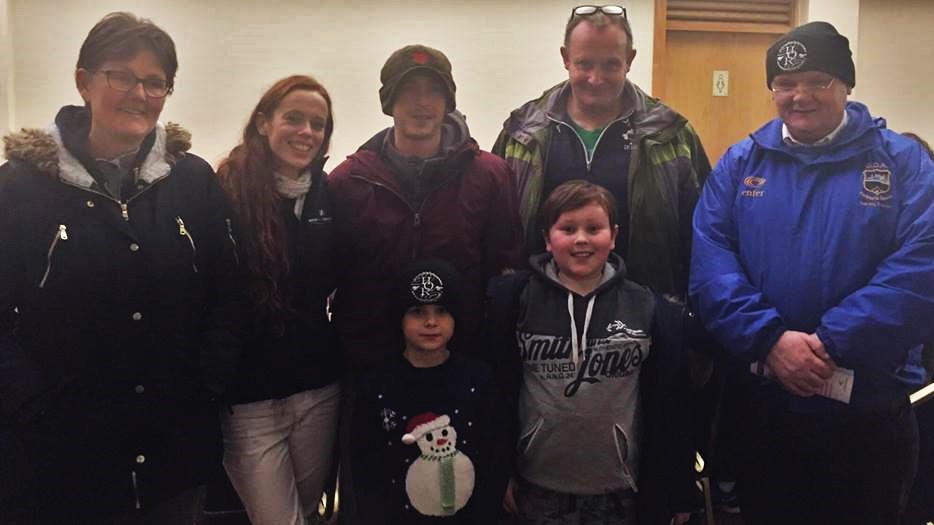 Lynda explains, “I had been involved in syndicate ownership with some of the people that are in our Irish based group now but we discovered House Of Razor UK which was started by Jeff De La Cruz and realised that we were very aligned to their ethos which was all about welfare of the greyhounds.

“The House Of Razor Uk has members from all around the world and operates as a ‘not for profit’ Racing Club where all monies go towards care, training, purchasing of new dogs and re-homing. Now if they won significant prizemoney there would obviously be a few quid to go around but when you advertise no profit you are much more likely to attract people who think the same as us where care comes first.

“Along with Padjoe Dorney, Stuart Kavanagh and Steve Millard who actually lives in the UK, we then formed House Of Razor Ireland and while we are two separate entities, we work in conjunction with our UK counterparts. Club members get to share in all the dogs belonging to the syndicate and we try to promote the family experience. Even if I have my own runners, I like the group to consider them as much theirs as mine!

“I suppose you could call us the add-on to House Of Razor Uk and both groups keep in touch through Facebook pages for each, follow all the dogs progress and arrange meetings at the races. We don’t have too many runners because our ethos is to maintain what we have to the end of their careers and beyond so we can’t keep too many at what is only a small cost to members.

“A main aspect of the venture is to give people an experience of the entire racing industry and all the time stay true to our motto which is ‘pup to couch’! We are our own kind of community within racing and all the dogs from our kennels gather support whether owned by the syndicate or not.

“Members will also get the chance to adopt our runners after they have finished racing which is the most important aspect of the syndicate and we’ve also re-homed some runners through Barry Coleman at the IGB who is always very helpful. He helped with re-homing Pee Aitch Dee for us and I now receive photos and videos from his new owners.

“That dog actually stopped on the home-straight at Longford in one of his races and didn’t finish. Before I got home I had all sorts of messages asking if he was OK and what happened to him but that’s the support we all give each other while trying to create that community feel.”

This community that Lynda and House Of Razor have strived for was clearly in evidence at the final of Ireland’s most prestigious marathon event at Harolds Cross in mid-December as Candid Dreams finished fifth in the 1010 yards final.
“That was a brilliant night. We had about fifteen of us there between family here in Ireland and members coming over from the UK. We knew he would be up against it in that stake but he had reached Open class for six bends at Kilkenny and we thought if he could reach the final at Harolds Cross, it would be a dream come through.

“We didn’t care that he got beaten and I was actually delighted that he was just contesting the lead at the first bend, never mind that there was seven more to go! To be in a final like that with so much history was great. It’s not so much about celebrating victory, it’s about celebrating being there! Sure we were all gathered around him after the race and there was people coming over asking is that the winner?! We had to tell them no, he finished fifth!

“He was trained by Stuart Kavanagh at his kennels in Kilkenny but was bred by Padjoe Dorney in Tipperary. Both these kennels are breeding for the syndicate also and Padjoe is currently rearing a litter out of Hiphip Who Razor (pet named Bluebell) who was trained by Kevin Hutton in the UK for the House Of Razor over there. So, the dogs are interchangeable really between the two entities.”

The relationship between the two branches of House Of Razor are ever developing with each serving to strengthen the other. Communication on their respective Facebook pages is constant with photo and video sharing on a daily basis but also with dogs relocating either side of the pond.

A founder member in Ireland, Stuart Kavanagh describes such saying, “We are a small kennel based in Co. Kilkenny. We met the House of Razor in 2015 when they bought a pup named Lily. Lynda Bonner had seen our add and recommended us to the House of Razor. We then went on to rear and school Lily, now named Razor de Monet, and currently being trained by Kevin Hutton.

“We hit it off straight away as we were very impressed with the club's ethics which are “from pup to couch” and responsible ownership. We are sending over a lovely girl to race in Swindon for the House of Razor, Jimelly Razor, who was bred by Padjoe Dorney and reared by ourselves. She will be trained by Ben McBride.”

With close to twenty members, Lynda describes House Of Razor Ireland as being in it’s infancy but having spoken with Padjoe Dorney who patrons of Thurles Greyhound Stadium will know as a knowledgeable and passionate greyhound racing participant, the strength of this particular syndicate’s convictions were immediately apparent. A respected figure, his passion for the venture warranted further research on my own behalf and what has been made eminently obvious is that the community aspiration of the syndicate has been achieved.

In any walk of life, turning idealism into reality can prove beyond difficult and often impossible. Unwavering with their “pup to couch” ethos however, the House Of Razor are achieving their goals and although it is a big umbrella required to cover all involved, theirs is a venture which embodies all that is good about greyhound racing.

Leaving the last word to Lynda who modestly avoided comment on her recent receipt of an OBE for her work in the treatment of venous thromboembolism she adds, “in these modern days I believe syndicates have a responsibility to engage new owners into the sport and promote ethical greyhound ownership. Racing is just one part of the overall fun of owning greyhounds. Planning a mating for future champions, the excitement of pups being born, watching them playing and growing up, kennel visits and after their racing career ends syndicate members get the opportunity to adopt wonderful ex-professional athletes. I enjoy these syndicates as all the members get to know each other very well and there's a strong family feeling connected with it”.