Whether receiving congratulations for a winning effort or a reassuring word of encouragement when not so fortunate, for connections of those greyhounds who perpetuate our sport on a weekly basis there is one certain thread that runs through any night out at their local track and even amidst the most intense competition, shared experiences bring a comradery within greyhound racing that offers the opportunity to make new friends at every turn.

Outside of the racing action itself, the greyhound tracks of Ireland are social hubs for like-minded participants and friendships invariably stretch far beyond racing interests. As such, the untimely loss of a personality who enriched the lives of so many within our chosen vocation leaves a void which in reality, can never be filled.

What we can do however is continue to remember those we lose with great fondness, something that the Mister D Syndicate were determined to do when gathering in ownership of Sanjana (Tullymurry Act/Phone Lizzie), for the April 2017 pup was the apple of her breeder’s eye before Niall Dunne of Boherlahan made an all too early exit from this life in July of last year.

Sanjana has won three times from her sixteen race outings with the latest coming at her local track in Thurles when posting a very smart career best of 31.91 (-40) for the exacting 570 yard trip on the Premier circuit at the beginning of March and despite forced to settle for a close up third on upgrade to A2 next time, remains in good form as her trainer Johnny Morrissey reports.

Johnny; “She’s grand, in fine form. She was due to run again at the weekend but she had run back-to-back 570 races so I just decided to give her a small rest. 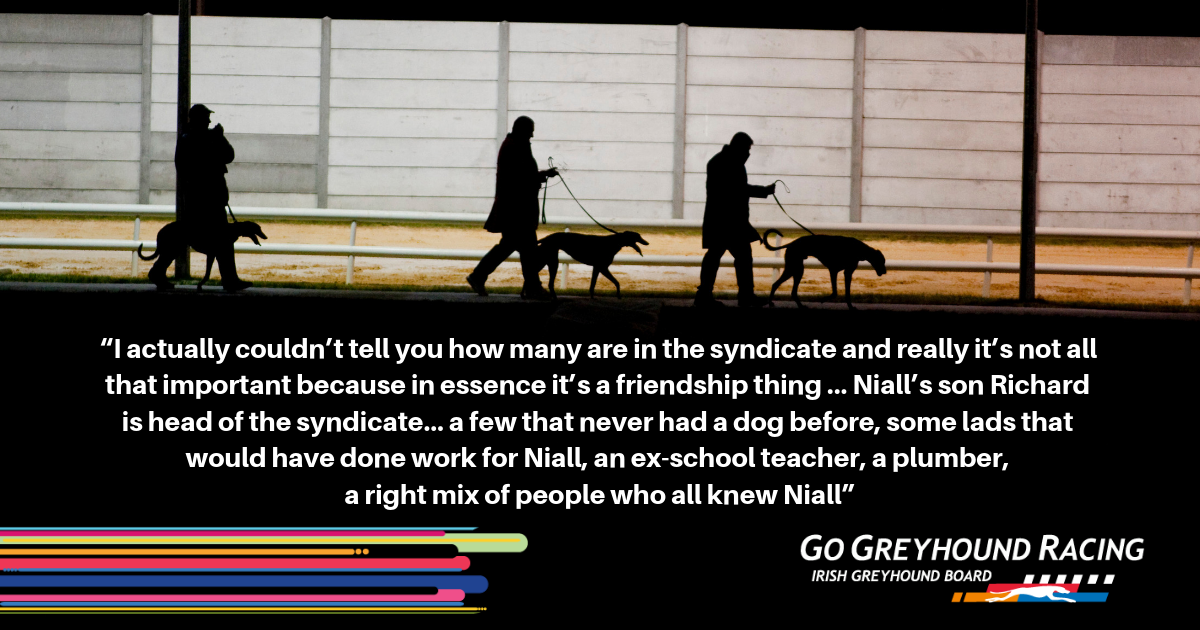 “I actually couldn’t tell you how many are in the syndicate and really it’s not all that important because in essence it’s a friendship thing and keeping Niall’s memory alive on the track. Niall’s son Richard is head of the syndicate. There’s a few that never had a dog before, some lads that would have done work for Niall, an ex-school teacher, a plumber, a right mix of people who all knew Niall and are just delighted to be involved.”

A near life-long friend to Niall Dunne, Johnny Morrissey was the only choice to guide Sanjana through her career and no doubt she holds a very special place in the Cashel kennels.

“Yeah I knew Niall for what must be forty years since he came to Cashel first. I remember he had broken his leg and he was staying with us. At the time, we were riding out horses for David O’Brien, a son of the great Vincent O’Brien. That’s where we started before Niall went on to be an electrician after.

“Sure look, it was an awful misfortune what happened. He’s a huge loss to racing, the tracks, his owners and his friends, he made friends everywhere. We feel his loss as friends but he left a wonderful family after him and it’s very special to have Richard as head of the syndicate.

“He was a very hard worker and Monday was the only night he’d take off to go to Mick Kennedy’s pub in Goolds Cross and play pool with his great friend Robert Wade or another dear greyhound friend, Bernie Fitzsimons. It’s mad remembering all the nights that Niall would have spent at the track with Robert’s dad Tommy Wade and there they are now, buried alongside each other!

“So that’s what Sanjana and the syndicate is all about, just to have a runner and keep his memory alive. The litter was the last that Niall bred and when we’d go galloping he’d always say, “mind my Oaks bitch”, he took a real shine to her. So we had to keep her!”

A daughter of Phone Lizzy, Sanjana is bred in the purple as her dam, although from a later mating, is a full sister to the runner which Niall Dunne is arguably best remembered for. Amidst a career of high achievement, Daniel Greene’s North Bound (Head Bound/No Joke Sherry) had trainer Niall contesting all the major events of the sport in a stellar racing career which saw him claim the 2013 Easter Cup, leading home Ballymac Vic in the final and that success followed victory in the Irish Derby Plate the previous season.

Phone Lizzy, who resides with Johnny, was herself a runner-up in the Cork Oaks so it’s fair to say that Sanjana certainly has pedigree on her side but while she has remained on these shores, her litter comrades made the move to the UK for their racing careers following Niall’s passing.

“His greyhound friends were very understanding and previously through his illness also. Thurles Track were very good at that time and had told Niall that whenever suited him best to bring his dogs for trials, they would accommodate him.

“He had so many loyal patrons but John Quinn of the Fast Fit prefix and Ray Patterson of Skywalker fame were great stalwarts. John’s Fast Fit Act has been flying around Cork and was probably a bit unlucky when second in the Gain Cup there lately. Ray then has Skywalker Wonder with Michael O’Donovan and he has looked a prospect in his career start at Clonmel and will probably run in the Kirby. It’s great to see them going so well as they were practically the last two that Niall trained.”

Indeed there will be many runners who have benefitted from Niall Dunne’s influence competing around the tracks of Ireland for some time to come but clearly none as special as Sanjana for she represents that core friendship that is forged through greyhound racing participation as she fondly reminds her adoring owners of a wonderful personality while keeping precious memories alive with each race contested.

What strikes most when speaking with members of the syndicate is that none seem to know exactly who is, or is not, part of Sanjana’s ownership because it genuinely is of little consequence in the greater context of this thoroughly endearing venture which member Shannon Hayes succinctly conveys.

Shannon; “There’s so many following the bitch, it’s hard to know how many are actually in the syndicate. We knew she was Niall’s favourite and I don’t know who even said it in the first place but it was decided around funeral time that we’d form a syndicate to keep her.

“My dad Chris is in the syndicate also and that’s where the Mister D comes from. They never called each other by their first names. Niall would call my dad Mr. C and he would call Niall Mr. D!

“Richard is the main man and he along with his group of friends would make the races part of their night out. There’d be about twenty people following her any time she runs, and she a graded bitch! She really is for fun and sentimental value but you’d think she was winning an Oaks if she came home in front in an A5!

“If she’s last, we’re all out to greet her after the race, the same as if she won. The winner could be gone ahead of us without a fuss and a crowd of people surrounding Sanjana, it’s great. Honestly though, we’re just happy to win a couple of races in Niall’s memory.

“He’s a huge loss. He was so well known at all the tracks. A very quiet man, but, you only had to meet him once and you had a friend made!”

That last assertion from Shannon will ring true for all who knew Niall and while an already large ownership, and even bigger following, further support for Sanjana will always be welcomed by the Mister D Syndicate from any and all of an extensive greyhound community who listed Niall Dunne amongst their friendship.

As much as any printed in a card on any given race night, Sanjana vividly illustrates that there can be much more behind a simply printed name on the programme. All involved in her wonderful career have suffered a major loss to border on heartbreak, but, Sanjana’s career is aiding those hearts on the road to repair.

It requires much resolve but inspired by the lead that Richard Dunne has taken while at the helm of this poignant ownership story, an adoring group of owners have chosen Sanjana as one source of solace while they adjust to life in greyhound racing without a presence that had so enriched their collective racing lives.

A2 around Thurles is an admirable grading for any greyhound to achieve while still a pup and who knows what level that the well-bred Sanjana may climb too?! For the Mister D Syndicate however, they will take each step of her career in stride and without expectation for each night she completes another race is a victory to her owners as she will again have sparked memories of the first man who adored her, the much revered, extensively respected and very much missed, Niall Dunne.

*As a footnote, neither Jimmy or Shannon could elaborate on the naming of Sanjana or what it represented so a quick Google search returned this entry in one urban dictionary.

Sanjana; “A friend that will be your best friend. Very intelligent and pretty, she is an awesome friend. She always listens to you when other people don’t and she is always there for you. You can call her any time you want, and she won’t mind, because she’s cool like that. If you are not friends with Sanjana, you’re totally missing out.” ……..appropriate Mister D?