For any syndicate, dreams of participating in the major events of greyhound racing are always an underlying wish when embarking on a new ownership venture but with plenty of experience behind them, the Galway based Secret Service Syndicate certainly gave themselves every chance to own a top class contender when they purchased Lemon Shane (Droopys Jet/Lemon Bolt) in November of last year.

Now primed to take his place in the quarter-finals of the 2018 Con & Annie Kirby Memorial Puppy Stake at Limerick Greyhound Stadium this coming Saturday, Lemon Shane is amongst the favourites for the richest juvenile race on the planet following his sublime first round victory in 28.35 for the 525 yard Kirby trip and excitement is naturally at a high for his seven strong group of owners.

At the helm for the Secret Service Syndicate, Jason Burke of Ballinasloe expresses his delight at that astounding opening round performance saying, “We were over the moon with him the first night. You couldn’t reasonably expect that kind of a run, and we definitely couldn’t because he hadn’t had a 525 getting ready.

“That was genuinely his first 525 since we bought him back in November. He qualified back with a 19.13 sprint in February which was only average enough really but the track was probably slow at the time because he went again the following week and flew around in 18.65, so we knew we were on the right track then. He really did only have three sprints in preparation so that first round win was a great effort and a great clock, we were delighted!”

Now trained by Gerry Holian, it was victory in a twelve runner novice stake at Limerick last November when with breeder Tom Lennon that Lemon Shane first came to the attentions of Jason as he explains, “I was actually racing at Mullingar this Saturday night and a video came up on Facebook of an unraced final at Limerick, on Leger final night.

“It was Lemon Shane winning in 28.53 and sure you could only be very impressed with it. Now I worked for Gerry in the kennels through my mid to late teens so we go back a long way and he would always say that if I saw a dog I liked, to let him know.

“We made inquiries about the dog at that stage and it wasn’t even for our syndicate in the first place but as it turned out, there was plenty of interest aside from us. I don’t know exactly but I think there was a few negotiations fell through and when we thought we had a chance to buy him, we tried to get a few lads together.

“We already had a syndicate runner with Gerry, Cragbrien Wonder, who actually won last Saturday at Limerick for us. There’s three of us in that syndicate, myself, Damien Fahy and Raymond “Cookie” Conroy, so we added four more to buy Lemon Shane.

“The Secret Service name was already in existence with Tom Corcoran and you might remember Typical Ash who ran in the Derby last year. Tom is in this syndicate now so we kept the same name, just with different personnel for Lemon Shane.

“The others I haven’t mentioned are Brian & Martin Burke and John Healy. We’re all from Galway bar Cookie, he’s a Laois man stuck in the middle of us! Myself and Cookie would be in the dogs all the time ourselves and John Healy also would be a coursing man but the rest of the lads wouldn’t be doggy men as such.

“So that’s where the syndicates are great. We all have different backgrounds with dogs but all able to do things like this together. And, for the money side of it, between us all, it wasn’t that hard on us and especially when you find a dog like Lemon Shane! He won’t go to Towcester but it looks like we’ll have him to contest all the major events in Ireland. We couldn’t ask for any more when buying a dog and he’s in the right kennel to go and challenge in those events.”

Bought from breeder Tom Lennon, Lemon Shane is part of a very talented litter which includes comrade Blue East who is also in the quarter-final draw for the Kirby following a brace of early round victories. Their dam, Lemon Bolt, has been a wonderful brood for the prolific breeding kennels of the Lennon family in Threecastles while producing many Open class runners as well as two Trial Stake winners in the coursing field with Go Usian Go and Lemon Zara from a mating to Thomas The Tank.

Suspecting that they had a live contender for the Kirby before commencement, the Secret Service have given Boylesports a bit of a headache over the past weeks as the Derby sponsors reported their young star to be the best backed in the event!

Jason; “Yeah the boys wouldn’t be shy about having a bit of a punt alright. We weren’t expecting him to be 33/1 before the off though, so that was too attractive for the lads to pass up. They’ve had a few quid! I have no luck when I back them so I didn’t invest at all but they have him each way so if he could get to the final they’d have a chance to collect.”

As Jason well knows, that path to the final in such an event as the Kirby, will be a hard fought road and Lemon Shane was made to battle for a full 525 yards of that journey in last weekend’s Round Two when drawn in the toughest heat.

Occupying Trap 2, he had the brilliant Gold Cup winner Chesporito to his inside while fastest first round winner Droopys Davy was in Trap 4. The latter claimed the heat in a stunning 29.29 with Chesporito in second ahead of a hugely game performance by Lemon Shane when recovering from fourth on the back-straight to claim a crucial third place following his early bumping in a treacherous outing.

“Winning didn’t matter on Saturday, just to qualify. You see it all the time when dogs do fast runs in a couple of rounds, they could be gone at the first sign of trouble. To qualify was the important thing and he showed on Saturday that he didn’t have to lead to qualify. It was great to see him battling so well.”

Looking ahead to the quarter-final, Lemon Shane has another tricky assignment on paper as the inside seed has been drawn in Trap 6 in the concluding heat.

“Yeah it’s not ideal being out that wide but he has Minor Mike to his inside and if he did break, you would be hoping that his early pace would lead on the outside and hopefully bring him some racing room. But, we’re there and it’s the same story again, just qualify hopefully.

“If he did get through, we’d be hoping some of the seeds would also go through because it would help a bit with the draw for the next round. We would really prefer to see him near the inside but still, we wouldn’t swap him for any of them!

“It must be the best Kirby yet and there has to be at least ten dogs still left who you could realistically see winning it. It’s so hot, all we want to do is get through. If he can reach the semi-final, we’re only one more step away from the big one.

“Excitement is high, we’re all on a high. But we’ll enjoy it, whatever it brings. We might not have a dog like him ever again. It’s great to be going to war with one as good as him!”

This syndicate story is hopefully in it’s infancy, just like the racing career of the brilliant Lemon Shane and I hope to be penning many more articles about this future star over coming seasons. The story does already have a depth of history however with Jason a former kennelhand in the Holian kennels but also having already brought friends together from within and from outside the world of greyhound racing to join him in ownership endeavours.

His Four Galway Lads Syndicate are still enjoying the exploits of the near four year old Cragbrien Wonder as the former Open racer remains hugely competitive at A1 level. Joining with Tom Corcoran to now extend the reach of the Secret Service Syndicate, Jason and his group of friends have fully embraced syndicate ownership and all the benefits that these ventures can bring.

Having been close to their company over the past weeks, I can confirm that excitement truly is high and is coupled with plenty of nervous tension for group who truly do believe that they are in with a chance in this year’s Kirby….and they’re right!

We wish all runners the very best for the remainder of the 2018 Con & Annie Kirby and in particular the syndicates for there is something very special added to the atmosphere when large groups of friends reach the latter stages in support of their superstars in the major events. 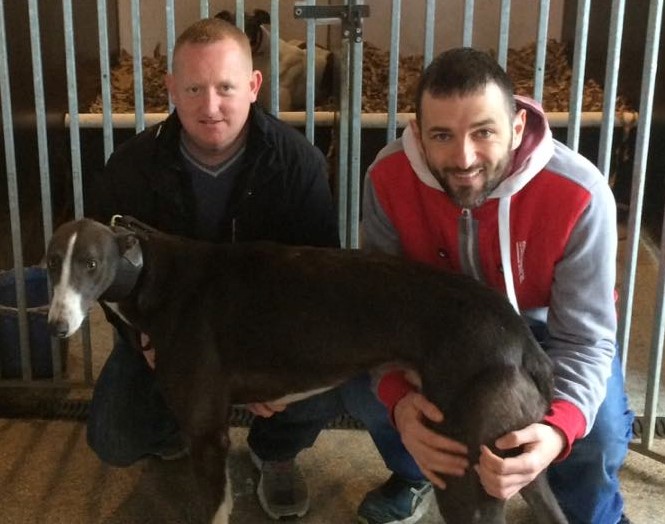