Derby fever has fully gripped the greyhound world following an exciting session of opening round heats and among the many impressive winners in the first round of the 2018 Boylesports.com Irish Derby last weekend was an established syndicate of friends who witnessed a brilliant return to racing action from their Doggy Mcdogface who now desperately seeks an extended run of form which may see him ascend to the heady heights that his puppy career always promised.

Returning from a three month absence, the Declan Byrne trained star produced a sublime performance to claim Heat 12 of the Derby on Saturday when dominating in a three and a quarter-length defeat of Holycross Lad while posting a fast 29.54.

Prior to this wonderful comeback victory, It would have been easy to forgive the Dogfathers Syndicate of Kilkenny if feeling a little frustration at the puppy campaign of their hugely talented classic contender for before contesting the opening round of the Derby, injury had forced connections to withdraw the young star from both the Con & Annie Kirby at Limerick and the Produce Stakes at Clonmel.

However, with an extensive knowledge of the sport and in ownership for some years, they have taken that disappointment in stride and speaking on behalf of the eleven strong syndicate, Brian Spratt declares, “Oh we’re hoping at this stage that we have it all sorted and we were delighted with him on Saturday. It’s great to get a win at Shelbourne Park any time, never mind in the Derby and especially the way things have worked out for him in his early career.” 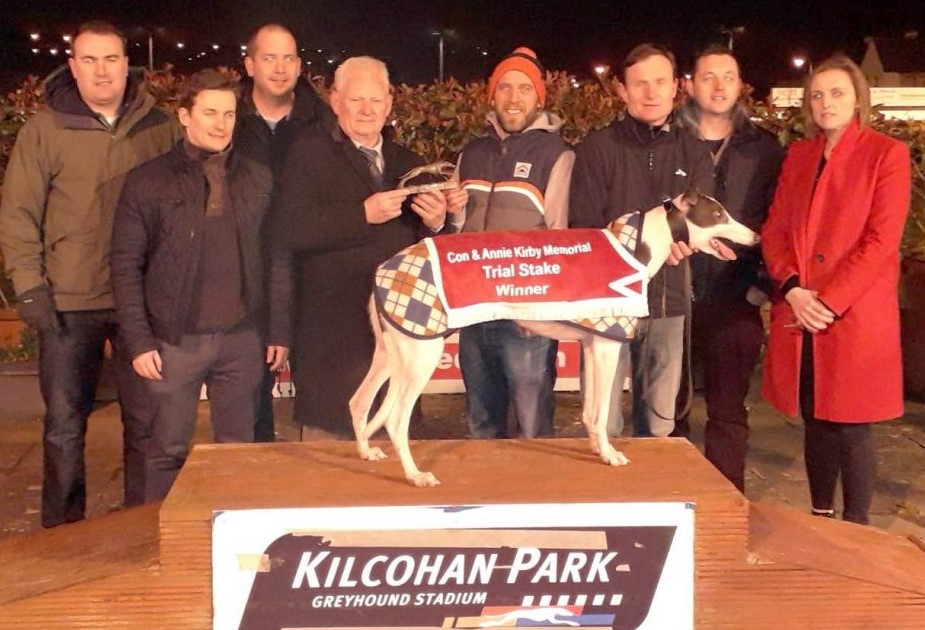 That career began at Enniscorthy last October when Doggy Mcdogface immediately marked himself as a real prospect with a 28.89 (-30) debut success in the first round of the prestigious Future Champion Unraced 525 Yard Stake and he would back that up with second round victory before a semi-final fall when tumbling over the inside running rail.

Once recovered, Doggy Mcdogface would post a first AA0 time when returning a sublime 28.23 victory at Waterford in his fourth race and this career start would see him among the favourites for the 2018 Kirby back in March.

Producing what appeared two solid qualifying efforts in the early rounds, he was subsequently withdrawn at quarter-final stage of that Limerick event and the next we would see of him was in the opening round of the Produce Stakes at Clonmel. In the thick of classic contention having scored victory in the second round there, Doggy Mcdogface was again withdrawn at quarter-final stage and from the outside looking in, it appeared as though the Dogfathers young hopeful was plagued with bad luck.

Reflecting, Brian details that early part of his career which began when the February 2016 whelp was twenty months old.

“Well I suppose it’s fair to say that Declan liked him from very early on and so things were taken slow to start and for sure, we were delighted with the way he began in Enniscorthy. He was showing super early pace in the first couple of rounds and it was all going great until the semi.

“It was a very bad looking fall and even now it’s difficult to watch back. But, he was fine after it. A little sore naturally but no major problems and in hindsight, we were very lucky.

“He came back then with a brilliant run at Waterford and the track really does seem to suit him but having produced that kind of run, the Kirby was a natural target.

“He qualified in the two rounds there but we kind of knew that he just wasn’t kicking on and it was down to a toe injury that Declan had been working very hard on. He gave the call after the second round and had decided not to persist.

“The toe was worked on again but it was the same story in the Produce Stakes, it just wasn’t holding up to the runs so after that, the decision was made to remove it. It’s never the first option but in fairness, all else had been tried.

“Clearly that operation has worked out but that was in May so it was always going to be a race for Declan just to get him to the Derby with the training time that was lost. You’re always going to feel like you’re short of work in that scenario but he has been back galloping for a while and obviously Declan had him in great form for the first round on Saturday.”

So it’s fair to say that the Dogfathers Syndicate have had an interrupted campaign with their Derby hopeful but that will not encroach on the aspirations of an ownership group who have plenty of experience, both high and low within the sport.

First established almost seven years ago, the syndicate’s initial venture was a hugely successful one when enjoying the glittering career of their White Sox Rox (Royal Impact/Lemon Rita) who was one of the best staying performers of the modern era as he claimed the Golden Jacket at Crayford in 2013 before victorious in the Barrys Tea at Cork later that same season which all followed a Night Of Stars 750 win at Shelbourne in 2012.

Taking us back to the beginning of the syndicate, Brian explains, “Well it all began with myself and Eamon Morrissey. We came up with the idea initially and in fairness we had no problem getting members, there was plenty of interest from the start.

“We had an all important first AGM in the pub of course and there was ten of us to start with. We were very lucky to begin with a dog as good as White Soks Roks. We have had two more in the interim but one sadly didn’t make the track though injury and the other we sold after a few race wins.

“So Doggy Mcdogface is actually our fourth runner and we went back to Dinny Lennon again to buy him. Dinny always looked after us well and this time he hadn’t all that many pups but still this fellow stood out and he was six months old at that stage.

“We have actually added an extra member for Doggy Mcdogface and are eleven members now. All the lads enjoy the syndicate for what it is. Of course we want to win but we go and enjoy the nights out, whatever it brings.

“A few of the lads are on holidays at the moment so missed his win on Saturday but the rest of us were there and made the most of the night with a meal and a few drinks. The way we looked at it, it could have been the one and only night that we would ever be at the Derby with a runner. So we treated it as such and had a right night.

“The syndicate are all a sporting group and all like a punt too. We had him well backed going the Kirby and sure that’s the magic of it all. Dreaming of a win and taking a few bob off the bookies at the same time would be the icing on the cake.

“We have him backed for the Derby too. One firm had him up at 100/1 before the first round, that didn’t last longer than a couple of hours!”

So despite a brilliant performance in the first round, the preparation of Doggy Mcdogface remains an interrupted one and I wanted Brian’s thoughts on just where they stand within the Derby picture at present.

“Well we thought that if he could get over a couple of rounds that he could improve, given the short preparation. He’s fresh and you know, that could stand to him. The operation to remove the toe does seem to have worked, it feels like it has freed him up but of course, he’ll have to stay breaking like he did on Saturday.”

A member of a talented litter, Doggy Mcdogface will in fact face-off against his own brother in the second round of the Derby as he has again been drawn in Trap 1, while Pudgie Budgie will occupy Trap 5 in Heat 4 on Friday.

Brian adds, “We’re happy enough with the draw but you’re always going to be meeting top class dogs in a Derby. We’ll be hoping for the litter forecast but I’ll actually take third if you offer it to me right now! Trap 1 is perfect for him but he can be suited by any draw really if he breaks like he did on Saturday because he has the early pace to get a run.”

Concluding, I quite simply and directly asked Brian if Doggy McDogface could win the Derby and I got just as direct an answer.

“Yes! We believe so and personally I don’t see why not. He has the quality. It will come down to breaking on a consistent basis but ability wise, yes, I think he can possibly win it.”

After an injury laden start to his career, this level of positivity is wonderful to hear from Brian regarding a Derby hopeful who always appeared, throughout his puppy campaign, that he was destined to be a factor in all the major events of the sport.

Here’s hoping that Doggy Mcdogface is set for a complication free Derby campaign which can see him display the full range of his extensive abilities, whatever fate has in store. His syndicate story is one of friendships strengthened through support of an adored racer as his group of owners extend a presence in racing which has already brought many joyous occasions.

Eleven in number, the Dogfathers have a sizeable entourage and will not be too difficult to spot, or hear, come the second round on Friday where all in attendance will join in wishing them the very best of sporting luck.