In any industry or indeed vocation, as greyhound racing is for so many, a healthy existence into the future must include the fostering and nurturing of the younger generation who by their very presence as active participants, are the most vital resource as front-line marketers to each new generation who, in the modern era, have so many rivals for their sporting and leisure interests.

Highlighting many forms of ownership in these columns, there is somewhat of a reassurance when finding a group of owners like the Don’t Tell My Parents Syndicate, which is headed by Tom Keating of Ennis, for a college-going membership who are enjoying the wonderful career start of their talented young pup, Estimate (Droopys Jet/Killinan Baby). 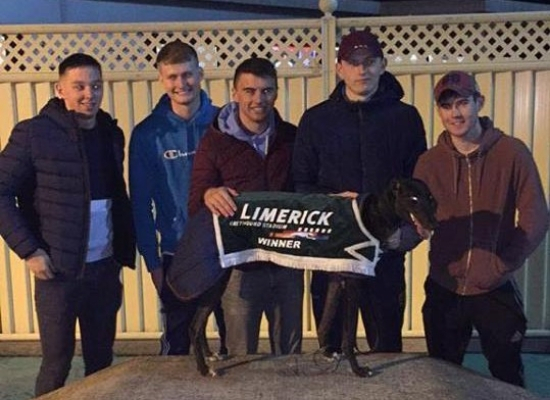 An April 2017 bitch by Droopys Jet out of the wonderfully talented racer Killinan Baby, Estimate is just seven races into her fledgling career and Tom Keating remains delighted with her racing campaign thus far, despite defeat in her latest SS0 350 yard contest at Limerick on Saturday last when chasing home Lugs Branno in fourth place as the winner registered a superb 18.55.

Tom; “She’s in great form after Saturday but sure you could only be happy with her. The winner is a superstar in fairness and we’re just delighted that she didn’t look out of place in such a hot race. She got a bit of traffic too but she’s only learning her way yet.”

That last assertion from Tom could also apply to his fellow syndicate members who are enjoying their first experience of greyhound ownership with Estimate as, initiating the syndicate, Tom has taken their passing interest in the sport to an active participation, acting on a responsibility that is incumbent on us all, to market our chosen sport at every possible turn.

Tom; “Yeah there’s six of us and we’re all friends for many years. I’m Ennis myself but four of the lads are from Clarecastle and one just out the road in Quin. None of them have owned a dog before but they wouldn’t be complete strangers. I’ve always had dogs since I was old enough to handle one and they were always mad to get into one with me, so we had flirted with the idea.

“Dave Rochfort’s dad owned dogs years ago, long before David’s time and his grand-dad Eric has been in dogs all his life. Stephen Barry then works in the Halfway Bar in Ennis which would have many of the greyhound crew as regulars so he would know plenty of people in the game.

“After that we have Stephen’s twin brother David, Niall Galvin and Mark Russell. There’s five of us going to the University Of Limerick and all are members of the greyhound racing society there also. That was a great initiative. There’s a society for everything else in there so it was about time there was one for greyhounds, and, it has made an impact.

“It has definitely created a greater awareness of the sport in general but particularly in regards to high standards of welfare and the promotion of greyhounds as pets. All aspects that would be very important to our own syndicate also.”

Best known as a regular to both Limerick and Galway tracks, those who have enjoyed Tom Keating’s company will know him to be a most amiable personality with respect for all in sport as a natural greyhound racing fan. He is however a shrewd judge also and it was his studious nature which led to the purchase of Estimate.

“Well I had tried to buy a dog from J.J Fennelly of “Burgess” fame a few months back and long story made short, I didn’t get him but I was keeping an eye on his runners and this bitch had run two races in Youghal. She was beaten in both but still, she caught the eye.

“I rang again anyway and she was for sale. Now J.J is a gentleman but he was particularly good to us. He gave us a great deal and when he heard she was going to a group of young people, he gave back a good luck penny to cover the costs of changing the names and anything else we needed to do, he was very generous to us.

“She ran her first race for us then in a stake in Galway and I was kind of chancing my arm that she’d get through the first night because she hadn’t been around there. Anyway she didn’t get the run of the race and didn’t qualify, but we weren’t disappointed with her.

“We put a wide seed on her then for her first race at Limerick and she ran very well, winning her A5 525 in 29.15. She showed very good early pace that night and we decided we’d give her a go in a sprint. Well we couldn’t have been happier, she won in 18.87 and was gone Open.

“That was a Friday and we had a bit of a night out to celebrate on the Saturday. She was now S0 and sure the only “O” I was used to seeing after dogs was KO!

“She was beaten into second over 525 yards in A3 company next time but she still ran very well and actually improved on the clock to rise to A2 grade. Her sprint last Saturday was at the very top level and it is great for us to have an Open class mark with her so soon but she’s entered for an A2 525 yard stake at Galway and we’ll let her continue learning her way in that graded company for now.

“It might be a bit of a dream but the goal for the moment is that hopefully she might be good enough to run in the Kirby next March. It would be special for myself but for the lads, with their first dog in such a prestigious stake, it would be brilliant.

“It might be a stretch too far at this stage but if she could possibly reach a level that would warrant an entry, even without any realistic aspirations to be a contender, that would be amazing.”

As with the career start of Estimate, the naming of this syndicate also caught the eye when first appearing on race cards and Tom reveals that it is precisely what it suggests!

“Ha yeah, a couple of the boys decided to keep it under wraps from their parents in the first place and that hopefully she’d be good enough to tell them about in time. But they all know now anyway and there’s none of the parents giving out when they have her backed on the nights she wins!

“But this wasn’t started from a gambling point of view or anything like that. It was genuinely for fun and sure these days, there’s young people spending it on much worse. That said, between the six of us, the costs are very manageable and she’s practically paying her way already with the few quid in prizemoney.

“The managers at the tracks too have been very good to us. Both Ollie Hester at Galway and Liam Kennedy at Limerick have been accommodating us with entries that would suit us, at times when we might have exams or assignments due but they know the value of a syndicate as well.

“The syndicates make it so affordable and it has to be the way to go in the future. It’s a great way to get people actually going to the tracks. Like for every one syndicate member, that’s another family or group of friends that you’re introducing to the sport.

“These lads now will hopefully get the bug and stay in greyhound racing but honestly, I’d imagine the way it is, we’ll always have a greyhound together, as long as we’re together. I’ve had many greyhound people close to me at home like my dad Paul, uncle Michael, Shane and Tom Flanagan along with many more, who all helped me to have greyhounds growing up. With Estimate being the first bitch that I can fully say I’ve trained myself, it’s brilliant to be sharing her career with the lads.

“But for now, we’re absolutely delighted with her. She has been super so far, we really can’t complain, a great start for the syndicate. Touch wood, all is going well and she’s staying injury free. Hopefully she’ll get a run in the stake at Galway this week and we might have another small bit of a party if she can reach her first final.”

Hopefully there are many parties in store for the Don’t Tell My Parents syndicate in support of their hugely promising Estimate but this is already an ownership venture that deserves celebration, just as the plethora of wonderful young people around the country who perpetuate our sport while endeavouring to ensure a bright future for greyhound racing.

This column may single out Tom Keating and his friends today but should also be read as a thank you to our entire body of young racing enthusiasts who are, and will continue to be, at the cold front of an ever important promotional drive amidst a changing market for greyhound racing. Whatever the status quo may be within our sport on any given place in time, there will be no more precious commodity than our youth, whether they tell their parents or not!