It’s that time of year again with the 2019 Boylesports Irish Derby now upon us as the elite racers of the sport prepare to enter battle over the next six weekends at Shelbourne Park while connections dream of classic glory.

Of course, there can be only one winner and while all participants will harbour aspirations of a deep run or even victory, many will retain more modest ambitions with just the opportunity to contest the greatest greyhound race in the world being precious within their racing presence.

There surely can be little more exciting than being involved with your first ever Derby runner and amidst an impressive purple patch at present, that is what awaits the Ducking And Diving Syndicate this coming weekend as Limerick Trial Stake winner Double Busy takes his place in the opening round. 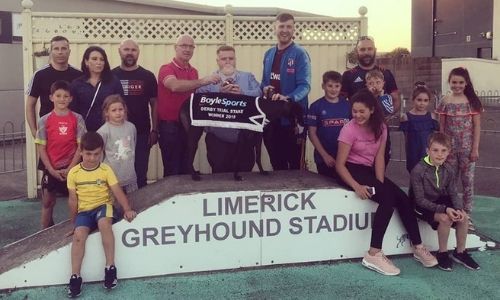 At the helm for the six-strong syndicate from Roscrea in Co. Tipperary is Paul Brussells and he reports his Derby challenger in good form ahead of a much anticipated first round.

Paul; “Oh he’s grand! He’s in hopping form, not a bother on him. Of course we’re all very excited. It will be a first runner in the Derby for any of us. We’re just waiting on the draw now but whether it’s Friday or Saturday, he’ll be well supported!” (Note: Double Busy will run in Heat 8 on Friday, a heat that also fetures last year's winner, Ballyanne Sim)

Initially coming together for the purchase of the Philip O’Keefe bred Double Busy, Paul is the most experienced of the syndicate in greyhound terms with influences from both sides of the family and surely he could not have missed his greyhound calling as mum Tricia is a daughter to four-time Irish Derby winning trainer Gay McKenna!

Like so many lively racing syndicates, the Ducking And Diving membership have a suitable base at the Full House Bar in Roscrea as Paul explains. “Yeah, Joey Murphy is proprietor at the Full House and it was actually pub talk which led to the formation of the syndicate in the first place.

“Joey would have extended family involved in greyhounds so it wasn’t all that new for him and the same with Maurice Nash but for John Pio Fitzpatrick and Christopher Neville Snr & Jnr, this would be their first real involvement. So, we have a good mix.

“We actually bought two pups out of the litter at the time. A dog called Out Out won his first race for us at Limerick and we sold him. He’s renamed Thunder Mac, running in Tralee at the moment for John Gleeson and winning his share of races.

“But that’s where the syndicate is great because with six of us, you can look for good breeding. The dam Kilara Abbie was after throwing Kilara Rex in the previous litter but having the cost spread, it’s all very affordable. I was actually scouring the internet for pups but we spotted these on a Saturday, rang straight away and collected them on Sunday!

“Now we did always think that Double Busy was the better of the two but he actually got beaten in his first race after!

“He was graded well after that though, so we went to Kilkenny straight away for an A7 stake and he went through that unbeaten. The final was actually on the BEAM meeting so it was a great night to win and a brilliant early success for the syndicate. We had a right night but I was a small bit concerned that the lads might think this craic was too simple! We had only lost one race out of five at that stage!

“He went straight on to another stake at Galway after that. He was graded A3 and it was a case of getting him as many runs in his own grade as possible. He qualified the first night but improved to his best run of 29.00 (-20) in the second round. That was the James Horan Memorial and it was fairly hot for the grade. He got beaten into second in the final anyway behind a lovely dog, Confused Reilly, but we weren’t disappointed. He ran very genuine again and that’s what he is!”

A handful of races followed that Galway experience but without success, despite some fine placed efforts in warm company, and Double Busy would then be absent from racing from October through to March of this year? However, after another short break he returned to action at Limerick in April and has been in sparkling form on his way to Derby qualification.

Paul; “Well, he had a few niggles back in October and honestly we believe he is a summer dog. He’s not too fond of the cold weather, just doesn’t seem to be himself in the winter so we gave him a break.

“He came to Limerick fresh in June and he’s back to himself again. Tommy Fletcher trains him and had him in great form. Coming back at A3 gave him a chance. It was well within his limits so thankfully he won the first night back in 29.12 and improved to 28.85 when winning again next time. He’s so lightly raced overall, that seems to be standing to him now.

“That still had him in A1 when the Derby Trial Stake came up but the way we looked at it, if he ran an A1 race, he could still meet a back-grader so we said we might as well give him his chance. The long run to the bend suits him at 550. He’s not blessed with great trapping ability but it gives him the chance to build up a head of steam.

“Sure we were delighted to win it and it was good to see him stay the trip well at his first attempt. Like I say, it meant that we had our first Derby runner, it was well celebrated after!” So, attentions would then turn to Shelbourne Park where Double Busy had never raced before and while his latest outing may appear a disappointing sixth on debut in the capital, it was more of an exploratory mission for all involved.

Paul; “Yeah, we weren’t disappointed with him at all. Everyone will tell you that any dog needs a look around Shelbourne and we were kind of throwing him in at the deep end with a race instead of a trial. It showed that he did really need that look. He was last but it wasn’t as bad as it sounds really. I thought he was a little unsure at stages and he was carried a bit wide down the back but he should improve for it.

“Look, we’re realistic about where we stand in the Derby picture and we’re determined to enjoy it whatever it brings. It’s the buzz that makes it. All we really want is to see him run well. If he could possibly qualify from the first round and get a second night out of it, that would be great. Or maybe if he did just hang about for a round or two, the €2000 incentive for the Trial Stake winners could maybe be a target. Whatever happens, it’s just great to be there.”

It’s always a pleasing feature of the Derby to see owners with a first runner in the classic but fully embracing all the benefits that syndicate ownership can provide, the Ducking And Diving Syndicate is set to continue well into the future.

The exploits of Double Busy have been compounded in recent weeks with the latest runners under the Ducking And Diving ownership making a big impression at Limerick. Also trained by Tommy Fletcher, Double Handed began his career when second in the Deadly Kennels NO3 Stake in early July while his brother Double Time entered many notebooks when posting 28.73 while also scoring novice stake success just a week later. So, this first Derby contention may just be repeated in years to come?!

Committed to the syndicate, the Double prefix has now been purchased and it doesn’t stop there. The previously mentioned sale of Out Out saw those funds reinvested and there are two more young pups in receipt of adoring attention from their Roscrea owners, who are here to stay!

Double Busy will be an outsider in the Derby but as Paul outlines, the range of incentives within the event means that there is plenty on offer for all runners, even outside the ultimate dream of Derby success. The Ducking And Diving Syndicate have laid out an ideal blueprint for any prospective owners seeking syndicate participation in greyhound racing and all amiable personalities, they would be the perfect group to seek for any guidance. They won’t be hard to find either, they’ll be the lively crew making the most noise during Heat 8 this coming Friday!