Rocket can be a Heart stopper in Kirby Semi

The 2018 Con & Annie Kirby Memorial has housed many syndicate owned challengers in the richest juvenile event on the planet and as such highlights this form of ownership as an ideal avenue to be involved with some of the most talented greyhounds of the sport in an affordable manner with the opportunity to contest the major events of the season.

Now looking ahead to the semi-finals of the Kirby this coming Saturday at Limerick Greyhound Stadium is the Davey Babes Syndicate of Clones in Co. Monaghan following a most game passage through the heats by their Rocket Heart who will occupy Trap 5 in the opening heat following his late surge on the home-straight to grab third behind Slippy Cian last week.

It was just a head verdict in a tight photo-finish which saw Rocket Heart grab his qualification spot from Loughgur Danny at the line and speaking on behalf of his syndicate, Patrick Connolly exclaimed on Sunday in the wake of that effort, “oh I’m just settling down now after the excitement of it. He was a bit fresh in himself last night I thought and it might have affected him coming away from traps.
“But he’s strong, and he was making good ground down the back-straight but then got held up at the bottom bends. I thought he was in trouble but he stayed on great again.” 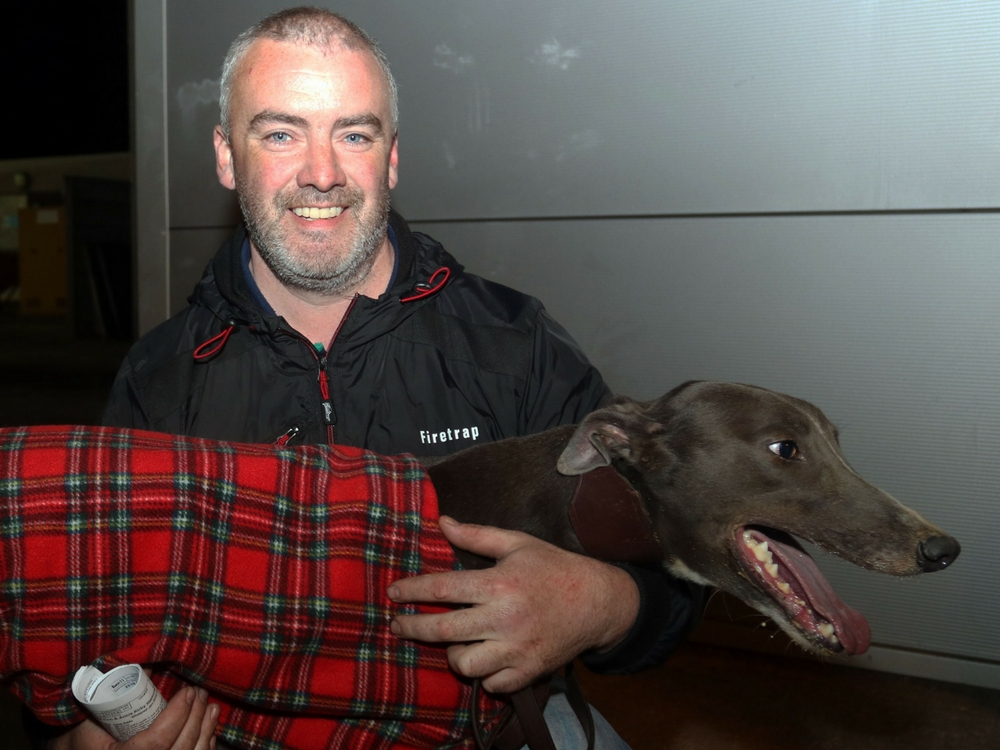 Strong staying efforts have been the feature of Rocket Heart’s passage to the semi-finals and in a truly laudable Kirby performance by his trainer Francie Murray Jnr, the famed Murray family kennels have guided three of a home-bred litter to the semi-finals as both Bonus Point and Master Jingles join Rocket Heart (Taylors Sky/Bonus) in the last twelve this week.
Such achievements from his trusted training kennels come as no surprise to Patrick however as revealed when I asked him to chart how he and his syndicate came to own their Kirby challenger.

“Well I think it was 1993 when I bought my first dog from Hughie Maguire, off the Quare prefix, and I remember we reached the final of a puppy stake with the fastest time of the year in Longford at the time. But come the final anyway, Francie Murray won it and he was just a trainer that I had huge respect for.

“I gave a good while without a dog then. Did a bit of travelling but was back working in Dublin with Fergal Nugent who’s in this syndicate, around the year 2000, and said to Fergal that we have to get a dog. We bought off Hughie Maguire again and he was trying to sell me a bitch but all I wanted was a dog. He only had the one dog but I got him anyway and he turned out to be Cabbage White.
“He was trained by Francie of course and won €40,000 in prize money. He won the Gold Collar in 2002 and held track records for the 575 at both Newbridge and Lifford. But we had some great times and good dogs with Francie through the years. We had Gingko who was a brilliant sprinter and his 400 yard track record of 20.95 in Dundalk was only lowered last year having held it since 2007!

“We have had other great experiences with Francie also but they have always been a brilliant kennels for the syndicates and another great venture was with a dog called Bungy who was owned by Clones GAA!

“So having all this behind me with the Murray’s there would always be the chance of a new syndicate forming but how I came across Rocket Heart was that I was in trialling with a friend at Limerick in February and young Francie was also there for trials.

“I tipped in along and watched this blue dog of Francie’s trial and he seemed to go very well. I didn’t know what kind of time he was doing but Francie was busy with a few dogs and handed him to me to give him a walk after the run….a nice dog he was too!

“The next day I gave him a call and I was only really ringing to say that some of the lads thought the track was on the slow side for the trials. This pleased Francie anyway so I knew the dog must have gone around well and he said to me, that fellow you were walking yesterday would make a right syndicate dog.
“Well that was enough for me because once the Murray’s say that, you are never going to be put wrong. So it only took a couple of phone calls after that. I rang a few lads, they rang a few more and in no time we had eleven lads for the syndicate and the dog was ours!

“We have a good sporting group, all lads who enjoy the craic for a few pints or a punt and approach the whole thing in the right way. Myself and Fergal Nugent would be in the dogs all the time and Billy Davey would be another who has had great experiences with the Murray’s in the past also. Some of the lads would have had shares in dogs before and Shane Maguire would have been involved in a coursing dog but for Mark Flynn, Dermot Boyle and Brian Harte, this would be their first ever dog!”

So all was in place for the Davey Babes Syndicate and their Kirby challenge but although Rocket Heart had claimed two race victories in six starts before commencement at Limerick, he was in fact graded A3 and I asked a clearly knowledgeable Patrick, was an entry in the Kirby a bit of an ambitious reach at the time?

“Well you could say it was but it was that trial really which prompted it. And I had seen the trial so it wasn’t as if I was taking second hand word that he was good enough to enter. In reality, there was never an issue when it came to entering the Kirby and once Francie had it in mind, that was enough. He has never put us wrong with a dog!”

Patrick then reinforced an assertion I myself always make when seeing graded dogs entering the Kirby which is that these are young and hugely promising greyhounds who are set to progress rapidly within the confines of the age restricted event and that in reality, a current grading means little ahead of the first round.

“Our fellow is learning his trade within the stake really and improving as he goes, like many of the Kirby runners are! And, when you look at what the Murray’s have done with this litter, three of them in the semi-finals! That’s some achievement and every one of them the same, improving with every outing.”
So, heading to the semi-final, Rocket Heart, by Patrick’s own admission, remains a big outsider in the Kirby and I was eager to ask just what the expectations were and how he saw his chances of advancing to the final.

“Well, on paper he has no chance. But, there’s always a chance and that’s one thing Francie will always tell you. The Murray’s are so positive and get preparations down to a tee so there’s always a chance.
“If he can break the way he did in the first round, turn in third or fourth, I think he can stay well enough to qualify. Like, I know there is a 28.50 run in the dog if he gets it right and that can do it.

“But we’re in a lovely position really. The overriding feeling with us is excitement where as some of the connections with the more fancied runners must be nervous wrecks at this stage. We’re under no pressure because we’re given no chance! The lads all have him backed at 66/1 too, sure you had to, and with the each way, it makes the semi-final like a final for us.”
Now living in Monard Co. Tipperary, Patrick declares that the syndicate all hail from the Clones area originally and with Billy Davey the elder stateman of the syndicate, he is attributed with the naming of the syndicate.

Patrick explains, “Billy keeps his own dogs with the Cordoola prefix but back in the 60’s he used to manage Clones Town Football Club and this one season anyway, they won all around them. The joke used to go with Billy, “I entered fourteen competitions that season and the only one I didn’t win was the Bonny Baby!”….so that’s where Daveys Babes comes from.
“We have been broken up in terms of support over the last few weeks with a wedding and a christening disrupting the travel plans to Limerick but we’ll all be together for the semi-final this week and if it’s a thing that he does qualify, there’ll be some crowd down from Clones for the final.
“Brian Harte has the Roost Bar in Clones and there’ll be a bus full of a right lively crew if he can somehow get through.

“I’m very optimistic because I know what’s in the dog, more so than it looks like to everyone else. You just never know in a greyhound race. He’s drawn beside his comrade Master Jingles for Kathleen & Francie but if we were third and they happened to be fourth……I’d take it!”
There can be no doubt that a Kirby final appearance for Rocket Heart would be yet another significant punctuation mark amidst a wonderful association between Patrick and the Murray kennels. Their venture is another fantastic advertisement for syndicate ownership which has been perpetuated by Patrick and his greyhound friends to now include an extended group with wide ranging experiences of the sport, from extensive to a completely new racing endeavour.

Accommodated by one of the most revered training kennels in the sport, we wish them the sincerest of sporting luck ahead of the semi-final if only to see that Clones bus pulling in for the final but more so for their brave Rocket Heart as yet another of our wonderful canine athletes who continue to fulfil dreams throughout the course of every season.