Oldest winner in town, Cosabawn eyes up a century

Oldest winner in town, Cosabawn eyes up a century

As important to promote as any of the wide ranging syndicate formats that have been featured in this column are the family ownership groups within the sport; for while members can have very diverse working lives, the time commitment required to pursue greyhound racing endeavours can be shared amongst a dedicated and knowledgeable ownership.

One such example is the Shanakyle Syndicate of Joe Collins and family for whom one dog in particular has commanded the lion’s share of that time commitment in recent years, given that he is still racing on the approach to his seventh birthday! 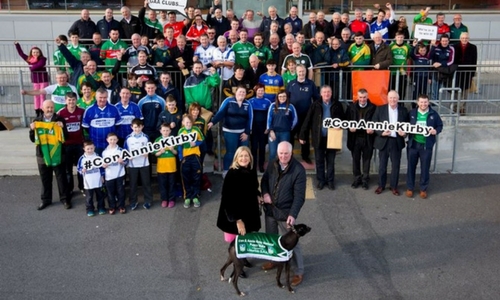 Some weeks ago, Limerick Greyhound Stadium Racing Manager Liam Kennedy, in the wake of victory, put the question to the greyhound public asking if Varra Cosabawn was the oldest greyhound currently competing in Ireland. The response, which was reported by Michael Fortune on the Talking Dogs news forum, unveiled two older runners with Roger O’Rahilly’s Knockeen Crash still racing at Tralee as an April 2011 whelp and Lyreen Legend gamely still plying his trade around Clonmel having turned seven years of age only last month.

How wonderful it is to see these old stalwarts of the sport still relishing racing and maintaining themselves in good health while remaining competitive in their advancing years. And, we encourage all race goers to take the opportunity to support these flag-bearers should they appear at your local track.

We will in this issue however focus on Varra Cosabawn and while Liam Kennedy may have failed to establish him as the oldest still racing, the Collins family favourite does have one impressive accolade which he can claim as he approaches his 100th race. Having scored his latest victory in S6 grade over 350 yards at Limerick in December, Varra Cosabawn became the oldest winner currently racing in Ireland at six years, six months and two weeks old; which pipped Knockeen Crash by just three weeks!

Catching Joe Collins on a break from working in the kennels at Parteen Co. Limerick, there was an overriding tone of sincere fondness as he spoke about his friend, Varra Cosabawn.

Joe; “Oh he’s alive and well. He’d nearly talk to you and tell you himself if you asked him! He’s as healthy as he has ever been, full of life. Dogs like him don’t come along too often.”

Varra Cosabawn contested his 95th race in late January when his habitual slow start saw him held in fifth place but a usual fast finisher over the sprint distance, he recorded four victories in 2017 which has taken his total to fourteen in all and Joe declares him fit to go in search of more.

“Yeah, I have told Liam to keep him going so I expect that he could be racing this weekend. He just loves racing and he knows well when it’s race day, there’s an extra pep in his step.

“But these days there’s no need to trial him or do anything with him. I just try to keep him fresh. He doesn’t even go on the walker anymore. He has a 50 yard run he can go out to when I open the kennel door and he tears up and down along that a few times, it keeps him happy.

“The 100th race is the target for now and there are no signs that he won’t get to it. That would be a nice milestone for him but it’s only a number really and he’ll tell me when has had enough. I can’t see that coming any time soon though. The way he is now, I could see him going for another twelve months!”

The Shanakyle Syndicate which consists of Joe’s wife Kitty, son Peter and daughter Claire have owned Varra Cossabawn for over four years since purchased from good friend Donal Casey and Joe has always been a fan of the Casey bloodlines.

“I bought him from Donal when was gone two years old but he hadn’t won a race at that time. I just think Donal wasn’t all that sure he was going to win too much and he was happy to let me have him but then again, they had some very good dogs at the time.

“The Varra line has had some great dogs and always racing at Limerick so of course we’d have huge respect for their breeding. And the old boy hasn’t let it down either! He’s as genuine a racer as you could ever wish for. We have the old saying, “he’d go through a stone wall for you”, well that sums him up.

“Sure he’d have a lot more races won only for an injury he got which kept him off the track for a good while when he was about three years old. He was out the fields and he was going so fast he never even saw the barbed wire until he ran into it. That took a while to get over but to his credit, it’s the only real injury concern that he has ever had. He has stayed very sound otherwise, as he is today.”

Reaching a career high of A2, Varra Cosabawn admirably posted his best 525 yard time of 29.14 when well past his fourth birthday. Always a strong stayer over 4-bend distances, his recent career has been contested over 350 yards which although not entirely playing to his abilities, Joe will maintain for his own well-being.

“Yeah he wouldn’t be a natural sprinter but at his age, he gets a full circuit of the track for the 350 yard races at Limerick and that’s enough to be asking him to do these days. Like I said, we just want to keep him fresh. He loves his racing!”

Naturally, the day will come when Joe will have to call a halt to this wonderful racing campaign but the Collins family friend will be going nowhere when that day does eventually arrive.

“Oh he’ll have a place on the couch in Shanakyle until his last days, sure he’s part of the family now. And you never know, I have it my head to give him a bitch. I have well bred girl here and I’m contemplating the possibility if she breaks soon!”

To those who look towards the highest achievers in the sport when buying pups or breeding, that may seem an ambitious venture on Joe’s part but you will find no detractors of the Varra breeding lines around Limerick and those who harbour Joe’s outlook on greyhound racing will see it as a very interesting and even noble venture.

Joe Collins would love to have a Derby winner as much as any in the sport but he sees racing heroes, just like Varra Cosabawn, throughout all grades of the sport. Many will know Joe from the years he spent with his own schooling track for fifteen years from the early 90’s in Parteen and there are very few avenues of the sport that he has left to explore.

It can’t be coincidence that Varra Cosabawn remains in such rude health as Joe Collins’s endearing and thoroughly pleasant nature has surely contributed to his continued happy existence and hunger for racing.

In our closing exchange, Joe’s words best describe both himself and this wonderful racing venture between adoring family owners with their best friend.

“This is a great pastime and we’re in it for a bit of fun. Whatever grade they happen to race at, we don’t mind. We have a bunch of friends who all gather around the same table at the track every week and we’d be arguing and fighting about who’ll win this race or whatever else we can debate; we have a great auld banter going every night.

“Dogs like this old boy don’t come along very often, they’re rare and precious. It’s great to have a fellow like him. He’s jumping in the mornings waiting to go and as long as he’s still like that, I’ll still keep him doing what he loves most!”