K’s are here to stay with busy Brazilian

K’s are here to stay with busy Brazilian

K’s are here to stay with busy Brazilian
The greyhound racing fraternity is gratefully renowned for creating a welcoming environment for those who are embarking on their first ownership venture. There is no greater wish for these new participants than the hope that their first experiences will prove successful and possibly lead to an extended stay in our sport for these new owners.

As such, greyhound racing must thank thirteen time Kilkenny winner Brazilian Ditch (Ace Hi Rumble/Flomur Perla), for her wonderful career thus far has brought all the “craic” that the Five K’s Syndicate of Paulstown Co.Kilkenny had hoped to enjoy from their first racer and as a result, the future brood will keep her delighted owners at trackside, long into the future. 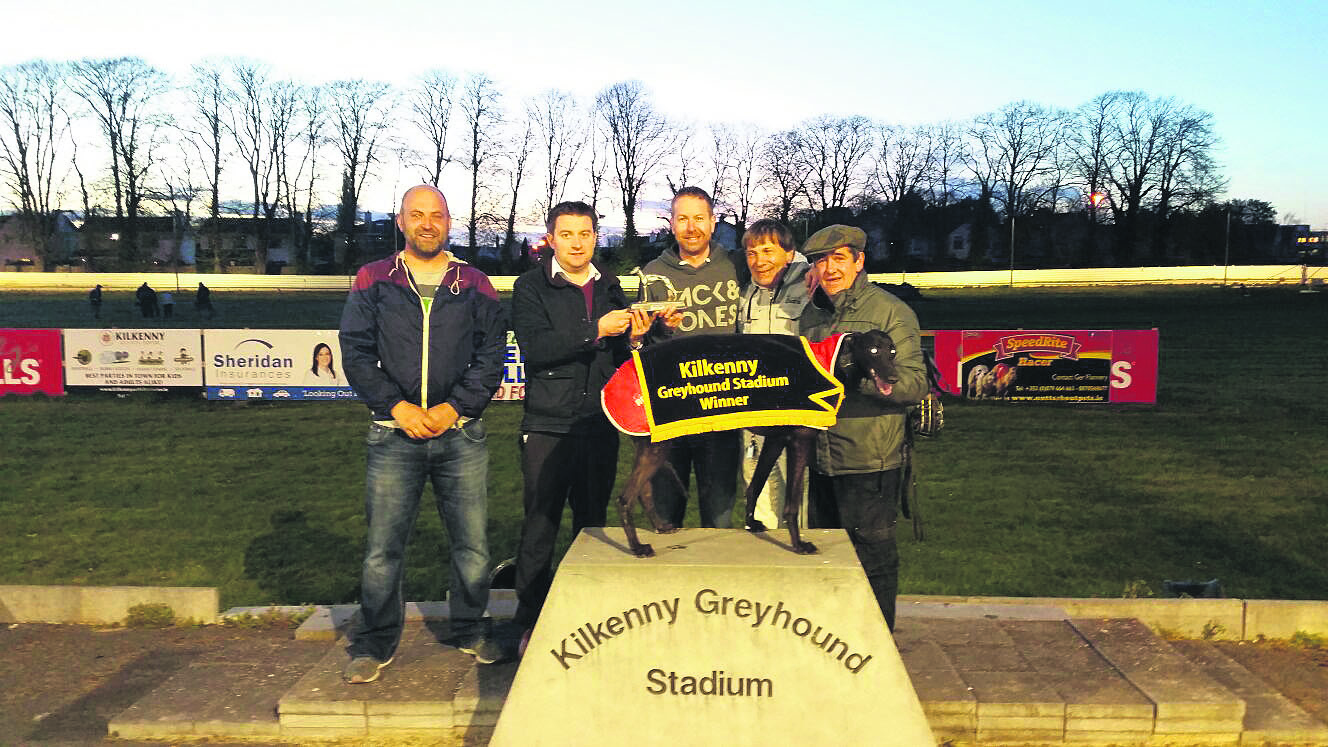 An initial conversation with Trevor Walsh revealed that the syndicate does in fact consist of just four members despite the name. “Well the Five K’s is simply that we’re all from Kilkenny and there was five to start with but one of the lads decided to drop out at the very start. It wasn’t out of lack of interest or anything but just a new child around the same time and sure he didn’t really need the extra distraction.
“There’s myself, cousins James & Brendan Hickey along with Brian Power who was responsible for the whole thing in the first place. We all live in the Paulstown area and know each other for years but Brian was the only one of us that had any involvement in greyhounds before.”
Directed by Trevor, the conversation then turned to Brian Power who explains, “I know the breeder Pat Murphy fairly well from having a few dogs before and he’s only beside us here in the town as well. He just said it to me in the pub one night about the litter and if I would be interested. Sure I put it to the boys then and that was that.
“Ah sure it hasn’t worked out too bad at all. We’re mad about her! She gives it her all every night she goes out and you couldn’t ask for anymore than that!”
Brazilian Ditch began her career with a smart 300 yard victory at Kilkenny, when credited with 16.58 which saw her in S3 company thereafter. A second victory over the sprint distance took some time to materialise but her career began to take a more defined and progressive path following her first 525 yard win in A5 grade.
Having passed two years of age, she scored the first of four sweepstakes victories when rising to A1 in a brilliant campaign to land the Golden Oldies A4 525 yard stake at her home track. Clearly maturing rapidly at this point, she coped with the upgrade to score victory in A1 before becoming a formidable A2 racer on the Kilkenny circuit for the bulk of her career.
That career is now twenty months on the track and in that time Brazilian Ditch has been very busy. Gratefully staying injury free, she has raced 46 times, winning thirteen and being place in a trio position on 31 occasions.
Her consistency and steady progress is not lost on her owners who fully appreciate her endeavours. Exclaims Brian, “Ah sure you’d nearly bring her home to bed with you, we’re gone so fond of her at this stage. She’s a legend! You’d find it hard to get one as good again, especially for a syndicate with it’s first runner.
“We’ve had a right few sessions out of her sure. She’s been in four finals and won them all! She has a good strike rate overall anyway but you can’t argue with a hundred percent in finals, she knows when to win! We don’t be backing her or anything and we’re not in it for the money either but still it’s nice to get the prizes. She has paid her own way but between four of us it’s not expensive anyway and honestly, I can’t remember the last time we had to pay a bill.
“We’re lucky though with our trainer Brian Ellard. He was the only trainer that we knew very well from the local Boxing Club going back through the years but even at that, he was well recommended at the time and he has been great for us. He wouldn’t be hard on training fees and it’s fair to say she’s in the right place.
“She’s off at the moment with a small injury, the first one of her career really. She’s graded plenty high enough though for a comeback but Brian says it’s worth giving it a go and that’s good enough for us. She might have to come back and win another final though because we all got a trophy each from the four finals she won but James Hickey got a small bit drunk the night she won his one and he broke the tail off it. If she could manage to win a new one for him, that’d do!
“She won’t be 3 years old until April so she does have plenty of time but we intend breeding her and she owes us nothing so the pressure is off in that regard. She’ll be with Brian for breeding whatever way it goes and actually, the syndicate has already got her racing replacement lined up!
“We have a pup bought out of a litter that Brian bred. He’s about six months old so we’re all set up to keep the thing together. We’ve been lucky with the bitch and really we are only in this for the craic but when you get one as genuine as herself, it’s easy to get dragged in looking for more of the same.”
The Five K’s Syndicate have indeed been fortunate to find such success with their first racer but so too is greyhound racing lucky to have attracted new participants who now pledge to extend their presence in the sport. We wish the Paulstown four all the very best with Brazilian Ditch’s impending return to action and may find ourselves in conversation once again when her pups begin to create their own headlines which is a distinct possibility if they possess the same consistency and battling qualities of their entertaining dam.