Nothing like a good Kipper for the Hangover
Cold weather conditions over the past weeks have affected the racing schedule at various venues and has left the Hangover Seven Syndicate with a fortnight delay to see their Kippers Rocket (Ace Hi Rumble/Tromora Dixie) contest the final of the Niall Comerford Memorial A4 525 Yard Stake at Kilkenny. However, with milder conditions predicted this week they will be back in action on Friday night, determined to enjoy more of the racing “craic” that their syndicate name would suggest.

Speaking on behalf of seven members on Saturday last, Ogie O’Meara is a sole Toomevara native amongst six Thurles friends and exclaims, “Oh sure called off again last night, that’s two weeks now. The waiting is torture but sure there’s nothing can be done. We’ll have a bit of craic this week hopefully. The only real problem with the delay for us was that we had a plan to give him a run in Dublin for Christmas because John Paul Dwan has just moved up there lately and we were going to make a right night out up there for the Christmas, but we’ll hardly make that happen now.”

Five members of the Hangover Seven Syndicate are enjoying their first venture into greyhound racing with Kippers Rocket being their second runner as the syndicate had actually formed in early 2015 for their hugely talented and successful debut runner Kippers Jet (Scolari Me Daddy/Sizzling Gina). The initial decision by the former school friends to begin their ownership adventure was sparked by visits to Thurles track and was further influenced by a syndicate who have previously been profiled on these pages.

Ogie explains of the formation of the syndicate and of the many lively nights at Thurles which led the seven friends now becoming seasoned greyhound racing regulars. 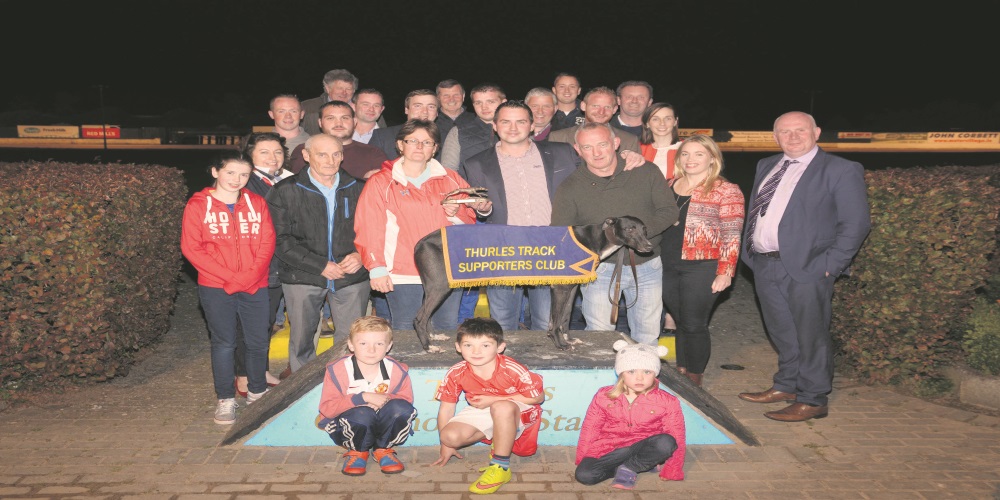 “Well we are all friends from school days but myself and Davy Collins are the only two who were involved in dogs before. I’m living in Borrisoleigh now myself but the six boys are actually renting two houses side by side, straight across the road from Thurles track. And I told you that John Paul has moved to Dublin just lately, well he’s actually living in one of the apartments, looking out at the racing over the second bend in Shelbourne Park!

“Anyway, Davy’s brother Michael was training Davy Of Ozz for the Cant Afford A Horse Syndicate so of course we knew all about the craic they were having. We were following them during the Tipperary Cup and I’m not joking, they were some sessions! That kind of sparked it for us and it was on another session one night that the decision was taken to buy a dog.

“Now some of the boys were throwing out names of big trainers to approach but I said no. Myself and my family have always had great dealings with Brendan Everard of Templetuohy and I told them that he was our man. So we approached Brendan and he was going to source the dog for us and train him too of course.

“He got in touch with John Kennedy for us and at the time, John had a good few nearly ready to race. So then, which I thought was brilliant, John invited us down to Clonmel for a trial session where he was trialing ten unraced dogs and told us that we could have the pick of them after watching them go around.

“There was five of the syndicate in attendance and this is where we picked our first dog, Kippers Jet. He was actually only second in his trial but he ran against an older dog and showed good early pace. John was very fair to us on price too when you think of the breeding he has and considering the dog was ready to race!

“He won his first race then at Kilkenny and we all backed him as well at 3/1 for a nice few quid, sure it was some start for the boys. He went on to an A5 stake at Thurles and went through that unbeaten. That final was some night. We all had the families and friends with us, sure the bar nearly ran out of drink! At that stage he had won his first four races. This was all going too well, I was thinking this dog will never get beat and knowing too well that it’s not often like that!

“He had a few defeats then to bring everyone down to earth a bit but he went sprinting after a while and was very good in fairness. One of the best night’s we had with him was a sprint in Thurles when he beat the Cant Afford A Horse boys with Davy Of Ozz. Sure you can imagine the slagging and jeering that went on that night, twas great craic. Sure it’s all only a session with them too.

“We took him up to Shelbourne for his last few races and he kept improving after turning two years old and fair play to Brendan, he had him flying up there. In his last race for us, he won a SS0 350 yard race in 18.66 which was top class. That night was unreal because we booked the package online and brought the women, then the dog flew around sure it couldn’t have worked out any better.

“We got loads of offers to sell him after that run and we decided it was the right time to say yes. We did ok too considering the dog was 29 months and he went over to the UK to continue his career. Although there was a little bit of resistance from Philly Ryan who wanted to keep him and have him as a pet when he was finished racing!
“So the syndicate was in good profit after that but we always keep on top of the kitty anyway. After building a fund to start in the first place we have always kept it topped-up with a tenner a week from everyone just in case anything crops up and that’s all this is costing us but having said that, the prizemoney is still in the kitty, never touched!

“It’s easy say it but it’s not about the money. We were all great friends going to school and you could easily lose touch but this keeps us together. I have a new child now and it’s the only chance I get to go out really. It’s a much better excuse than saying I’m just going down to the pub! It wouldn’t be too often that I’d get to see the lads if it wasn’t for the syndicate.

“So anyway, he paid for the next dog and we were onto Brendan straight away, no waiting around. Now we would love to have gone back to John Kennedy again but he didn’t have anything the right age so Brendan found Kippers Rocket for us. He was called Tromora Boy but we decided to keep the Kippers name going, it was simple, way more simple than naming the first dog.

“Kippers Jet was always called that but we were going to come up with a name of our own. We have a Whatsapp group for the syndicate and the lads were throwing out names there but Killian McNally was actually googling “good greyhound names” and throwing these at us as if we could use those famous names. So we just said we’d leave it as it was!”

Now settled on the Kippers prefix, the Hang Over Seven Syndicate will be easy to keep track of and any night in their presence is assured entertainment. Witnessing new owners enjoying success and lively nights out in support of their pride and joy is one of the most satisfying aspects of our sport. So in that regard, the efforts of Ogie O’Meara and Davy Collins in facilitating this venture for five syndicate members who had never previously owned a greyhound is most laudable.

They are ambassadors for a sport that they grew up within and like many who have been highlighted in this column previously, set an example to all greyhound folk. Their friendly association with the Cant Afford A Horse Syndicate has set a wonderful tone on many exciting nights at their home venue in Thurles, even in rivalry and their commitment shown when immediately seeking a new runner in the form of Kippers

Rocket ensures their greyhound racing participation, long into the future.
Now preparing for another final on Friday at Kilkenny, it is wonderful to hear from Ogie O’Meara whose family have tasted coursing success at the very highest level through their famous Chubbys prefix including Coursing Oaks victory in 2007. The enjoyment gleaned from the track exploits of his syndicate is palpable throughout the conversation although he is fearful that they may be forced to settle for second place this week.

“Ah you have to say that Brendan has done well for us again in sourcing Kippers Rocket. He won his first race at Kilkenny, same as the last lad but they were a bit wised up to us this time, they would only give us 4/5! I think myself he’ll probably be second in the final. He was second and third to the same dog, Condor Merlin, in the heats and we’d need a fast break to lead him at the bend to have any chance of beating him.

“But even so, we have had a great start again. Overall the syndicate has had a total of twenty-four races and only been outside the first 3 in four of those so you can’t complain about that. We have a lot of lads trying to make their way into the syndicate now too but we’re going to stay as we are and sure whatever happens on Friday, we’ll have another good night out!”