One of the most prestigious graded stakes on the entire calender, the A1 525 Yard Langton Hotel & Track Supporters Club Derby at Kilkenny Greyhound Stadium, more often than not, requires any aspiring winner to possess talents beyond that A1 level and in 2016 the event returned a most impressive victory for Me Phat Daddy (Scolari Me Daddy/Lemon Soul) who extends the brilliant ownership exploits of the Glamour Paws Syndicate in Kilkenny.

Joining the AA0 ranks having claimed the €4,700 first prize, he delivered on his early career promise by winning three of his four heats in the competition. Recording a career best 28.79(-30) in Round 1, he completed the event with a most accomplished display from his suitable Trap 1 draw when keeping pace with 2015 Tipperary Cup winner Black Tom to the opening bend before asserting his dominance on the back-straight for a strong running five and a half length verdict.
A third racing representative for his winning owners who began their syndicate with none other than Scolari Me Daddy in 2009, Me Phat Daddy will now target the Waterford Masters with syndicate member Aileen Lennon, daughter of trainer and prolific breeder Dinny Lennon in Threecastles, hopeful that he can continue to improve.

“He’s running great, we’re delighted with him. He’s just starting to come into his own now actually. He gave a long time where he wasn’t really right in himself, just not eating well even though there didn’t appear to be much wrong. But he came through that, was back eating and Dad said to me back in June or July, he’s right now! From that day to this, he has just kept improving, long may it last!
“He’s up in Open class now so you have no choice, you have to take them on but we’ll go to the Masters in Waterford before we think about Shelbourne. It’s a bit closer for us all going racing and it’s a very good competition to see how he can match up with the top dogs. He might lack a bit of early pace at that level but he wasn’t too far off Black Tom, who is a very fast runner, going to the bend in the stake so that’s encouraging and he’s developing to be very strong at 525 yards so you’d think that he can go to 550 in the future. His times are good at Kilkenny though and they should hold up anywhere really, so here's hoping!” 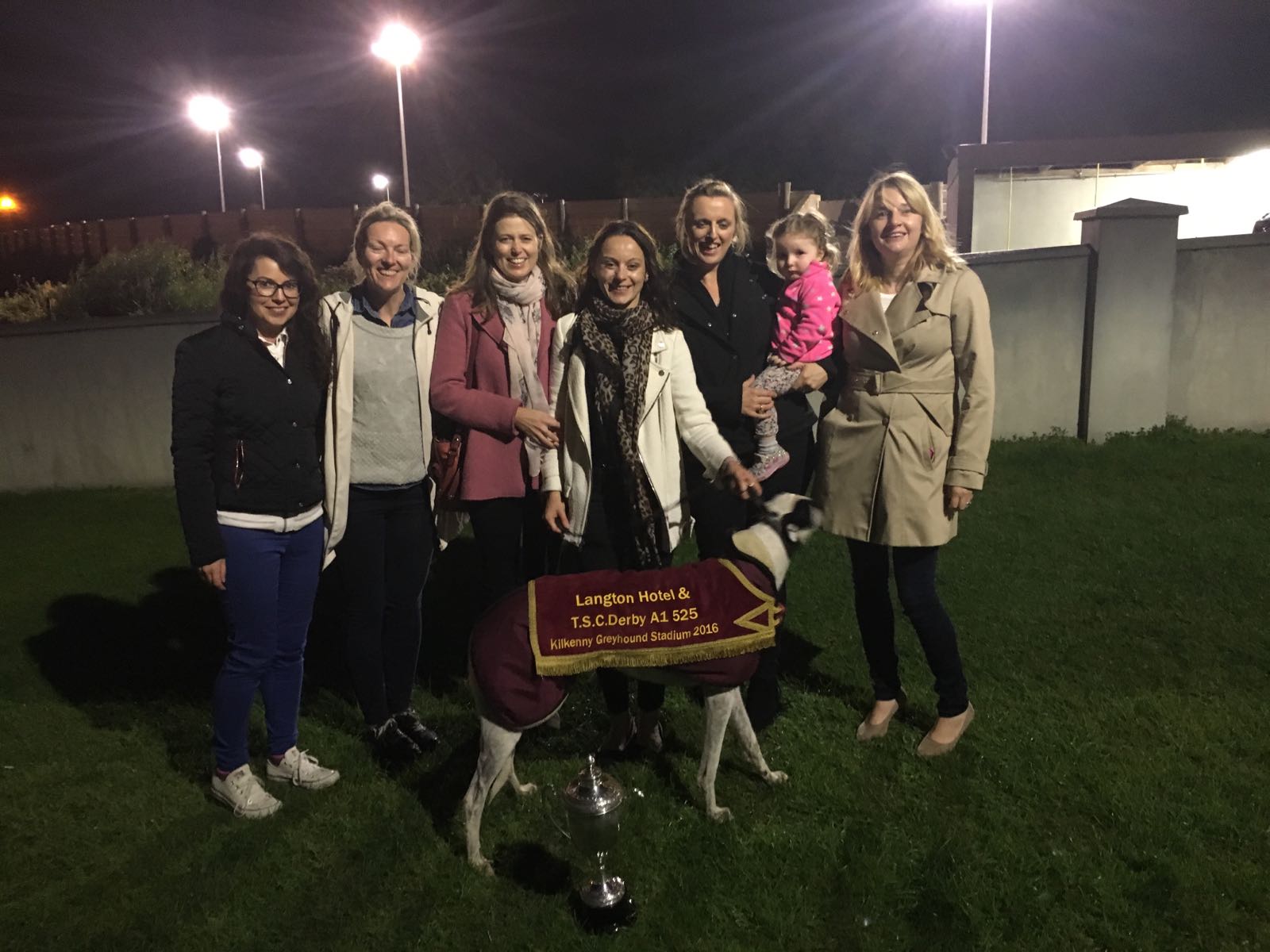 The Glamour Paws Syndicate has been hugely successful and although Scolari Me Daddy’s career was interrupted with injury, the eight glamorous ladies who make up the syndicate enjoyed a wonderful start with a Derby quarter finalist who was one of the fastest of his generation. A second runner followed who was naturally always going to be a son of the now successful sire and Me Daddy Rocks was another smart sort, reaching A1 while bridging the gap to the arrival of Me Phat Daddy.

The syndicate ownership experience is one that Aileen, thoroughly enjoys and along with her family, truly believes that it has a very important part to play in the promotion of the sport.

“We had a great start in fairness and not everyone is going have a dog as good as Scolari Me Daddy who will end up at stud. I would like to think though, and I do believe, that even if the first dog had turned out to be less than average, we would have kept the syndicate going.

“With us, it was myself and my sister Kathleen that started the syndicate and we were lucky to have dad doing his best to get us a good one, which in fairness he always does for a syndicate because he wants them have a good experience and promote the sport. But our other six girls have had a great experience and really gotten into the whole thing.

“I don’t think people realise enough just how easy it is to do it. We just started off with €100 each and put €30 a month into it after that. When you think of the cost of entertainment these days, it’s for nothing! All you want after that is someone to take control of things and Aine Costello does that for us thankfully, she’s great. Poor auld Dinny would never get paid if it was left to the rest of us!

“I know we’ve been lucky but we’ve never had to put any extra into the pot, even with Me Daddy Rocks who wasn’t as good as the other two. Making money out of the syndicate wasn’t the priority but we’ve been lucky and we are in profit, especially with the few bob coming from Scolari Me Daddy’s matings who I must thank all the Dunphy Family for. They have been great to deal with, we couldn’t praise them enough.

“Our aim every year is to have the price of a good night out at Christmas and thankfully we have been lucky enough to do that every year so far. We would take a few a quid each out of the pot after a big win like the stake at Kilkenny but otherwise it stays in the kitty so that we’re always ready for anything that might crop up.”

Of the eight members, it is only the Lennon sisters Aileen and Kathleen who were involved in greyhounds prior to the formation of the syndicate but the remainder are now firmly converted race goers with Aileen explaining, “Yeah there mad for it. Like I said, they have had a great experience so far, lucky really. But we all go racing as much as possible, none of us want to miss him racing. There was two missing for the final last week but they had good excuses. One of the girls had a wedding to attend but Karen Fitzpatrick was giving birth to her first child, a baby girl arrived who on Sunday morning!”

Asked about the naming of their dogs and of the syndicate Aileen exclaims, “Oh Karen is the glamorous one, the rest of us just follow but we have done some agonising over the naming of the dogs. We were taking ages to come up with a name for Me Phat Daddy but the forms had to be sent away and my brother Tom, doing a bit of messing with us, named him Sugar Lollipop and sent it away!
“Now we weren’t having that and Dinny wasn’t best pleased with it either. He came back from the track after giving him his first trial and said to me, you may go and change that fella’s name fairly quick. I was happy enough to hear that because it probably meant he was decent so I tried first to get Whos The Daddy but that was a registered prefix. Now Phat is supposed to mean cool but not everyone in Ireland gets it, so we still get a bit of stick about the name. It’s still better than Sugar Lollipop though!”

The ownership history of the Glamour Paws Syndicate is a wonderfully successful story and they have shown that for minimal investment and admittedly with a touch of good fortune, syndicate ownership can be a fruitful and exciting way to be involved in greyhound ownership and we wish them all the very best of luck as Me Phat Daddy prepares for the Waterford Masters and beyond.

If you wish to learn more about greyhound ownership or the formation of your own syndicate, you will find all the help and information you need on http://www.igb.ie/ownership/ where you can download our ownership brochure, syndication registration forms or read about more successful syndicates and their own individual approaches to owning a racing greyhound. Also don’t be shy in asking the many friendly greyhound folk you will encounter at your local track, you will find that are all only too happy to welcome new owners to the sport and help in every way they can.