Classic competition action in some of Ireland’s most prestigious events will proceed at an unrelenting pace over the coming months and one syndicate who look set for an exciting participation in that top flight is the proud group of friends who came together to purchase Killeacle Wayne (Burnpark Champ/Bearhaven Ekki) in the hope that he can deliver a final night to remember on the biggest stage which continued with his tilt at the 2017 Irish Independent Laurels at Curraheen Park.

The Very Quiet Syndicate comprises of eight members with Killeacle Wayne their first venture together and speaking with Patrick Reidy ahead of the Laurels second round heats, he expressed his delight at negotiating a tricky opening night heat when third to Away Jet in 28.40.

A promising prospect since the very outset of his career, Killeacle Wayne reached A1 grade in victory at the second attempt and would go on to reach the final of the Munster Juvenile Cup at Clonmel. The October 2014 whelp would later sign off on his puppy campaign when chalking his first AA0 mark in A2 stake victory at Tralee, posting a slick 28.48 and it was this level of form in the Kingdom which prompted the attentions of the local syndicate.

Purchased in early 2017, Patrick explains, “There’s eight of us in the syndicate and the decision to buy Killeacle Wayne actually happened over a game of cards one night. I’d be friendly with Liam and Shane Dowling and would often meet up with them in Ballmacelligot from time to time. They’d be well up on all the dogs at Tralee of course and knew that there could be a chance to buy this fellow, so it took off from there really.” 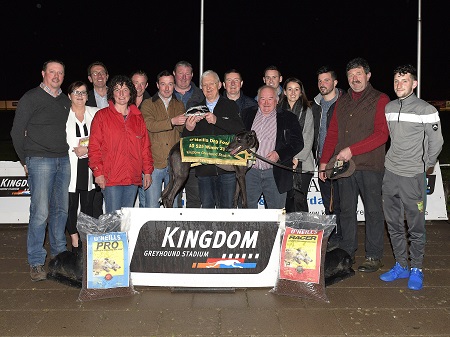 Believing syndicate ownership to be ideal for newcomers to greyhound racing Patrick continues, “of the eight of us, most have experience in greyhounds for many years so a syndicate coming together like this was always likely but there are two friends of mine for whom this is their first dog. The syndicate is a great way to entice new people. For handy money you can get an interest in a good class of dog like Wayne and with seven or eight members like we have, you can keep it affordable. If you’re lucky then you can keep it moving forward, it’s a great way to sell the sport.”

Under his new ownership with the Very Quiet Syndicate, Killeacle Wayne continued his impressive career path which brought victory in the O’Neill’s Dog Food Open 525 Yard Stake, again at Tralee, before an unlucky elimination at semi-final stage of the Riverside Oscar Open 525 at Cork. Next stop for the impressive Liam Dowling trained runner was Towcester for a tilt at the English Greyhound Derby but Patrick admits that he simply didn’t take to the track.

“Well it was planned from the outset to head for Towcester but you could say that it was as part of the Dowling team more so than a specific target for himself. I think Towcester was the same for everyone, almost a trial and error, you had to take your chance and see if it would suit. I tell you though, he didn’t really handle it well, he went out in the first round. He was seeded wide and he went wide, it just didn’t work out.”

Returning from the UK, Killeacle Wayne made his next appearance in the Race Of Champions at Tralee where a third place finish in the semi-final saw him just miss out on that final when chasing home Native Chimes in what was then a record run for the 550 yards. On to the Laurels at Cork and the following was Patrick’s assessment of Wayne’s opening round effort when speaking before the second round heats.

“It was great to get through the first round in what turned out to be a hot heat but he has another tough one again on Saturday. He’s well drawn though in four. We like the middle for him more than the wide outside so hopefully he can come away well and if he does, he should qualify.”

As it turned out, Patrick was right to be hopeful ahead of that second round heat in which Killeacle Wayne ran with great credit but having negotiated the opening bends without significant interference, his powerful back-straight charge was only rewarded with a hefty bump at the third turn when appearing certain to qualify at the very minimum. Relegated to his fifth place finish behind Barefoot Painter in 28.20, his was an extremely unlucky elimination.

“Honestly, we are disappointed. But more for the dog than ourselves. He was running a great race until he got baulked. He was flying down the back and one of the lads beside me says “he’ll win this yet!”, that’s how well he ran. It was a hot heat in 28.20 but he was definitely doing somewhere between 28.30 to 28.40 if he had been clear at the bottom bends.

“Ah, it’s not the end of the world either but he was in such good form that you could get through there, maybe qualify again the next night and then you’re in the thick of all the excitement with dreams of winning a big one. But that’s dog racing for you!
“We’re still very happy with him. He was bought to contest the big competitions and he’s still a very good greyhound at that level so going forward you never know, he might get his luck in the next one. All the lads involved are sporting people and understand the ups and downs of racing and he is giving us a great run.

“That’s the beauty of the syndicates. You can bring friends and have a craic. Winning a few quid would be alright too and in fairness we got that when he won the O’Neill’s Stake in Tralee. We even backed him that night so we already have a few quid back in that regard.

“I’m not fully sure on the plan yet but I only live a few miles from the Dowling’s so we’ll talk during the week. I’d imagine Shelbourne for the Derby would be part of it. Liam and Shane are two very honest and straight men to be working with, you couldn’t be with better so we’ll go with what they say.”

Patrick was very pragmatic in the wake of elimination from the Laurels which is quite fitting as part of a “very quiet” syndicate but maybe also because he has been in the thick of big competition in the past and many readers will recall the career of Balie Mhic who he owned with good friend John Breen which included heat victories in both the Laurels and English Derby.

A fellow member of the syndicate also brings connection with an Irish racing superstar as Des Grace was a former owner of the brilliant early pacer Quietly and Patrick attributes the naming of the syndicate to him.

“Well I could tell you that the name came about because we are all kind of laid back people. Now we’d be plenty capable of going mad if we won a big one but really it was more Des and Quietly that the syndicate name came through.”

There can be no doubt that Killeacle Wayne was extremely unlucky on Saturday last but he remains a big player on the Open scene going forward as he has repeatedly looked well-at-home while doing battle with some of Ireland’s top trackers. He is another shining example of how greyhound racing can bring sports-minded friends together in search of racing success but more importantly, to share and enjoy the entire racing experience at venues across Ireland, and in Wayne’s case, beyond!
We wish all members and connections the very best of luck going forward and will follow their future endeavours closely with Killeacle Wayne which will hopefully bring that big final night to remember.