Even for the most experienced of greyhound owners, each new pup or racing recruit brings with them a fresh hope for what may lie ahead in their impending career and while the classics are reserved for only a lucky few, our sport is perpetuated and survived in the main by kennel stars who will rarely grab the major headlines but who are, for their adoring owners, superstars of a different form as they endear themselves in varying ways to lucky owners who wouldn’t swap them for the world! 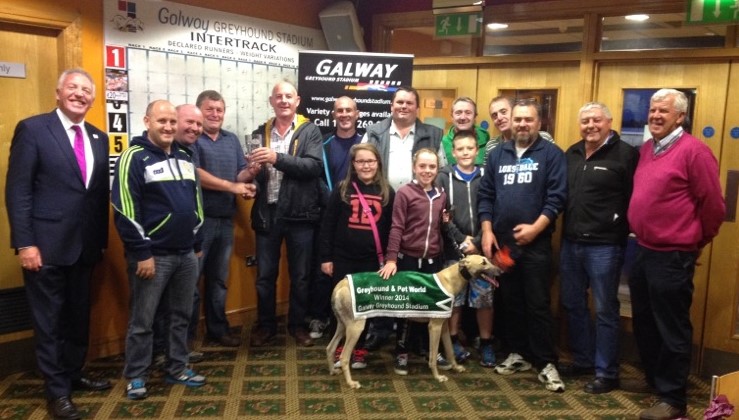 Many can go under the radar with superb personal achievement but deserving of any and all limelight when recording his twentieth race victory at Galway in early February is Jasons Pedro (Cashen Legend/Ballyfidora Pal), owned by the Gurteenree Syndicate of Feakle in Co. Clare, for the game early pacer was remarkably registering victory for a fifth calender year in a row!

Approaching five years of age, the May 2012 whelp scored his first win in a Galway sprint back in November 2013 and reaching a career high mark of A1, retains an admirable level of form given that his latest victory came in A3 grade where his early pace can still prove a potent weapon and syndicate member Damien Pepper reports Pedro in fine form to continue racing into the foreseeable future.

Damien says, “Yeah he’s in good auld form. He ran again at the weekend finishing third but he probably wants to go down a grade at this stage. He has great early pace but with the heavy going at the moment, he’s just struggling to stay on really. Actually he has a bit of a quirk where he eases off at the third bend, I don’t know why it is with him but he’d have a lot more races won only for it.

“But he’s always trying his best, he’s very genuine. We’ve been lucky with him and particularly as he has never had any real injury concern so that has helped him to stay racing at this age. He has a great bit of fire in him and he’s still full of life. He loves to be busy so while he’s still enjoying it that much, we’ll keep tipping away with him.

“There’s seven of us in the syndicate and it was originally started back a few years ago to buy a horse but that fell through for different reasons and one of the lads said that Paddy Moloney in Scariff had a dog for sale, so that’s how it started. Pedro is our third dog in this syndicate so we have been going a while now and actually bought him from Noel Power when he had already a few races under his belt.

“Stevie Murray was training him at the time and of course the dog stayed with Stevie who had been highly recommended to us. He has a busy kennels there but he’s very easy going and he has great help from his daughters Aisling and Rachel who are brilliant with the dogs. I’m actually involved with a few syndicates and many of the owners in the kennels are kind of mixed up in different dogs so we have some very enjoyable nights.”

With an enviable career record having filled a place in the first three on fifty occasions from 79 races, Jasons Pedro didn’t take long to repay his owners once bought and registered the first of two hat-tricks soon after. An A5 stake victory in August of 2014 however brought his career best run in the final and proved the syndicate’s most memorable achievement in support of their game racing star.

Damien continues, “we’ve had some great luck with Stevie in finals actually but that win was great because we have a family pub here in Feakle, Peppers Bar, which would be a traditional irish music pub and the night of that final we had an annual festival in Feakle so arrived back into the middle of it with the Cup after winning the stake in Galway, it was mighty craic.”

Of the seven syndicate members, Damien and his dad Gary along with neighbour Mike Nelson keep greyhounds of their own with five currently residing at the home kennels while joining them in the Gurteenree Syndicate are Mike Tuohy, Declan Minogue, Tim McGrath & Brian Moloney and all are local to Feakle.

The syndicate have an upcoming appointment at Limerick Greyhound Stadium on March 25th where they will be present to support the Feakle GAA Club who hold their annual fundraiser at the track but they can still have many more nights ahead in support of Jasons Pedro also.

“Yeah, he’s going to keep racing for now anyway. He has been some servant and has always paid his way for us. He hasn’t cost us a penny and given us some great times so as long as he’s happy racing we’ll let him do it, and he genuinely loves it!

“We kind of work together with Stevie now and I might keep one here for him an odd time so when Pedro is finished racing, he’ll come back here too for his retirement. It’s gas, over the past few years as the dogs have been winning a few finals, we have found ourselves replacing some pictures on the walls of the pub with pictures of greyhounds but Stevie’s wife Carmel joked with me lately that when Pedro dies we’ll have to get him stuffed and stick him up on the wall!”

Clearly endearing himself to his knowledgeable owners, the career of Jasons Pedro is a credit to all involved with the persistent care and attention that is required to maintain such an extended, competitive career. Scoring victory in five calender years is testament to his own vast resolve and to still be gaining wins in A3 grade approaching five years old is laudable in the extreme.

A high quality graded runner, he represents the large majority of competitor in the sport which fill our race cards while drawing enthusiastic support through the turnstiles and deserves every supporting cheer from his connections. We wish him a successful and safe journey through the remainder of his career. As a beacon for honest endeavour in the sport, he will remain a star in Feakle whether he ends up on the wall or not!