Famous Five make Derby bid with king of the Castle!

Famous Five make Derby bid with king of the Castle!

For many in greyhound racing, the dream of being involved with a Derby runner can remain just that, a dream, which can easily elude even the hardest working owners for an entire lifetime. That could very plausibly have been the case for Michael Farrell of Cahir who resisted the possibility of a break from greyhound racing and now finds himself with a Derby contender of real merit as head of the Famous Five Lads Syndicate.

A young Cahir Castle (Ninja Jamie/Sporting Dame) will represent the Tipperary based syndicate in Heat 13 of the 2016 Boylesports Irish Greyhound Derby this coming Saturday at Shelbourne Park and gives Michael a first Derby runner following thirty years of ownership. Of the remaining members in the syndicate however, he explains that for three of them, this is their very first track dog!

“We’re all from Cahir so know each other for years but Philip Shealy is the only one other than myself who would have any experience with greyhounds before we formed the syndicate. We have David Walsh of the Cahir House Hotel, Michael Duggan and Kevin Fogarty. Now we did start the syndicate with a Coursing bitch who unfortunately didn’t turn out to be good enough so the lads didn’t get much good out of that when she was losing in the first round all the time. 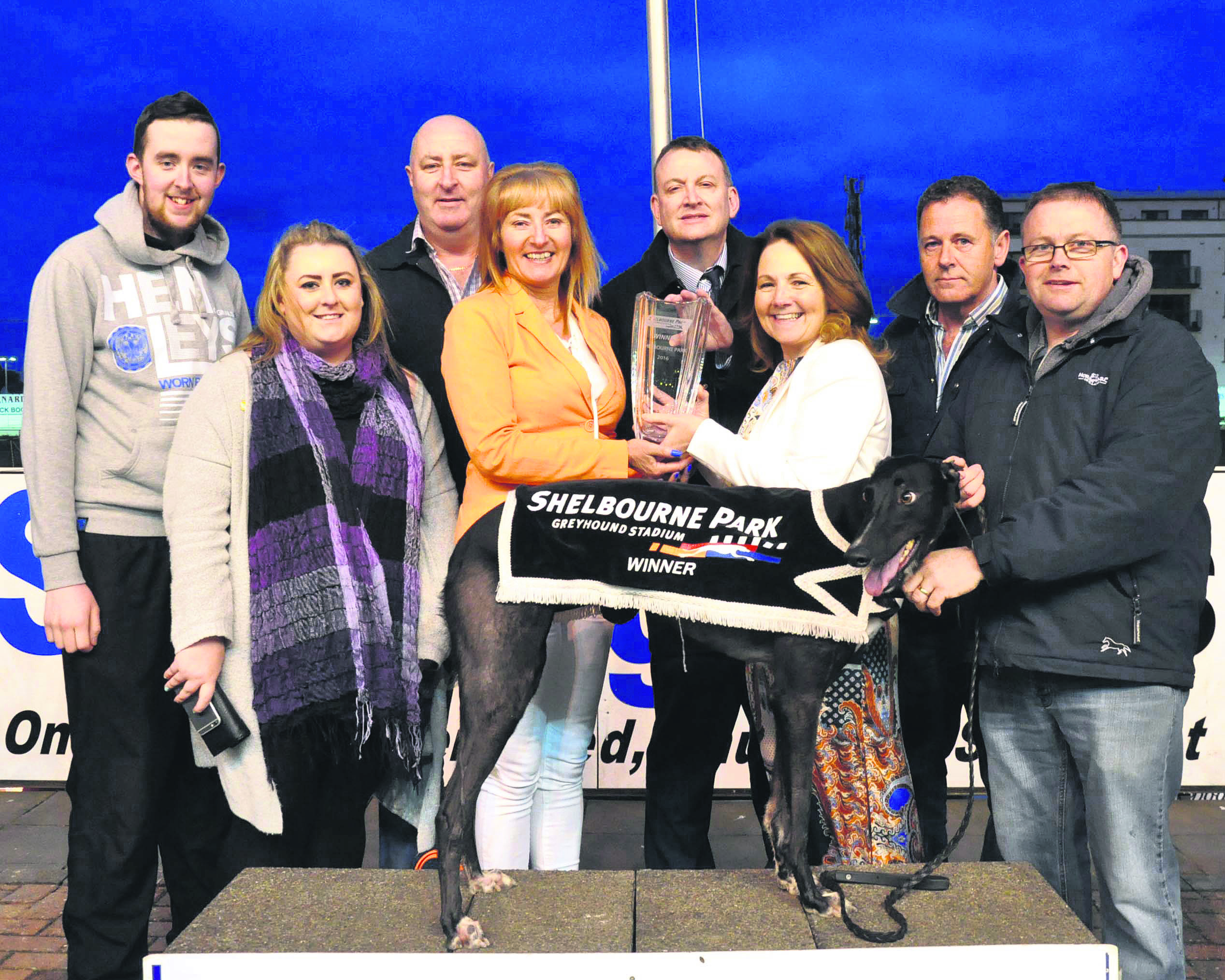 “We were in Clonmel for the festival that year, 2015, and we were asking the question, would we start again with another Coursing dog? For the sake of the syndicate and to try get a few good nights out, I said we’ll go with a tracker instead, it would be a better experience for the lads. If he turned out to be average, he’d still win a race or two and they’d get more craic that way.

“I wouldn’t keep too many here at home, only one or two really but I would often rear a couple for a friend Mike Roe and we’d do a deal that I’d keep a pup. He sent me off to Jerry Griffin anyway this time to pick a dog and a bitch from the litter and I had a choice of three dogs, I think I came away with the right one! Anyway, it was my turn to keep a dog this time around so that’s how I came to have him and he became the next one for the syndicate.”

Cahir Castle began his career with defeat following significant baulking on debut at Kilkenny but switched to Shelbourne next time, completely demolished A3 company in a 12 runner stake when clocking a brilliant 28.15 in just his third career start.

Asked if he knew this level of performance was imminent in that May event Michael explains, “well I had given the dog to Tommy Dunford at the start of the summer because it’s my busy time of the year and I didn’t want him missing out on anything. Tommy gave him a few trials and really there still wasn’t any major clues that we had a Derby dog. As Tommy said, he was going the right way!

“I had him back myself then but he got a problem with his hock, some sort of a bite from something or other and that took a lot of time and work to fix up but I was in no rush with him. When he was OK again I gave him a trial in Clonmel and he went right well. The track was very slow the same day and there wasn’t a dog break 17.00, but he did! That was his first official mark, 16.70, and without much fitness work done so I said to myself, you can run alright!

“I rang Owen McKenna shortly after that and asked if he would take him. He said give me a couple of weeks, I was delighted that he took him. I have to thank him for everything actually, he has been very good to us and all his family, they’re a pleasure to be involved with. Anyway, he had a trial with Owen and I don’t mind telling you at this stage it was 28.75 around Kilkenny. So when he told me, Michael, this is a top class dog, it was time to get a bit excited.”

Cahir Castle has had only seven races ahead of his Derby tilt but further enhanced his credentials in his latest outing of mid June when impressively overhauling Anopheles close home, posting 28.33 in a strong staying short-head victory. An intended appearance in the ECC Timber 550 Yard Puppy Stake was bypassed having suffered just a minor setback but Michael is not overly concerned about the lack of a recent race.

“Yeah it’s fair to say he’ll be going to the first round plenty fresh enough but Owen will have him spot on and if things went well, he should improve for his early runs. Sure all we’re really hoping for is to get through a round or two, that would be brilliant. Of course you’re going to dream but you couldn’t say that getting knocked out of the Derby would be the end of the world for our dog, whenever it comes. He only turned two in June so we have plenty to look forward to beyond the Derby.

“Although, David Walsh might say otherwise. He says to me about two months ago, when we thought he was going for the ECC Timber, that he had a dream the dog won the Derby. I hope he’s right!

“Ah it’s great and I think the lads are fairly excited but in fairness you wonder if they really know how lucky they are, being so new to it all. This is a dream, you can’t deny that. I didn’t think I’d ever have a dog this good and but for Michael O’Donovan and the great Eddie Wade giving me a few dogs to school up from time to time, I could easily have taken a break from the game. My wife Elaine is a saint, she does all the walking and only for she understands the sport so much, I could be divorced long ago!

“I’m not nervous really because I’m not going to think about it. I’m just glad to have found a dog of his quality after thirty years of it all. Once he comes off the track safe after every round, win or lose, I’ll be happy! He has done everything right from the day I brought him home. He’s a calm clean kenneller and very, very genuine.”

With such an impressive start to his racing career it was inevitable that Cahir Castle would attract much attention from prospective new owners and Michael confirms that the Famous Five did turn down a substantial offer.

“We did, we got a serious offer and the truth is we called a meeting of the syndicate to discuss it. We had a ballot, each had a vote to sell or keep and all five revealed keep! So we have all bought into the dream!”

Michael watched the Derby draw live on Monday morning and despite being drawn in a very tough heat 12, expressed delight with his trap 1 draw as Cahir Castle will seek the rails at the earliest opportunity in his races. With five to qualify, the syndicate hold strong claims of progressing to round 2 and we wish them the very best of luck throughout a first Derby campaign for all involved.

Cahir Castle has already delivered for his proud owners and represents a reward for many years hard work on Michael’s part while also giving hope to every new syndicate or future owner that anything is possible when first venturing into greyhound racing.
In closing I asked Michael what was so famous about the five lads. “Nothing really, it was just one of those pub conversations about old TV shows. You remember the Famous Five and they had a dog too?!” I then put it to him that they might find fame over the next six weeks at Shelbourne Park and Michael laughed, “I hope you’re right!”