Cats aim to be on top at final Belle!

Cats aim to be on top at final Belle!

Arguably the two most inherently Irish of all Irish pastimes, the GAA and Greyhound Racing have been intrinsically linked throughout generations of feverish participation in a sports hungry nation. How appropriate it is that the Senior Inter County Championships in both Football and Hurling draw to their conclusions during the five weeks of Irish Greyhound Derby action at Shelbourne Park when both associations crown their ultimate champions of the year.

Greyhound Racing welcomes GAA Clubs to tracks all around the country for social gatherings, fundraising events or simply for a good night’s craic, all throughout the yearly calender where the interaction of young and old from both sports is as healthy and enriching a social endeavour as the respective governing bodies or marketing departments could ever wish to achieve.

With a full appreciation of this wonderful association and upon first seeing the racing name of Cats Belle (Tullymurry Act/Lemon Belle) on a Kilkenny programme in late June, it was with much certainty that I could assume to be making contact with her owners for this column before the now almost inevitable appearance of Kilkenny in the All Ireland Final for she is owned by the Kilkenny Senior Hurlers Syndicate.

Chief instigator of the syndicate which contains most of the Kilkenny starting fifteen is Chairman of the Kilkenny Supporters Club John Mackey. Many in Greyhound Racing will know John who has raced his own track dogs under his “Foyle” prefix and he explains that the venture is mainly down to himself and 2008 Hurler Of The Year Eoin Larkin.

“Well as Chairman of the Supporters Club I’d know all the lads very well and you’d have plenty of gatherings and chats after games. The idea of forming a syndicate came up at one stage and sure Eoin has had a few dogs himself up and down so it just took off with us really but there was loads of the lads interested which was great. I drove on then and spoke to Tom & Dinny Lennon and they had one lined up for us in no time.”

The breeding of Cats Belle will have already caught the eye of greyhound enthusiasts, as indeed would any from the prolific “Lemon” breeding kennels in Threecastles, for she is a half-sister to the 2016 Sporting Press Irish Oaks winner Witches Belle. Her dam Lemon Belle has thrown top quality racers in every litter and although this Cat has yet to sample the euphoria of victory that her owners have become so accustomed to, the signs are a plenty that she will enter the winner’s circle sooner rather than later.

Cats Belle has raced five times and they have been almost identical defeats. Slow breaks have seen her trailing in the early strides, finding bumping and crowding before eventually securing racing room to go in search of a leader who has simply gotten too far ahead of her. However, every run has seen her display exceptional pace, especially from the second bend to home and a first win would appear imminent. In fact, she appears capable of much better than her current A4 grading would suggest, an assertion that John Mackey concurs with.

“Well Tom & Dinny are looking after her and she could not be in a better place. Like, I think it’s twelve of us in the syndicate and that makes the whole thing very affordable anyhow but Tom & Dinny couldn’t be kinder to us in that regard either, you couldn’t say enough good about them.

“It is a pity that she hasn’t won a race yet but she has been quare unlucky really, unreal almost! She’s not breaking at all. You’d like to think she will eventually but even at that she has shown exceptional pace, she’ll do a big run yet!”

It’s only natural that Cats Belle should have started her career at home in Kilkenny but Tom Lennon and John himself acknowledge that a change of scenery may be needed to ignite her career and bring out that seemingly inevitable “big run”.

“She was actually due to run at Thurles this weekend with a step up in trip to try give her a chance but she’s had a small setback that will keep her off for about a fortnight. We’d love to leave her at Kilkenny with Tom Kinane, he has been so good to us. I have fierce admiration for that man, he’s a true gentleman and he couldn’t have done more to help us with any little thing we needed. Still, it’s the right thing for her own sake at this stage and sure Tom understands that too but hopefully she will be back to Kilkenny at some stage.

“We’ve had great nights with her so far and sure hopefully there’ll be many more. You take it, at this time of the year, the lads are training hard and nights out would be limited really so a trip to the dogs is ideal, and they do go! They were all there the last night when she was second in the final and none of them misses a race if they can help it at all.

“There has been evenings there where they’d come straight from training and wouldn’t go for the meal back at Langton’s until after the race. Or, they have also started training sessions early so that they’d be finished in time for her race. It’s a great outlet for all of us and we have a few quid on her too if we fancied her, which we did the last night but honestly none of them cared that she lost, only that she came back to us fit and healthy.”

One of the greatest wishes for any new syndicate is that the experience of those owning their first greyhound will find it a rewarding venture and maybe keep them in our sport long into the future. While John Mackey and Eoin Larkin are here to stay, such is the interest they have created amongst the syndicate that they now will extend their presence in greyhound racing by again purchasing from the Lemon Kennels with a dog pup for next year. So, just like the hurling, it appears that these Cats are here to stay!

I couldn’t end this gratefully accommodating conversation with John without his prediction for this week’s All Ireland Final and he offered a far from biased opinion. “Honestly, both of them are going to give it a right rattle and I’d only just favour our lads. It’s almost too tight to honestly call. What I do really hope is that everybody on the field has a good game. The hurlers, the ref, umpires, linesman, the whole lot of them because it’s going to be that tight!”

As a true blue Tipperary native myself, I will echo John Mackey’s sentiments regarding Sunday’s hurling decider at Croke Park while also wishing his syndicate and all panel members the very best of sporting luck. I will fervently cheer for a Kilkenny defeat but sure who could expect any less?

However, win, lose or draw, I will look forward to meeting the Kilkenny Senior Hurlers Syndicate when Cats Belle arrives for racing at Thurles, where Liam McCarthy will hopefully be resident at that point. I will, like all the greyhound racing community wish her well in search of her first victory and the many that will hopefully follow as she rises through the grading table, providing many more entertaining night’s out in another wonderful sporting association between the GAA and Greyhound Racing. 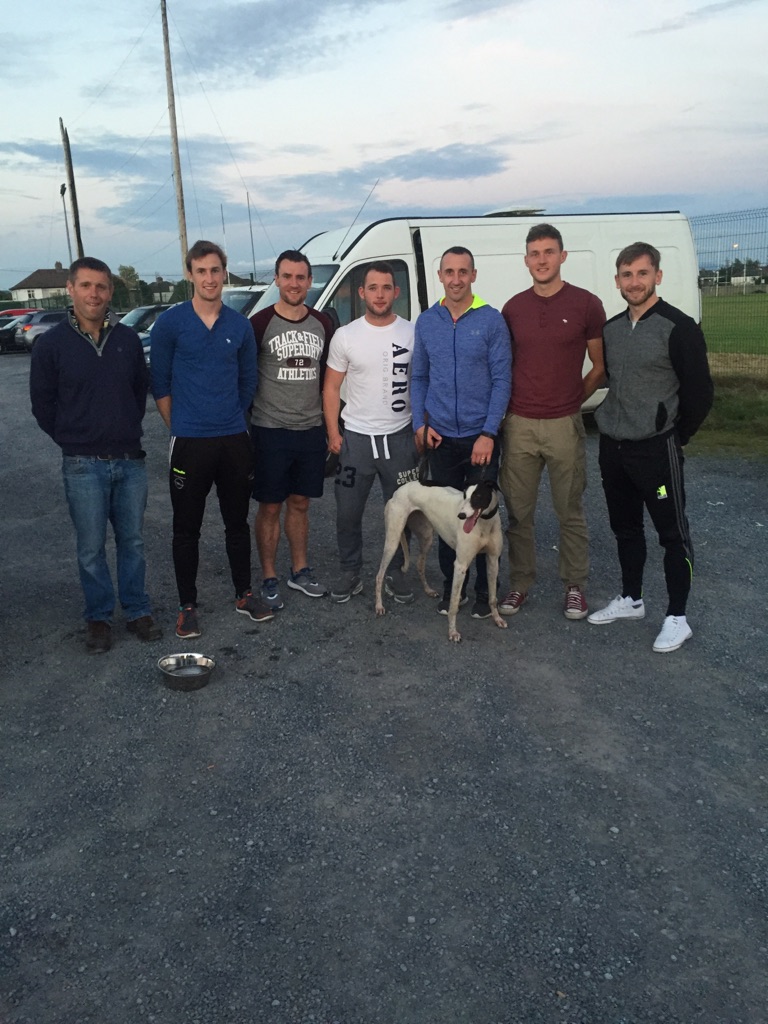