Our People, The Generations

Meet some of the families in irish racing

OUR PEOPLE, THE GENERATIONS

Now we meet the Generations.

We're very excited to bring you the next chapter in the Our People series: Our People, The Generations.

The hundreds of years of tradition that forms our sport.

The generations of families brought together

by their love of the dogs.

We stand for all that is good about our sport

and we are its future.

Meet the Maguires from Co. Waterford - Jimmy & Stephanie. A father and daughter with a shared love of greyhounds.

The Maguire’s race under the prefix Daring and have been racing and breeding greyhounds for over 50 years from their home in Co. Waterford. 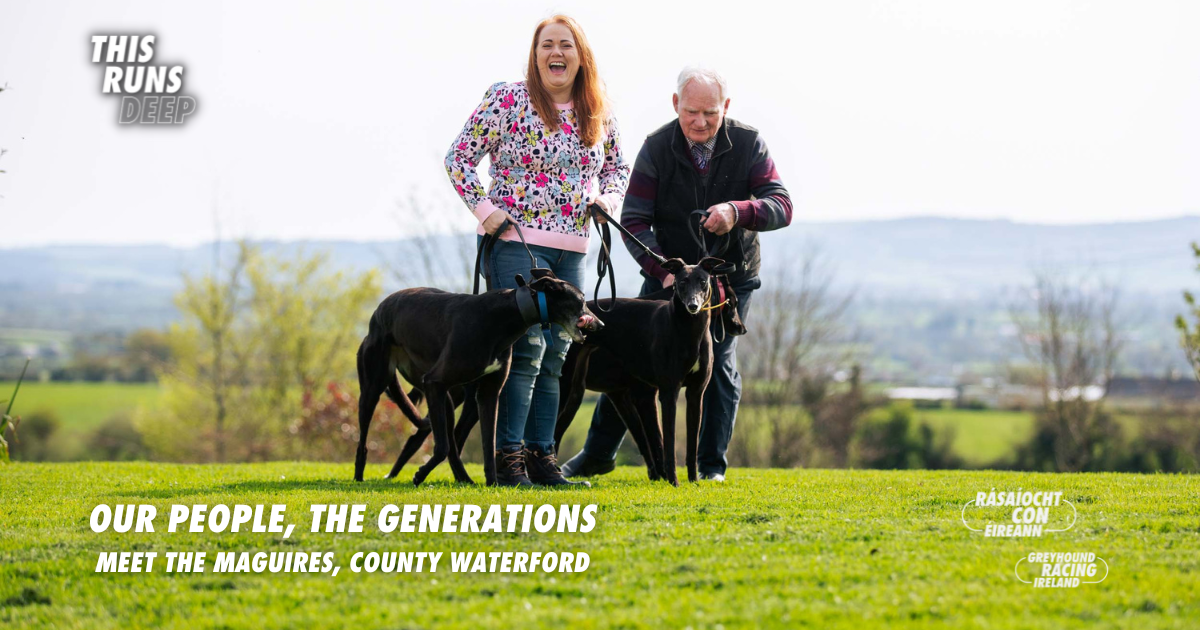 Breeding many a champion over the years, the most notable being Glen Miner in the 80’s, who made it into the Guinness book of records for being the fastest dog over a four-bend track!

Daring Lance was another home bred and owned dog who won the Cesarewitch in Mullingar and held the track record in Waterford.

Jimmy is well known for his volunteer work at Waterford's Kilcohan Park Greyhound Stadium and has held the position of Chairman for the past ten years.

Both himself and his daughter Stephanie along with family friend Peter Woods run the kennels. They keep the kennel small with a few racing dogs and brood bitches (where they welcome one or two litters each year).  They also have several race dogs that they have placed with a trainer.

As Stephanie says, “Greyhounds are in my blood, I grew up with them. We love what we do and will continue to race and breed hopefully another few champions in the future and have a few winners on the track along the way!”

Meet the O'Donnell family from Co. Tipperary. Jim, Shari-Anne, Cian, Aoife & James - a family with involvement in greyhounds in many levels. Shari-Anne wrote a brief introduction to the family for us, have a read to get to know them a little better.

"I suppose my interest in greyhounds started when I met my husband Jimmy who was reared with them.  We were blessed to have great luck over the last few years under the NewInn prefix and it it’s a family affair with my children Cian, Aoife and James always on hand when needed.

It all took off after we purchased a Bitch called “Anytime Soon” who amongst many champions bred NewInn Expert who produced the outstanding “NewInn Taylor”.  His record speaks for itself winning 16 out of 18 races, including both the Produce Stakes and Boylesports Irish Derby.

But with the highs comes the lows, and our hearts were broken when NewInn Wonder, or as he was known to us "Tiger”, sadly passed away earlier this year.

Greyhounds have been a huge part of our lives, and to quote our good friend, the late Maria Byrne, “It’s not a job when you love what you’re doing”.

I’ve made so many friends and met so many amazing people over the years through our involvement with greyhounds, and our ambition is to continue to breed more Classic winners and enjoy every day!" 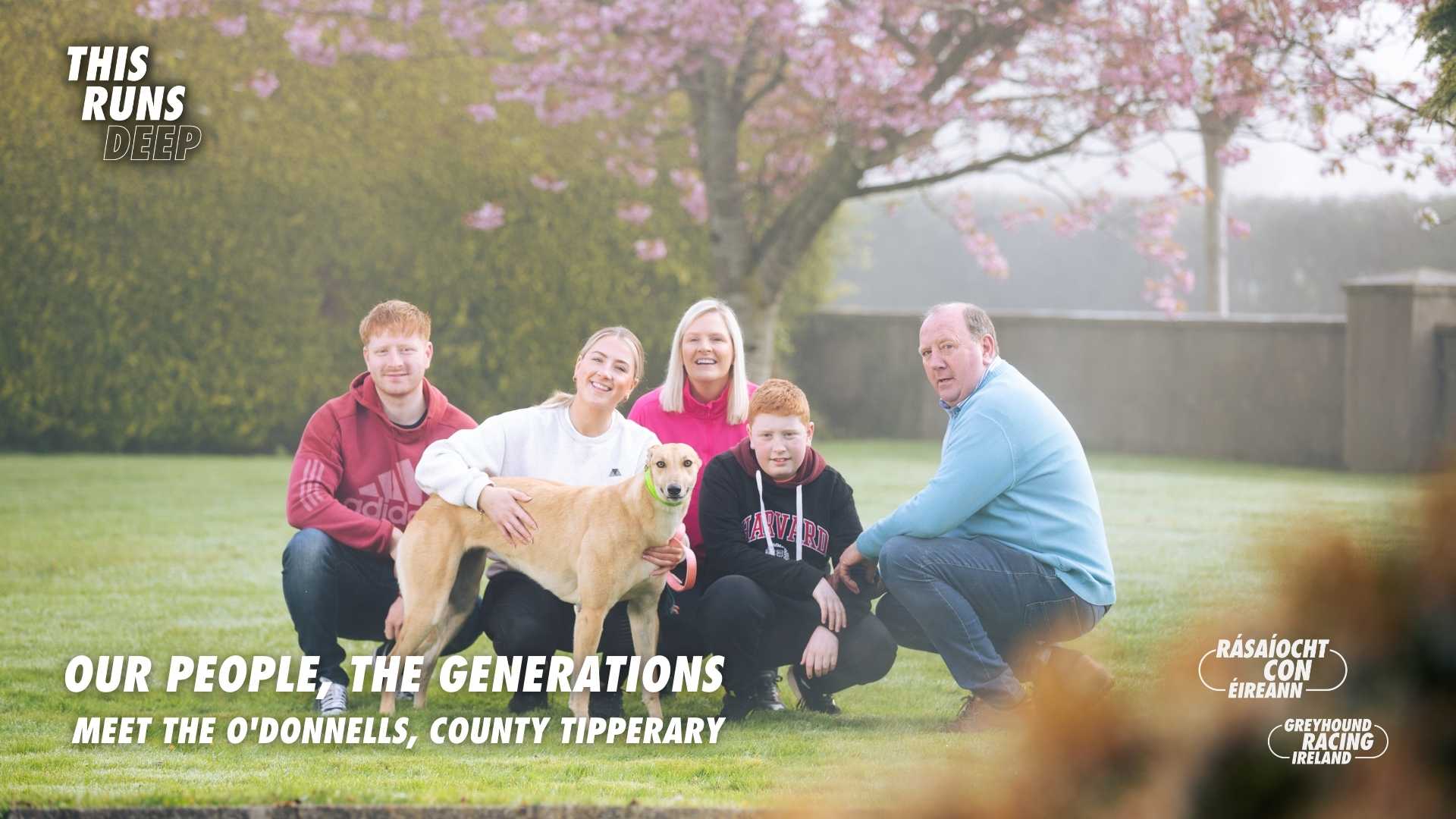 Meet the Carberry family from Co. Meath. Peter and Rita, Avril and Alicia and the children - the generations of one family with a shared love of greyhounds. Get them to know them a little better now.

“It’s just fantastic… the kids in particular. It’s showing them what it takes to care for an animal and how important that animal is in a family. You know, It brings everyone together because you have a shared love for that animal.

And it’s no different with a greyhound than any other dog or any other pet that you would have, you know, these are part of our family, that’s the way we look at it. I can see that in my own kids, developing that compassion and empathy for caring for something other than yourself is just so important and it’s such a great quality that we’re trying to raise our kids with.

And it’s that shared love that has been passed down from generation to generation of the greyhounds and the sport…. Hopefully our kids will continue that through the generations.”

If you cannot see the Carberry's video embedded above, click here to watch on our Youtube channel.

Meet the Murphy family from County Wexford - 4 generations of one family with one thing in common, the love of their greyhounds.

"It brings all the family into it and gets us all working together as a unit, it's a good thing"

Learn more about the family and their story in our wonderful sport now.

The family race under the Ballyelan prefix, a nod to their townland. Greyhounds have a long history in Ballyelan, tracing back to 1934 when Donie’s father Jim began training.

For many years there was no greyhounds in the house, but after Donie & Kathy’s son Donal passed away suddenly in 2006, their children got them two greyhound pups - a routine and focus to help them through a very difficult time. On 6th August 2008, one of those two pups gave them their first winner, the beginning of a new chapter in the Ballyelan story.

Every year the family sponsor the Donal Scanlon Memorial in Limerick, a way to honour his memory and also give back to the sport they love. 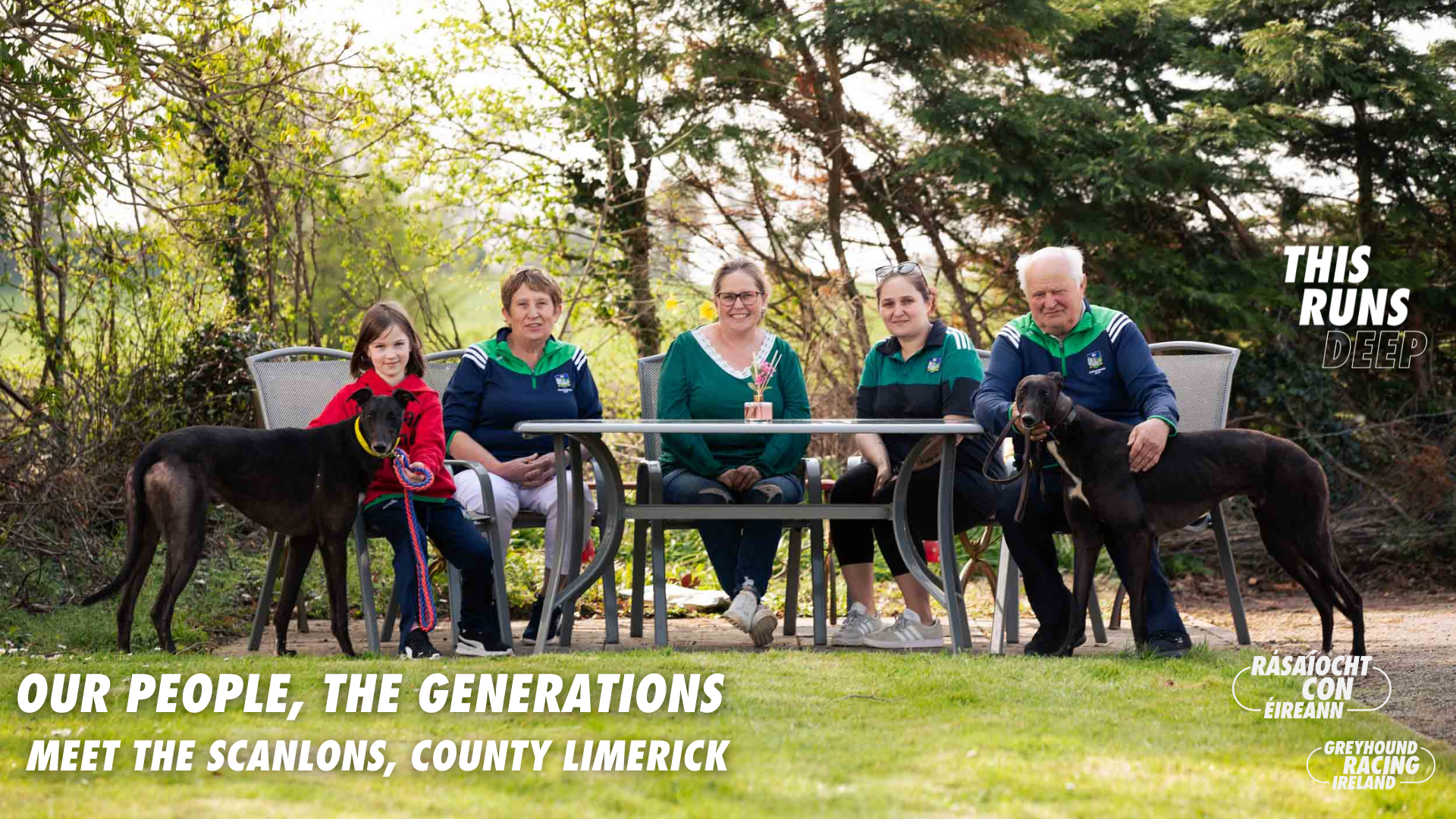 The family run a small kennel with just 6 greyhounds there currently, three racing, one retired mammy and her two 12 month old Pestana pups. Kathy takes charge of the feeding and nutrition, Donie looks after the walking and exercising and when her homework is done granddaughter Kacie arrives to help in any way she can. Kacie is their biggest fan and even has her own Ballyelan clothing range!

Siobhan took the family involvement to another level when she joined the team at Limerick Greyhound Stadium in 2010. In 2014 for her work as Business Development Executive for Limerick and Galway, Siobhan won the Network Ireland Limerick Employee of the Year Award before representing the region in the Network Ireland National Awards.

While Siobhan has moved on to a new job with Limerick GAA, she still plays an important role every spring when the Con and Annie Kirby Memorial rolls around, helping to coordinate the GAA Club involvement.

From Imelda down through the generations to the her young great-grandchildren, 4 generations of the family share a love of greyhounds.

"It's great for bringing families together...."

Learn more about the family, how they got their Catunda prefix and how they come together for what they love - greyhounds! 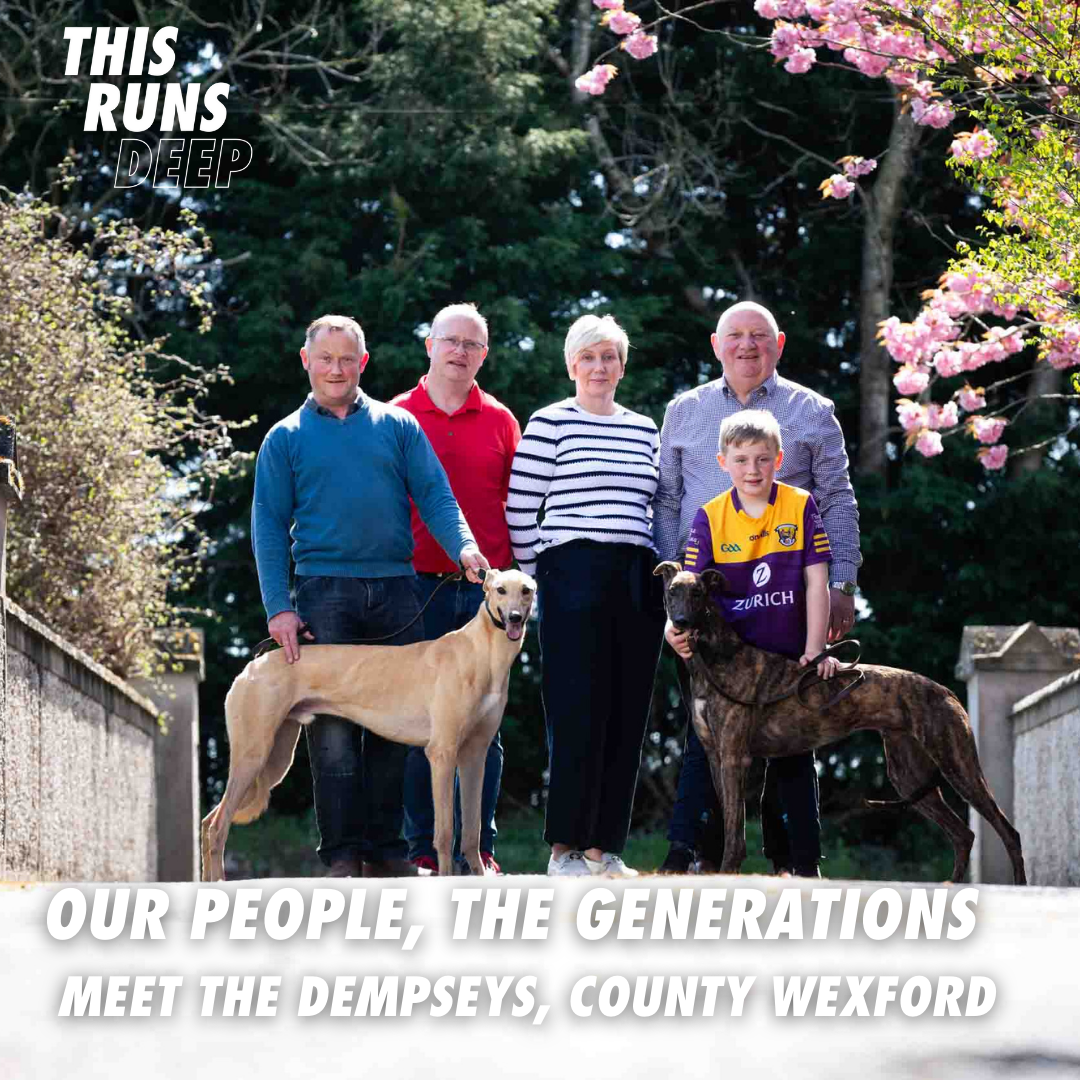 Michael will be recognisable to trainers and owners across the country as he has served as Racing Manager in not 1 but 4 stadia.  He commenced his career in Lifford, moved to Dundalk, followed by a stint in Enniscorthy and is now part of the Leinster Racing Office with responsibility for Shelbourne Park.

Michael & his brother Gary inherited their love of greyhound racing from both sides of the family with both his father's family (The Dempseys) and his mother's side (The Donohues) well known in Wexford greyhound racing circles.  Their maternal grandfather was a Bookmaker in Enniscorthy Greyhound Stadium and his Paternal Grandfather had track racers as far back as the 1930's.

Their uncle Johnny (Donohue) served as a Board Member in both Enniscorthy and Kilcohan Park Greyhound Stadia.

Believe it or not greyhound racing even helped with Michael’s love life! He met his wife Lorraine at Kilcohan Park Greyhound Stadium when she was on a girls night out - so greyhound racing helped to bring them together!

Their son Jamie is now carrying on the tradition as he can be seen helping Uncle Gary on a weekly basis with their racers Sid & Frankie, ensuring that the next generation of Dempseys will carry on the family sport!

This really is family affair as the Fitzgeralds breed, rear and train their own greyhounds in Parteen, Co. Clare. They race under the "Ocean" prefix, which incidentally has been their family prefix since 1928!

Tom is well known in the Mid-West greyhound circles as he is currently serving as the Chairman of the Advisory Committee for Limerick Greyhound Stadium where he also does most of his racing.

One of his own best memories?

It must be winning the Con Kirby Memorial back in 2011. This was the precursor to the popular Con & Annie Kirby Memorial event that is hosted currently.

VIDEO: OUR PEOPLE, THE GENERATIONS - IT RUNS DEEP
THE O'DONNELLS, THE BUGGYS & THE SCANLONS

Across Ireland, generations of families work together behind the scenes in Irish Greyhound Racing.

They all share a love for their greyhounds, a passion for their sport and a deep sense of pride in what they do.

As part of the Our People, The Generations series, we'll be spotlighting just some of the wonderful people in greyhound racing through photos and videos to share their stories. Keep an eye out over the coming weeks to learn about them.

THE DEMPSEYS, THE MAGUIRES & THE MULLINS

BEHIND THE SCENES - A SNEAK PEEK AT OUR PEOPLE, THE GENERATIONS IN THE MAKING