Did you know that greyhounds have been in existence for longer than any other breed of dog and for all that time, have been prized for their speed, grace, agility, hunting prowess and as loyal pets and companions.

The only breed mentioned in the Bible, greyhounds appear in early cave drawings, adorning the tombs of Pharaohs and are celebrated in many paintings, stories and poems. In 124 A.D. The Roman Flavius Arrianus (Arrian) sang the praises of his Celtic greyhound "Horme".

"She is moreover, gentle and kindly affectionate, and never before had I a dog with such regard for myself. When I am at home she remains by my side, accompanies me in going abroad, follows me to the gymnasium and while I am exercising myself, sits down near me. At meals she pats me with one foot and then the other, to remind me she is to have her share of the food. Nothing is as helpful as a soft warm bed. It is best if they can sleep with a person because it makes them more human and because they rejoice in the companionship of human beings".

In modern times, greyhounds, traditionally used for hunting, were introduced to the mechanical lure and greyhound racing as we know it began.

Greyhound Racing Ireland is responsible for the welfare of racing greyhounds, and every effort is made to ensure that they are treated in the most humane manner during training or racing.

All involved in the Greyhound Industry in Ireland should take note of their obligations and duties under this Act.To view the full Welfare of Greyhounds Act, 2011, click here to download. 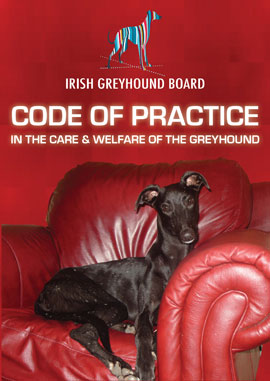