Patrick Guilfoyle made a successful raid on the Kingdom when producing Wi Can Dream (Cabra Firmino-Cabra Angel) to victory in the €11,000 final of the Greyhound & Petworld Juvenile Classic in Tralee on Friday night.

Well backed throughout the day, the winner was sent to traps as the 9-4 favourite and he was smartly away from trap four. Lenson On Ice was drawn outside the winner in trap five and he showed sizzling early pace to lead around the opening turns.

Owned by Lars and Anita Wicander, Wi Can Dream didn't enjoy the clearest of runs on the back straight, but you always felt the June puppy was in prime position and ready to strike. About two lengths behind the leader approaching the final corner, the impressive winner pulled out all the stops to land the spoils. A 28.37 winning performance, a length clear of Droopys Edison, who himself showed massive pace in defeat. Lenson On Ice was a short head behind the runner up in third. 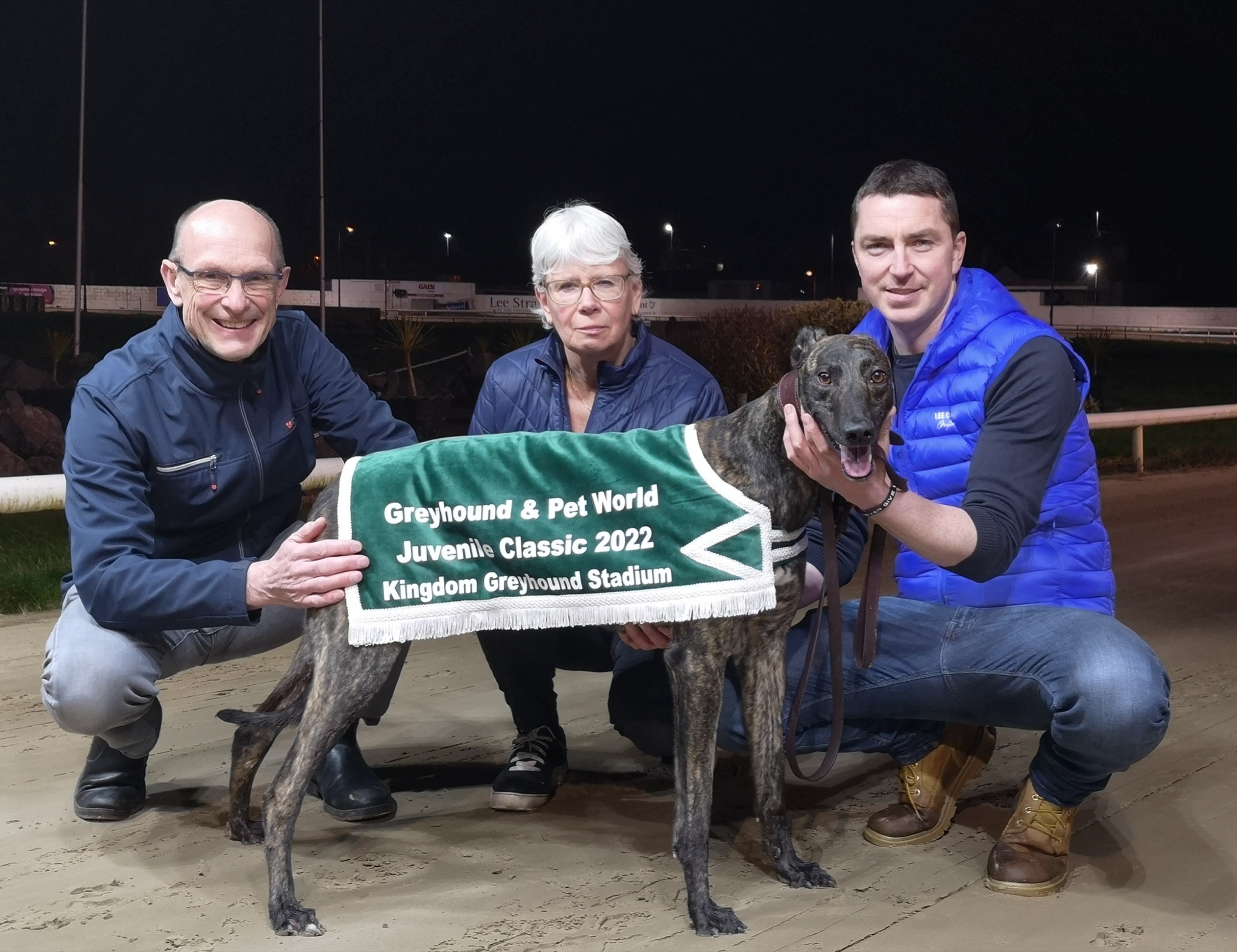 It was a night to remember for team Pat Buckley, five winners on the night which included two track records.

Unlucky to be knocked out of the Juvenile Classic in round two, Ballinabold Ed (Confident Rankin-Dolls Lady) made no mistake when winning the Con & Annie Kirby Memorial Trial Stake in superb style.

Uneasy in the betting market, the June youngster was sent to traps at a very generous 5-2. Once he led around the opening turns, it was clear he was on a big run. Showing huge pace throughout, the outcome was never in any real doubt as he beat Magical Kuba, by a length and a half, in a sensational 28.03. Owned by Brendan Murphy, he will no doubt have plenty of supporters in the upcoming Con & Annie Kirby Memorial Limerick.

In the following race, Explosive Boy was sent off the well-fancied 4-7 favourite but he had no answer to the Pat Buckley trained Bobsleigh Dream (Droopys Sydney-Bobsleigh Jet).

In the ownership of Willie Joe Murphy, the 9-4 shot absolutely flew from traps and she easily led into the opening turns. Piling on the pressure down the back straight, she quickly pulled clear of Explosive Boy. Powering home, the impressive winner came home with six lengths to spare of Explosive Boy, in a top-class, 30.40, another track record on the night. (570).

Unlucky not to reach the final of the Easter Cup, Scarty Yank (Droopys Sydney-Lisnaboy Scolari) finished with a flourish to land the Star Sports/TRC English Derby Trial Stake. Only fourth to halfway, the 4-1 winner looked in serious trouble. However, he was looming large approaching the second last corner, finishing best of all, the exciting talent was in top in the closing stages and he beat the always prominent Good Cody, by three lengths, in 28.37. A head back to Ballymac Merlin in third with a length back to the early leader Seomra Nate in third.

Flashing Willow, trained by Buckley for Kenny Glen, delivered an incredible performance in the open sprint. It looked a red hot contest on paper but the 5-2 winner proved a class apart. Just a May puppy, he showed incredible gears to win with plenty to spare. A special performance, clocking a top class 17.20.

Dubh Gasta (Burgess Bucks-Droopys Mazda) had got team Buckley off to a flyer after winning the opener for owner Darren and Richard Houlihan. The even-money ran out a smart winner in 28.90

Of the other races on the night, Patrick Guilfoyle's Amazing Alice drove a great opening turn when winning the third, in 28.47, at odds of 5-4.

In the previous race, Blacklabel Walt brought his winning tally to four when winning the A2, for trainer Jerry Griffin, in 28.22.