Not for the first time, Susie Sapphire left the greyhound word reaching for superlatives at Shelbourne Park on Saturday night as she ran out a brilliant winner of the BresBet Easter Cup, cementing her status as one of the greatest to ever race on Irish soil.

By this point in her career, there is very little she does that can cause surprise but it’s still difficult to believe that any greyhound can be as slick and polished in the opening exchanges as the daughter of Droopy Jet and Jetstream Lynx.

Just days after being named the Future Star, the Bitch of the Year and Supreme Greyhound of the Year at the National Greyhound Awards, Peter Comerford’s star produced the most perfect display of early speed to get her rivals on the backfoot from the very outset.

A 2-5 favourite with sponsors BresBet during the week, Susie Sapphire came in for even more support on the night and was sent to traps the 1-3 favourite. It’s difficult to believe in a race of such standing, against a field of such quality, that a 61lb bitch can start a 1-3 favourite to come home in front but, it was soon evident, the layers were spot on with their assessment.

Much like her Sporting Press Irish Oaks and Boylesports Derby victories, this was a race that was effectively over after a matter of strides.

Owen McKenna had his star rip to perform. Exploding from the inside box, Susie Sapphire hit the winning line in a scorching 3.31.

It was officially the fastest start of her career at Shelbourne Park and it allowed her to cross the line with over two lengths in hand on the fast-starting Priceless Jet and Romeo Magico. In contrast, Beach Avenue, Knight Tornado and Darbys Delight sat off the pace.

By the corner, Susie Sapphire had increased her lead to three lengths and she proceeded to take the corners as though on rails. Romeo Magico was now a clear second after mastering Priceless Jet, who say third. Nothing else looked likely to land a blow.

Susie Sapphire was almost four lengths to the good as they approached halfway but then Romeo Magico started to makes things interesting. Graham Holland’s brilliant tracker started to bridge the gap in second, showing real fluency in his stride.

Closing the gap pretty quickly as they hit the third turn, he was just a length adrift when the wheels came off.

Easing every so slightly as he prepared to challenge Susie Sapphire, he was clipped from behind by the strong running Priceless Jet.

As Romeo Magico fell back through the field he came in contact with Priceless Jet. Beach Avenue was best placed to take advantage and he moved second but it all meant that the result was put to bed.

In a matter of a few strides, Susie Sapphire was left five lengths clear and she almost seemed to sense it. Galloping on with real gusto, the Derby champion hit the line four and a half lengths clear in 29.48. Beach Avenue ran on well to finish runner-up for the second year running, while Priceless Jet recovered from his rough passage around the final two bends to grab third, a further three lengths adrift.

Scarcely in the near one-hundred-year history of Shelbourne Park has any greyhound made such a start. To lead a field of such quality by three lengths at the turn was incredible.

In victory, Susie Sapphire became the first Derby champion this century to capture another classic. Given her brilliance, her age and her incredible style of racing, it would be unwise to rule out further classic glory in the coming months. 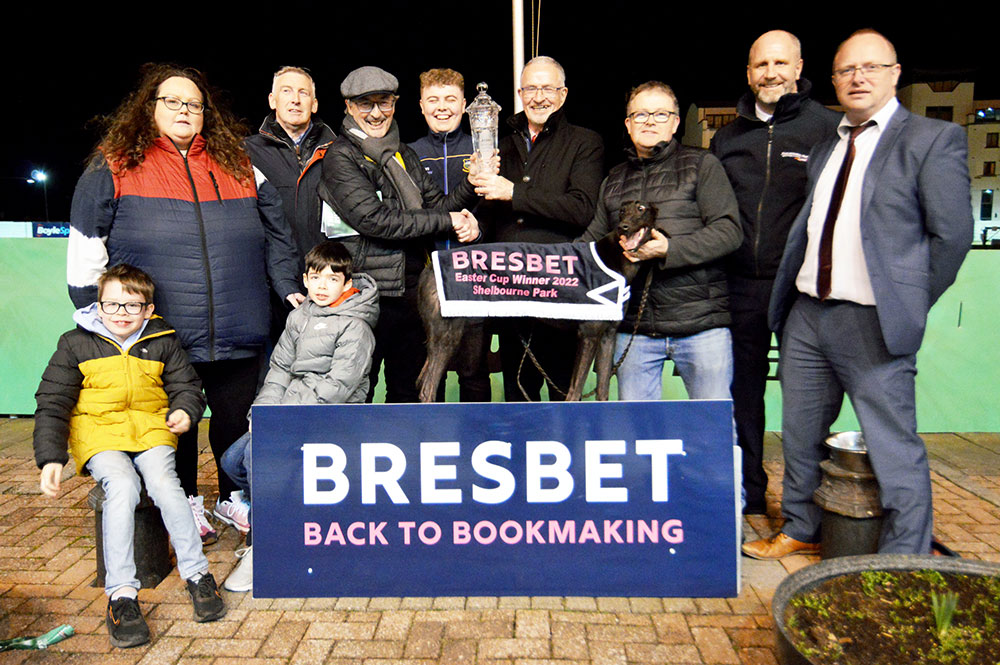 STUNNING RUN FROM LAD IN FINALE

Fittingly, racing ended on a real high note with Eimear and Michael Heeney’s Sentimental Lad racing to a brilliant victory over 575yds, stopping the clock in a stunning, fastest of the year 30.82.

This was little more than a solo for the son of Droopys Jet and Vigorous Hilary.

Going to the front early, Sentimental Lad pulled right away from his rivals to emerge a facile seven length winner over the staying on Cheero. On this type of form, the winner will surely be amongst the favourites for Shelbourne Open 600 glory.

A MASSIVE RUN FROM SPIRIT

Crokers Spirit produced an incredible run to run out a superb winner of the seventh race.

Trained by Matthew Harte for John Croker, the son of Scolari Me Daddy and Boleys Ace came in for support in the ring and it was inspired as he left a talented field in his dust.

Breaking fast from trap three, the September ’19 whelp quickly moved to the front and built a decisive lead down the back straight. Part Blake gave chase throughout but was never close enough to threaten. Crokers Spirit went on to cross the line six lengths to the good in a sizzling 28.08.

Striking the front in the early yards he kept on finding up front to repel his rivals. Monraud Thunder looked a serious threat to the third turn but Denis Curtin’s Jumeirah Bridge (Droopys Jet/ Jumeirah Lolls) closed the door at the third turn and proceeded to race on for a length and a half success in 28.47.

Fast Fit Paddy once again confirmed his standing as one of Ireland’s finest with a superb display of front running in the ninth race over 550yds.

The Declan McDonagh trained son of Ballymac Vic and Rosmult Martha was electric at boxes and was always the one to beat.

Catchmeflying got first run at Fast Fit Paddy but John Quinn and Paul Horig’s star had no intention of letting his advantage slip. It was all very straightforward for Fast Fit Paddy as he maintained a powerful gallop throughout to claim a three length victory over Catchmeflying in 29.54.

ELA BETTER THAN EVER

Ela Supremo was undoubtedly one of the best sprinters in Ireland in 2021 but all recent evidence would suggest he is even better in 2022.

The peter Cronin trained son of Ballymac best and Mashmad Eyebrows turned the fourth race over the two bends into a procession.

In short, Alex Antoniou and Peter Bennett’s brilliant sprinter flew out to make all, extending his lead throughout to beat Rising Castle by an ever widening seven lengths in a brilliant 18.41. The winning time is the joint third fastest ever recorded, summing up where Ela Supremo is right now.

Swords Maestro handled the step up to 600yds with little fuss in the tenth race on the card, taking advantage of an inside draw to go clear when the opportunity arose.

Pierno broke fastest and led the field into the turn but he slammed on the brakes and Swords Maestro didn’t hesitate.

Shooting up the fence, he asserted before the second turn and always looked in complete command. Amazing Champ gave chase for much of the way but Hello Hammond came with an incredible run to grab second in the closing yards. The line came in time for Swords Maestro, however, as he held on by a length in 32.74.

Razldazl Peaky may be four and a half years of age but the powerful son of Makeshift and Razldazl Pru is still capable of competing at the highest level as his victory in the penultimate race over 550yds highlighted.

Trained by Neilus O’Connell for the Kildare Kilcolgan Syndicate, Razldazl Peaky broke fastest to set a strong gallop. Rural Star displayed the superior back straight pace to take over on the third turn but Razldazl Peaky relishes the long run for home. Predictably, the October ’17 whelp rallied on the run in to get up late for a length and a half verdict over the staying on Muffin in 30.13.

Generous Angel was backed as thought defeat was out of the question in the open 750 but she checked up at the opening bend and found bad traffic, effectively ending her claims.

In contrast, Magical Poppy was foot-perfect for Donal and Pat Guilfoyle.

The classy daughter of Confident Rankin and Cabra Twister has made a good start to her six bend career and once assuming control on the bend, she always looked comfortable. Dark Ava gave chase throughout although she was headed on the line by the fast finishing Canyagoforit. There was no stopping Magical Poppy, however, as she ran right to the line to score by four lengths in a useful 41.64.

Jacktavern Bella looks destined to have a big future as a stayer and her strength was evident to all in the opening heat of the Skywalker canny @ Stud A1/ A2 Dual Distance.

The Graham Holland trained daughter of Droopys Sydney and Lemon Ariana was never too far off the pace and, once slipping onto the fence on the corner, she always had the early leader Geneva Holly in her sights.

Closing to the third turn, she waited for the gap to open before pouncing. Owned by the Pillar Syndicate, Jacktavern Bella stormed home to score by a length and a half from Droopys Unknown in 31.27. Geneva Holly qualified in third, a further length adrift.

PATIENT ON A CRUSADE

There was a serious display from Patient Crusader in the second heat as he posted a sizzling 30.86 in a facile success.

Tommy Caffrey and Kevin O’Brien’s son of Droopys Buick and Coolavanny Pearl broke smartly and quickly put his rivals to the sword. Clear to the bend, he increased his lead to halfway before eventually cruising home five and a half lengths clear of Ladyswell. Shinbone Jack was the third qualifier, eight lengths adrift.

The son of Confident Rankin and Boozed Bubble broke fastest and held his rails pitch to the turn to contain Black Matador.

Once entering the back straight in pole position he was never going to surrender his lead. Black Matador gave chase throughout but could never land a glove. At the line Lynchy Boy had four lengths in hand in a rapid 28.47.