BRILLIANCE FROM BEACH IN BALLYMAC COOPER DECIDER AT LIMERICK

BRILLIANCE FROM BEACH IN BALLYMAC COOPER DECIDER AT LIMERICK

The Ballymac Cooper @ Stud A3 525 has proved the perfect curtain raiser to 2022 at Limerick Greyhound Stadium and the €3,000 decider was polished off in tremendous fashion last night as Toolmaker Beach built on his semi final victory with another brilliant performance for owner William Hyslop.

Kindly sponsored by Liam Dowling, the final itself was expected to be a thrilling contest with Toolmaker Beach and Ballymac Jet going head-to-head in a repeat of last week’s semi final. On that occasion, Toolmaker Beach took control in the closing stages to land the spoils and although he left himself with much more on his plate last night, the hugely fast brindle produced another blistering finish to claim the handsome first prize on offer.

Heading to traps, both Ballymac Jet and Toolmaker Beach were installed the 6/4 joint favourites and, as expected, it was Liam Dowling’s Ballymac Jet who pinged the lids from trap one to set a scorching gallop on the approach to the opening corner. In contrast, Toolmaker Beach was very sluggish into stride from trap two and he was forced to settle for fourth spot entering the first turn and appeared to have plenty of work on his plate if he was to make it back-to-back wins. Already in possession of a five length advantage out in front, Ballymac Jet was setting a blistering gallop and it looked like game, set and match for the speedster as continued to extend his lead to seven lengths midway down the back straight. However, at this point Toolmaker Beach was displaying sensational speed in behind and he quickly cut a seven length deficit in half rounding the bottom two bends. Looking a potent threat as the winning line loomed large, Toolmaker Beach, trained by Robert Gleeson, finished like an express train and he stormed past the gallant Ballymac Jet to claim a three parts of a length victory. A phenomenal display from the son of Droopys Jet and Kilara Lizzie, the clock returned a rapid time of 28.54. 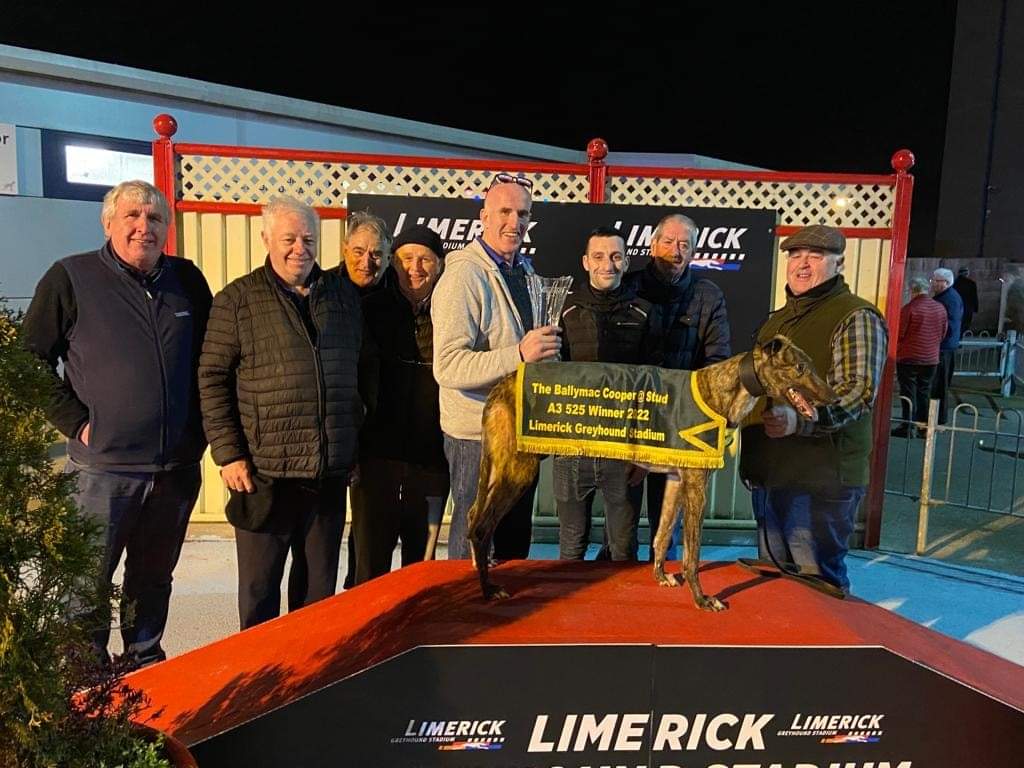 Elsewhere on the card, Wicky Curly produced a fine performance in an A6/A7 525 contest in race five. Owned by Kevin Kelly, the July 20’ son of Magical Bale and Ballintee Annie was sent off the 11/10 favourite and he soon took control with a smart break from trap four. Setting a fine gallop thereafter, Wicky Curly drew clear of his rivals to record a five length victory, in a time of 28.95.

Javier Jarne and Pat Buckley got on the scoresheet in race nine as Le Bonite justified his even money price tag to gallop to an impressive victory. Only a May 20’ whelp, the son of Droopys Sydney and Fair Act raced to a fine win on debut at Youghal and he was to make light work of his second outing last night at Limerick. Running from trap five, Le Bonite broke smartly and he showed good early dash to take control rounding the opener. Holding a four length advantage down the back, Buckley’s charge maintained a powerful gallop thereafter and he crossed the line with two lengths in hand over the fast-finishing Moanteen Cindy in second. The time was 28.82.

Whats Up Jack claimed race eleven as he made it two wins from his last three starts for the O-L-Syndicate. Running from trap three, the 3/1 chance was quickly into stride from trap three but he had to nestle in behind Sheriff early doors. However, taking up the mantle off the second turn, the son of Candlelight King and Balance Sheet set a strong gallop and despite being challenged by Hazelhill Hazard late on, Whats Up Jack held on by a neck. The time was 28.86.

The concluding race of the night saw Strandhill Rose also dip under 29-seconds for owner John O’Donnell. Running from trap one, the 3/1 chance disputed the early lead with Boomin Staker out wide and after a ding-dong buckle down the back straight, Strandhill Rose emerged a two length leader on the run for home. Staying on well in the closing stages, the daughter of Romeo Recruit and Killanin Flash had two and a half lengths to spare over Rockalong Sierra as the clock read a brisk 28.88.