This article was originally published in August 2020 on Balls.ie

Julie O'Connell is a 24 year old greyhound trainer from Limerick. Julie works full-time in Martinstown Stud for JP and Noreen McManus. She races mainly out of Limerick Greyhound Stadium. She is also a member of the Ardpatrick & Kilfinane Coursing Club.

Julie recently took over the training licence of her father, Pat. She has since begun carving her own career in training. She says that this was always the plan.

"Since I was five years of age I was out helping with the dogs," she said. "Then I did a Horsemanship course at Croom College of Further Education. It’s a level 5 and I was waiting for the level 6 to come on. I wanted to give dad a break.

"At the end of the summer he said “sure you might as well take it over.” He’s still at home and he still gives me a hand if I was ever stuck at work," she said. "He’s always there. Luckily enough the owners were okay with it as well." 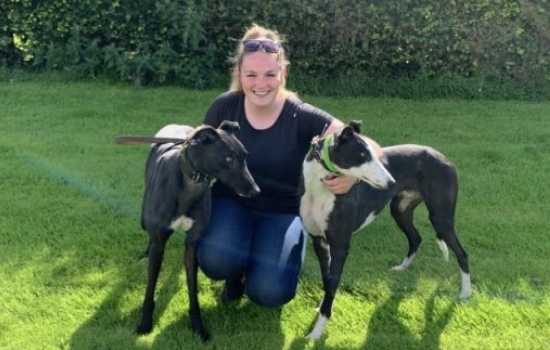 For Julie, greyhound training requires an early start and a long day.

Julie says that the thing she loves most about training is the dogs.

"The dogs are better fed than myself. They’re better minded, better looked after," she said. "And all my dogs get re-homed when they’re finished their racing careers."

This year, the COVID-19 Pandemic took a huge chunk out of Julie's training season.

"It was okay," she said. "We kept them walking, we’d take them out for a gallop. There was always light at the end of the tunnel. We just kept motivated and looked forward to starting back.

"It’s been tough enough [starting back] because we’re actually quite busy at work," she said. "Thankfully Dad is there to give me a hand with the early starts. But we end up killing each other every time we work together!"

Julie says people can doubt a female working in such a male-dominated industry such as greyhound racing.

"I think people can look at me and say ‘your father is doing all the work’. It’s easy to say from the outside looking in," she said. "There’s a lot of work going on behind the scenes with the dogs."