VINCENZO THE TOAST OF SHELBOURNE

VINCENZO THE TOAST OF SHELBOURNE

Vincenzo produced a near-perfect display to claim the headlines at Shelbourne Park on Saturday night as he came home a clear winner of the Shelbourne Champion 550.

However there was so much more to celebrate elsewhere on the card including two wonderful semi-finals of the staying classic, the Corn Cuchulainn and a track record for good measure in the finale over 575yds.

Vincenzo came into the Shelbourne Champion 550 decider on the back of two tremendous victories.

On both occasions he was forced to come from second spot to score but he saved his best for the decider and, after a flying start, was never under any pressure.

The Other Kobe was favourite from trap two but mistimed the start and fond himself short of room in the opening yards. In contrast, Vincenzo came through the bars to dictate from the outset.

Ballymac Ben and Droopys Nice One raced side by side into the turn in second spot but their chase was futile. Vincenzo hit the corner with two lengths in hand and he increased his advantage to three lengths by the second turn.

Even at this early stage in proceedings it was clear Cheryl Sutcliffe’s son of Droopys Sydney and Alien Nipper was not going to be stopped. The Pat Guilfoyle trained powerhouse continued to pile on the pressure to the third turn and he was four lengths clear by this point.

Up front, however, Vincenzo was on his way to a brilliant victory. The February ’20 whelp ran right to the line to score by five lengths in a rapid 29.27. Droopys Nice One was second with Ballymac Ben another two lengths back in third. Vincenzo will now be aimed at bigger targets with the Derby on the horizon. ON the evidence of this display, he is likely to be amongst the favourites to land the blue riband. 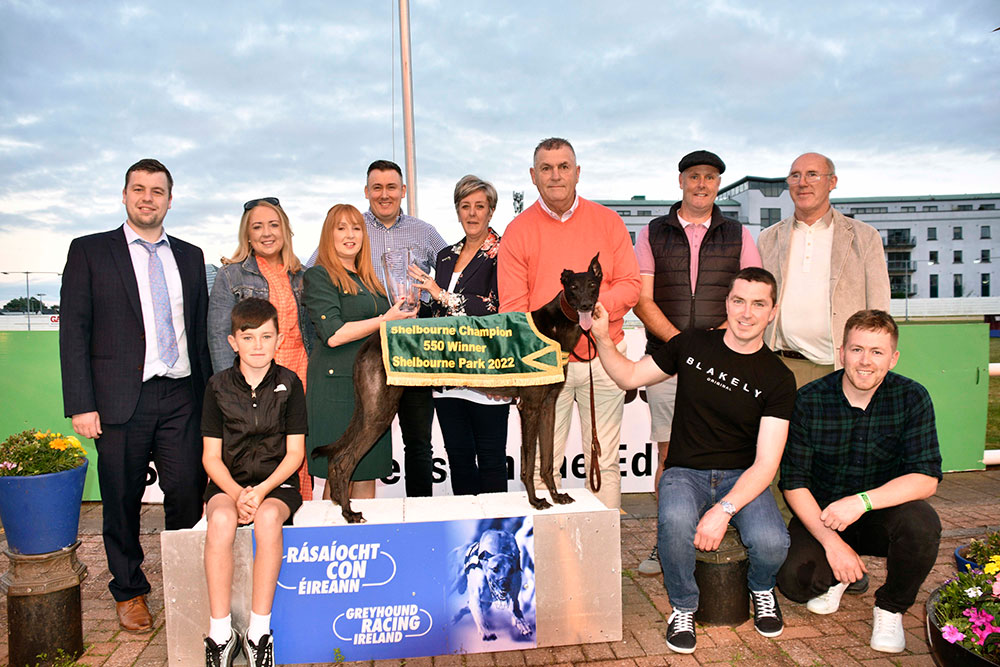 AVA TOO STRONG FOR BELVULT

There was no doubting Dark Ava had the engine to win the opening heat but the question was, where would she get the run required? In truth, for her backers, it was all pretty straightforward.

Ballymac Belvult broke fastest to lead the field into the turn but was immediately under pressure with Dark Ava cutting off Droopys Solider on the corner to go second from the wide running Ballinabola Bolt.

The order remained unchanged until the fifth turn, at which point Dark Ava began to make her move. Moving with real fluency, Mark Robinson’s daughter of Ballyanne Sim and Katies Decision breezed past the leader to quickly put the result beyond doubt.

Staying on stoutly, Dark Ava emerged a thoroughly deserving winner by four lengths over Ballymac Belvult in a fast 41.42. There was a further gap of two lengths to the wide running Ballinabola Bolt in third.

After a sensational run seven days earlier, Magical Poppy produced an almost identical run to run out a facile winner of the second heat for Donal Guilfoyle.

On what was a wonderful night for Pat Guilfoyle, Magical Poppy was very much the cherry on top as she dominated from the outset.

Making a flying start from trap five, she was clear of her rivals into the turn and proceeded to increase her lead to the third turn. Six lengths to the good at this point, she never gave her rivals a moment’s hope.

Crafty Kokoro recovered from a moderate start to move second as they entered the home straight. Toolmaker Beach attempted to challenge Crafty Kokoro at the fifth bend but she repelled his advances to remain second. Tinnock Solis stayed on well to grab the third qualifying spot but this was all about Magical Poppy.

The daughter of Confident Rankin and Cabra Twister was, for a second week running, in a league of her own. The August ’19 whelp cruised home five lengths to the good over Crafty Kokoro with Tinnock Solis another two and a half lengths adrift in third.

It was fitting that the night ended on a real high with Sentimental Lad smashing the six-year-old 575yd track record of Milldean Puma as he left a talented field standing.

The 4/5 favourite shot from traps to dominate from the start.

Innfield Dinger did all she could to stay in touch but it was impossible. Eimear and Michael Heeney’s charge was four lengths clear on the bend and he stretched it to double that by the third turn. Posting a sensational 18.31 to the third turn sectional, it was clear he was going to give the clock a fright.

Maintaining a relentless gallop throughout, the son of Droopys Jet and Vigorous Hilary cruised home nine lengths clear but the real story was his winning time. The September ’19 whelp stopped the clock in 30.59, a national record for 575yds and some six spots faster than the previous record. It was a truly spectacular display from an incredibly fast greyhound. On would assume, all roads now lead to the Derby. For the record, Innfield Dinger held off the advancing Ringthemoon by a short head to take second.

A PERFECT HALF DOZEN FOR HOLIDAY

Another Holiday continued the flawless start to his career with a typically brilliant trap to line success in the final of the Talking Dogs A0 525.

A red-hot favourite, he did everything right but needed to be at his best as Kilcogan Zeus was breathing down his neck throughout.

In fact, the latter closed into the third turn and looked the more likely winner for a couple of strides but Another Holiday kept finding up front and duly stayed on to record a sixth career success in his sixth career start.

Trained by Michael O’Donovan for young Jack Roche, Another Holiday flashed from traps and made every inch to see off the ever-persistent Kilcolgan Zeus by a length in a rapid 28.23. To highlight their superiority, there was a seven length gap to the chasing pack, headed by Classic Chick.

BUDIST COMPLETES A DOUBLE FOR GRAHAM

Graham Holland recorded a fine double in the second half of the card with Drumcrow Winx and recent Race of Champions winner Bockos Budsit.

The later completed the double in typically razor-sharp fashion in the penultimate race.

Bev Lochead’s son of Laughil Blake and Matts Monica flashed from the outside box to dictate into the turn although Ballymac Finn was in chase. The latter pressed hard to the third turn but Bockos Budsit kept finding to record a three parts of a length success in 29.56. Ballymac Finn just held the flying finish of Cricket Score to take second.

Drumcrow Winx sat well off the pace in the early yards in the ninth race but came home with a real flourish to lead in the closing yards.

Crawford Rudy’s daughter of Crash and Drumcrow Jessie was still well behind the pace-setting Saffron Mick into the third turn but she then began to close.

Cutting through the pack, Drumcrow Winx got to the front on the run in and stormed clear to score by two lengths from Badminton Shu in 28.66.

VELASCO SETS UP A SUPERB DOUBLE FOR OWEN

Velasco provided the perfect start to proceedings with a wonderful trap to line victory.

Des Grace’s son of Ballymac Bolger and Ballymac Arminta had shown real promise around Curraheen in the Denis Linehan Solicitors Unraced in recent weeks and made a successful Shelbourne debut in some style.

Breaking on terms, the Owen McKenna trained youngster flew into the corner to quickly assert. He drew further clear to halfway before emerging a very comfortable winner in 28.40, some six lengths clear of Riverside Best.

Owen McKenna didn’t have to wait long to complete a quick double as Callaway Masters was a thoroughly deserving winner of the second race, an A1 600.

Denis Murphy’s son of Droopys Sydney and Callaway Razl won the battle to the turn with Pyledriver and kept the same rival at bay throughout.

Pyledriver was never far away but steered a wide path, in contrast to the pace-setter. Despite the best efforts of his pursuer, Callaway masters went on to score by a comfortable half length in a quick 32.41.

Stefans Rock overcame a tough draw in the third race to come home in front.

Shea Campbell’s talented son of Ballymac Vic and Avongate Nova did well to turn second and he powered down the back straight to slip up the inside of the pace-setting tradesman at the third turn.

From there he put the result beyond doubt, moving on by a couple of lengths before crossing the line two lengths to the good in 28.42.

IT WAS LEAH’S TURN

After a massive jump up in grade after a superb success in an A5 in early June, it has taken Leahs Turn a little time to settle into top grade but David and Thomas Weadick’s looked right at home in the A0 fifth race on the card as he saw off Jirano Jetstream.

Leahs Turn flew from traps and led the field into the turn only to be joined and headed by Jirano Jetstream. Leah Turn wasn’t finished, however. The son of Superior Product and Tegans Turn rallied on the run in to get the better of Jirano Jetstream by a length in 28.50.