After four weeks of exhilarating action, the final of the 2022 Con & Annie Kirby Memorial took centre stage last night at Limerick Greyhound Stadium and it was Swords Rex who blitzed the field to land the richest Juvenile event in the world.

Opinions were split heading into what was the most open Kirby decider in memory but the general view was, given the brilliance of all six finalists, whoever trapped in front would go on to land the €80,000 first prize. This theory was to prove accurate and it was Swords Rex who made full use of a plumb draw on the fence to ensure the 2022 Con & Annie Kirby Memorial concluded in decisive fashion.

As the greyhounds went to traps for the feature event, Swords Rex was the 9/4 favourite but a very level break saw all six greyhounds in with a chance. However, within the blink an eye Swords Rex displayed incredible acceleration on the fence to pull clear of his rivals and it was Graham Holland’s charge who held all the aces approaching the opener as Kildare and the improving Ballinabola Ed gave chase. Maintaining his rails pitch rounding the opener, Swords Rex tracked expertly between bends and as he built up ahead of steam in front, trouble ensued in behind between Kildare and Ballinabola Ed, who both fell fowl to hefty bumps at this point.

Swords Rex had already landed the Rural Kennels Unraced at Clonmel earlier in the year and the Barbara Lowndes-owned black was in full throttle entering the back straight where he had opened a two length lead over Kildare in second. However, the latter checked at the second turn which allowed the wide running Magical Kuba to get into the mix and it was three in a line behind Swords Rex as Kildare, Magical Kuba and Droopys Edison all battled it out for second place. At this point, the prestigious Con & Annie Kirby was on its way to Riverside kennels as Swords Rex set a relentless gallop which had seen him stop the third bend sectional clock in a brilliant 16.04.

Magical Kuba had won the battle for second as he swooped the penultimate turn in his attempts to reel in the leader but the bird had well and truly flown up front as Swords Rex, a son of Droopys Sydney and Starry Display, produced a simply stunning performance to stay on strongly and land the spoils. Powering to a four and half length victory over Magical Kuba in second, the time was a sparkling 28.27. Kildare ran an excellent race given his traffic problems to finish a length and a half back in third, while Ballinabola Ed was luckless at the opening corner when well positioned to make a bold bid. Droopys Edison again showed big pace down the back straight but was crowded out at the third turn and it wasn’t to be for Scooby Prince, who never really got going for Jennifer O’Donnell after being outpaced in the opening exchanges. One sure thing is that all six finalists will no doubt figure heavily in the upcoming classics in the weeks and months to follow and the race itself was a magnificent conclusion to what was top-class Con & Annie Kirby renewal. 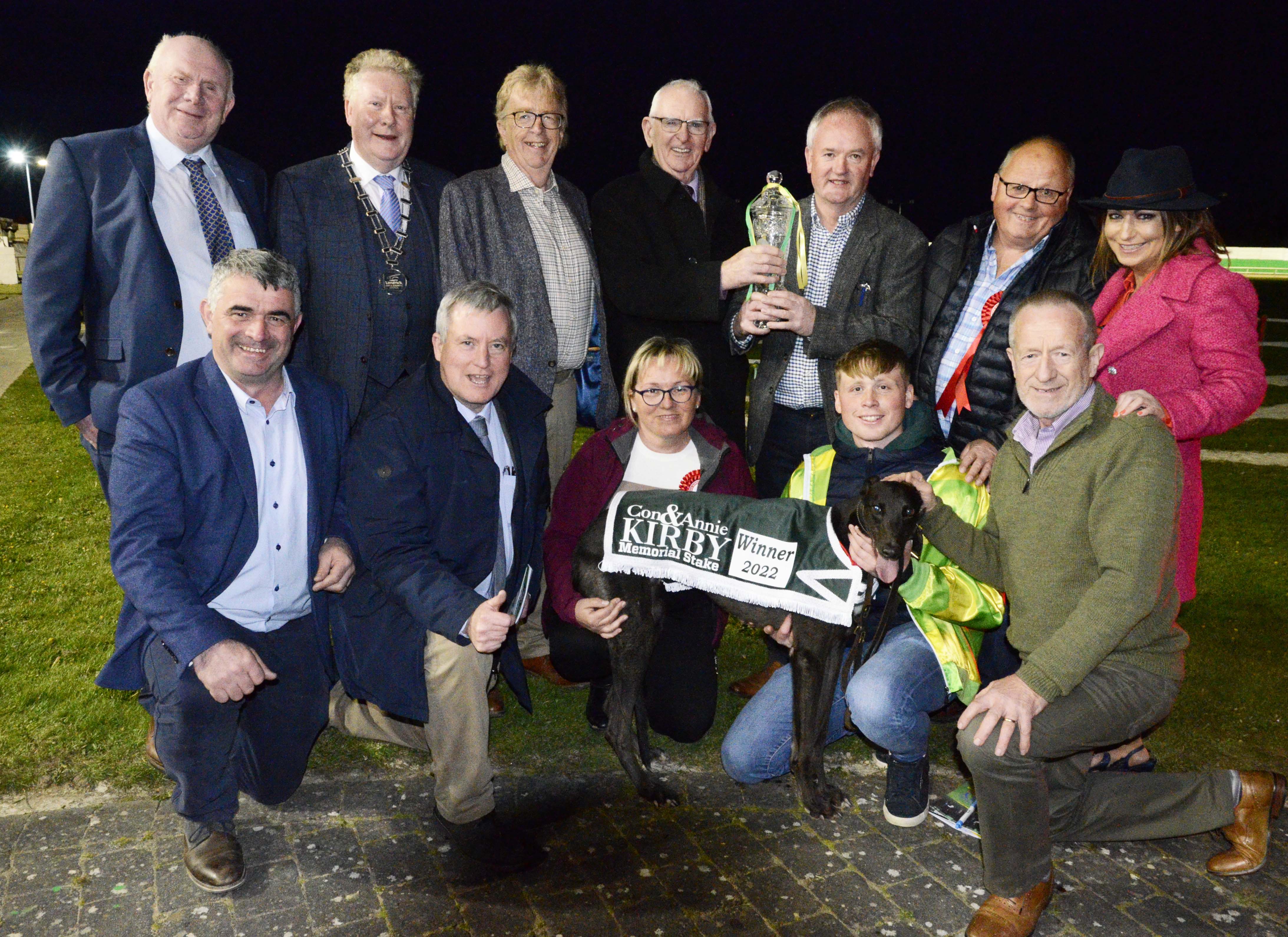 Singalong Sally (Tullymurry Act - Droopys Smasher) has gone from strength to strength since making the 2021 Kirby final at Limerick last year and she ran out a brilliant winner of the TRC & Star Sports English Derby Trial Stake.

Looking like a match race on paper between Singalong Sally and Part Blake on the inside, Gilbert Anderson’s bitch opened the traps herself as she rocketed to the front to lead into the opening corner. Holding a two length lead over Part Blake in second, the Pat Buckley-trained star set a storming gallop and she pulled clear in the closing stages to win comfortably. Three and a half lengths better off than Part Blake in second, the time was a fast 29.62.

There were a lot of eyes on Flashing Willow heading into the Minella Times Open 350 and he was incredible in landing what was a top-class sprint.

Owned by Kenny Glen and trained by Pat Buckley, Flashing Willow has been one of the talking dogs over the past couple of months but the son of Laughil Blake and Cabbage looked in a spot of trouble early on as Moonlight Macy took an absolute flier to lead from trap four. However, emerging from the pack was the explosive Flashing Willow in the stripes and he displayed awesome early pace to loom large within a matter of strides. Powering to the front at the opening bend, Flashing Willow was sensational in driving clear to record a three length victory. The time for the 1/2 shot was a brilliant 18.49.

The night got off to a flying start as Cheero (Droopys Jet - Cats Belle) won the Mister Donovan 600 at a canter. Racing from trap six for the Commons-Seven Syndicate, the Matthew Harte-trained 9/4 shot drew clear of his rivals down the back straight and he pressed home his advantage in the closing stages to win by seven and a half lengths from Toolmaker Beach in second. The time was a rapid 32.41.

Race two was the Synchronised A2 525 and this was landed by Finnure Storm for trainer Denis O’Malley. Owned by the Finnure-Storm-Syndicate, Finnure Storm broke smartly from his inside draw in two and he led Boomin Staker into the opening corner. Nip and tuck down the back, the son of Shaneboy Spencer and Brickfield Roxy maintained a good gallop and he pulled clear late in the closing stages to cross the line three and a half lengths clear of Loxley in second. The time for the 10/3 shot was 29.16.

The final of the €1.500 to the winner Limerick & Clare GOBA A3/A4 525 was race three on the card and there was a shock as 12/1 shot Speedie Syd landed the spoils. Owned by Padraig Fannin, Speedie Syd missed the kick from trap four but he showed sizzling pace down the far straight to nip up the inside of the well-supported Slippery Joe in trap one. From here, the May 20’ son of Droopys Sydney and Urban Time pressed home his advantage around the bottom two bends as he stayed on well to cross the line two lengths clear of Slippery Joe in second. The time was 29.11.

Race four was the Cill Dara A2 525 and it proved a procession victory for Oakfront Cadet. Quickly into stride from trap two, Oakfront Cadet switched wide off the second turn and this proved a decisive move as he outpaced the early leader Waikiki Slim. From here, Christopher and John Morrissey’s charge drew clear and really caught the eye as he ran out a convincing nine length winner. The time for the son of Belles Direction and Ferryforth Belle, who is only a June whelp, was a swift 28.59.

The sixth race was the Sean O’Connor Memorial 525 and this was landed in supreme fashion by the Gavin Johns-owned Carrauntoohil. Trained by Karol Ramsbottom, Carrauntoohil reached the quarter-finals of the Kirby Memorial and he bolted from trap three to head the field on the approach to the opener. In truth, there was never any danger of Carrauntoohil being overturned thereafter as the son of Bull Run Bolt and Ranchers Queen set a scorching gallop down the back before staying on well to score. Three lengths clear of Cnoc Abbie crossing the line, the time for Carrayntoohil was a slick 28.45.

In the Istabraq Open 750, Jacktavernbella was expected to take a fair bit of beating and she made it back-to-back wins over the marathon trip. Owned by the Pillar-syndicate and trained by Graham Holland, Jacktavernbella nestled in behind Bling Bling Paul for the majority of the contest but she stayed on well to take control rounding the final two bends. Getawaywithit was running a massive race out wide for Brendan Matthews and she is certainly one for the notebook but it was Jacktavernbella who crossed the line two lengths in hand. The time was a brisk 41.88.

Drombeg Ten has been in flying form around Galway and he carried that form to Limerick last night as Evan McAuliffe’s progressive fawn landed the Spot The Difference AO 525. A striking fawn, the son of Grangeview Ten and Blastoff Khalesi flew from trap three to lead early doors. Setting a powerful gallop down the back, Drombeg Ten did come under late pressure from Vigorous Buck in four but held firm to cross the line with a length in hand. The time was 28.70.

Galloping Image landed race eleven which was the Staker Wallace A1 Bitch 525 as she recorded a second career win for Una Creed. Running from trap three, Galloping Image came away racing and she was to cross the line two lengths better off than Tullovin Vita in second. The time for the daughter of Droopys Sydney and Mags Image was 28.96.

The concluding race on the card was the Don’t Push It 525 and this saw Farranrory Megan bounce back to winning ways for Keith Freer and Sharon Hunt. Bidding to bring her winning tally to ten wins, Farronrory Megan trapped smartly from five and once doing so, the result was never in any doubt. A very talented sort, the daughter of Jaytee Jet and Farranrory Fay set a strong gallop and she was four lengths clear of Risky Reward crossing the line. The time for the 5/2 shot was 28.80.