The final of the Shelbourne Open 600 served as Fast Fit Paddy’s coronation as the brilliantly fast and strong son of Ballymac Vic and Rosmult Martha posted one of the great runs in the €15,000 to the winner classic on Saturday night.

A model of consistency through his first full season in 2021, it was always evident he was fast enough to challenge at the highest level but he returned in 2022 a different dog with a bit of extra swagger.

That was certainly on show at Shelbourne Park on Saturday as he saw off a top-class field with ruthless efficiency and real brilliance. Despite the emphasis on stamina, the run to the corner was always going to be of real importance.

As they hit the line on the run to the bend, only inches separated the pair with Fast Fit Paddy just in front.

Allforthebest was on their shoulder in third, although he was headed on the turn by the advancing Kilkenny Santy. Sadly, for the connections of Sentimental Lad and Young Bud, both were slightly tardy at boxes and were never in a position to challenge.

Instead, Fast Fit Paddy, who had the inside line, slipped around in front. Hello Hammond turned second but found himself three lengths behind the pace-setter as they straightened into the back. Kilkenny Santy was on his inner with Allforthebest, after losing ground on the turn, fourth.

It was already clear that Fast Fit Paddy was going to take some stopping.

The evidence of the previous two rounds suggested that Fast Fit Paddy stays every inch of the trip and nothing that happened in the subsequent 380yds would change that view.

By halfway, Fast Fit Paddy had increased his advantage to almost four lengths and he continued to pile on the pressure. Hello Hammond was now being pestered by Kilkenny Santy while Allforthebest was on their heels.

But this was now effectively a one-dog affair. Fast Fit Paddy was striding out like a greyhound at the very peak of his powers on his way to the biggest success of his career to date. Owners John Quinn and Paul Horig could only have dreamed of the scenario where Fast Fit Paddy only needed to stay on his feet to come home in front.

He did more than that. Declan McDonagh had his star primed for this run and he really delivered. Maintaining a relentless gallop to the line, he never gave his many followers a moment’s worry. Predictably, Hello Hammond did finish with a flourish but it was futile. Fast Fit Paddy remained clear to cross the line with two and a half lengths to spare of Hello Hammond with Kilkenny Santy running a career best race in third, a further length and a half adrift. Allforthebest was another length away in fourth.

To highlight the quality of the performances, of the six finalists, Young Bud posted 32.66 in last. But the spotlight was firmly on Fast Fit Paddy.

Crossing the line in 31.96, he became just the third greyhound in history to dip under 32 seconds for the testing 600yd trip.

It was a fitting way to capture his first classic and Declan McDonagh, John Quinn and Paul Horig can now start dreaming of further glory. A trip to Towcester has been mooted but that’s for another day. For the moment, one suspects the trio will enjoy the coming days before coming up with a firm plan. 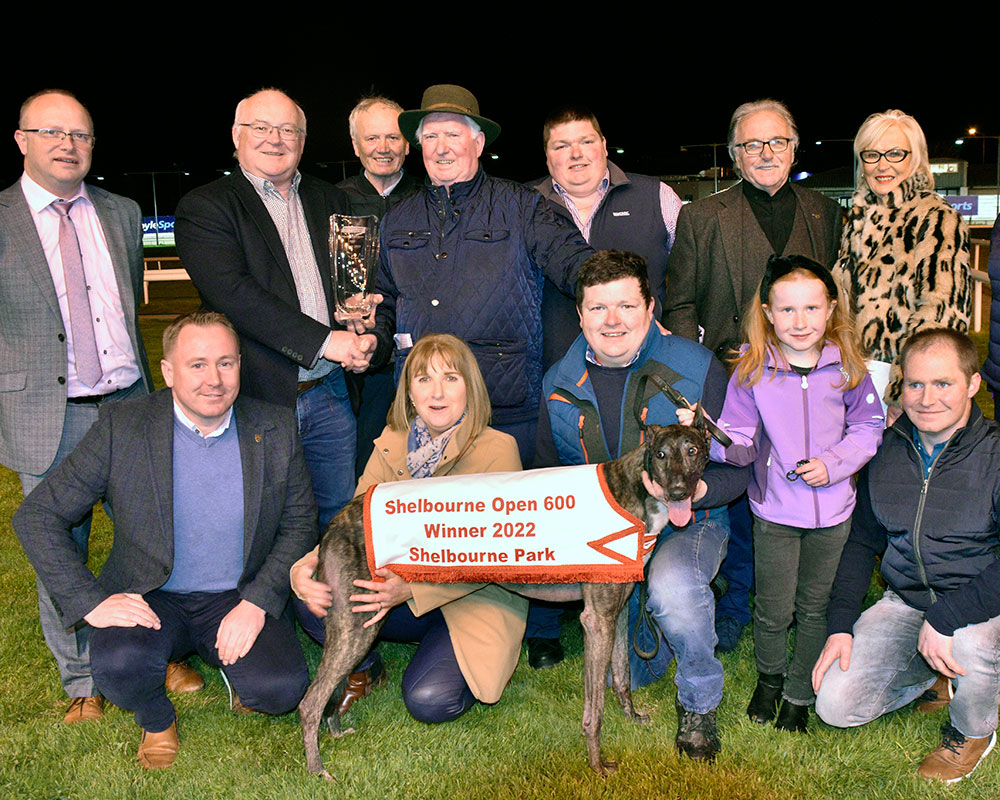 MARIE IS NO BRIDESMAID

Dolores Ruth recorded a wonderful double on the night with the highlight being the display of Maries Wedding as she ran out a brilliant winner of the opening heat of the Suncroft Festival Puppy Oaks.

An impeccably bred daughter of Droopys Sydney and Ballymac Petsy, Maries Wedding displayed tremendous early zip to dominate from the outset. Coolavanny Nanni gave chase throughout but there was no stopping Maries Wedding.

She looked a very bright prospect as she stormed home to record a five lengths success over Coolavanny Nanni in a rapid 28.21. Crafty Jayko recovered from a slow start to take third, some two lengths further back.

Brynoffa Arminta is certainly bred to be special as a daughter of Ballymac Bolger and Ballymac Arminta and she made the most pleasing debut in Heat 2 of the Puppy Oaks when shooting from trap five to make every inch.

There was no stopping Eamon Mackey and Marc Thompson’s September ’20 whelp as she maintained a strong gallop throughout. Fire height Mal was left second down the back straight when Kildallon Tilly and Burgess Josie clashed at the second turn but she could never bridge the gap.

Brynoffa Arminta went on to stop the clock in 28.74, some two lengths clear of the staying on Fire Height Mal. There was a further five length gap to Kildallon Tilly in third.

There was so much to like about the display of Ballymac Whispa in Heat 3 as she came with a massive run into the third turn to join and head the long-time leader Droopys Request.

The latter seemed a likely scorer when motoring into a clear advantage by the second turn but Ballymac Whispa had other ideas.

Liam Dowling’s daughter of Ballymac Anton and Ballymac Minton flew down the back straight to bridge the gap with some ease and she shot straight past the leader around the last two bends before pulling away for an impressive two and a half length success in 28.88. Droopys Request was second with Florentis staying on well for third a further length adrift.

A SNAZZY DOUBLE FOR LIAM

Liam Dowling completed a fine double some fifteen minutes later with Ballymac Snazzy showing fine track craft and determination to recover from a tardy start. Carlow Bee broke fast from the inside box and led up the inside of the track.

That left Ballymac Snazzy with the room to slip through in second.

Once doing so, the daughter of Ballymac Bolger and Ballymac belle always had the leader in her sights. Showing fine back straight pace, Ballymac Snazzy got up the inside of Carlow bee on the third turn and proceeded to ease clear. Despite tying up a little in the closing yards, Ballymac Snazzy emerged a good three length scorer over the fast finishing Droopys Dot in 28.88. Carlow Bee held on for third, just three parts of a length adrift in third.

Part Blake was understandably a red-hot favourite for the ninth race on the card and the Graham Holland trained star duly obliged in thoroughly professional manner.

The son of Laughil Blake and Galloping Maeve flew from the inside box and quickly built a clear advantage.

Despite coming back to his rivals on the run in, Una Creed and Mary O’Connor’s tracker went on to record a thoroughly professional four length victory in 29.55. Ballymac Belvult ran on strongly to take second spot.

Coolavanny Calvn was one of the undoubted stars of the undercard when returning after a lengthy layoff to post a superb 28.24 in the third race.

Trained by Michael O’Donovan for Bernadette and Basil Holian, the son of Droopys Sydney and Coolavanny Royce looked a real prospect last year and it’s clear he has lost none of his sparkle.

Breaking fastest from trap two, he comfortably led his rivals into the turn. Mustang Jet did show fine pace to challenge to the third turn but Coolavanny Calvn kicked again to eventually come home with two lengths to spare.

2021 Juvenile Derby champion Droopy Gloss had hinted in her latest outing that she was ready to return to winning ways, running on strongly behind Crokers Spirit last weekend.

Those that spotted the run were richly rewarded as she emerged a tremendous winner of the tenth race at 7-1, seeing of Coolavanny Duke.

The big two in the market were Droopys Good and Crokers Spirit but both greyhounds missed the start. instead Coolavanny Duke and Droopys Gloss came away fastest. The pair battled it out into the bend with Coolavanny Duke holding a narrow advantage.

The Murt Leahy trained Droopys Gloss ran a brilliant second turn, however, and shot past her rival to move into a decisive advantage. Coolaanny Duke didn’t go down easily, closing again to the third turn but Droopys Gloss is very strong and she duly kicked again off the final bend. John Coleman’s brilliant daughter of Coolavanny Jap and Droopys Talia eased on to beat Coolavanny Duke by a length and a half in 28.49.

Droopys Nextone produced a statement run in the penultimate race for Johnny Linehan and Ray Hamilton.

The daughter of Ballymac Eske and Droopys Cuckoo boasted some tremendous form but this was a special run as she saw off a talented field in real style.

Lisnakill Vernon went up fastest to dictate on the inside of the track but Droopys Nextone soon hit stride to turn second. Showing an impressive turn of pace into the third turn, she asserted before pulling right away to see off Bockos Vieira by five lengths in a fast 29.59. It was a performance of real note and it’s clear she has the ability to be a big player in all the major competitions through the remainder of the year.

Sean Bourke and Paul Horig’s Mustang Joey (Droopys Jet/ Mustang Kay Cee) displayed a fine turn of early speed to turn the A2 opener into a bit of a procession.

The July ’20 whelp quickly moved clear of his rivals and coasted home a comfortable three and a half length victory in 28.66, in turn initiating a wonderful double for Dolores Ruth.

MAGIC MONARCH ADDS TO HIS TALLY

The remarkably consistent Razldazl Monarch emerged a good winner of the finale, his nineteenth career victory.

Trained by Neilus O’Connell for the Kildare Kilcolgan Syndicate, the evergreen son of Makeshift and Razldazl Pru quickly asserted.

Contract Law came away racing from one but Razldazl Monarch headed him into the bend and he proceeded to move into a sizeable advantage. Droopys Aplus did finish strongly to close on the run in but Razldazl Monarch wasn’t to be denied and he went on to score by three parts of a length in 30.15.

KAMEKO IN A TIGHT FINISH

There was a desperately tight finish to the second race as Larry O’Rourke’s Kameko repelled the late challenge of Postman Cat.

The former forced his way to the front on the bend and seemed certain to emerge a comfortable winner.

The Graham Holland trained son of Good News and Mysterious Ways could never put the race to bed, however, and Postman Cat came with a strong challenge off the final bend. Postman Cat may have actually struck the front but the wide running Kameko rallied on the run in to take the verdict by a head in 29.04.