Liam Dowling had a night to remember at HQ on Saturday night as he not only captured the Suncroft Festival Puppy Oaks with the talented Ballymac Snazzy but also recorded a tremendous hat trick care of Ballymac Ben and Ballymac Whispa.

The final of the Suncroft Festival Puppy Oaks looked an open affair but it was clear from the opening exchanges that only Ballymac Snazzy or Maries Wedding would be landing the €5,000 prize. There was something of staggered start with Droopys Request stepping out of boxes and missing a stride, while Crafty Jayko also mistimed her exit.

AS the straightened up into the back straight it was clear the winner could only come from the front pair. Ballymac Snazzy held an advantage of a length and a half over Maries Wedding but it was clear this was going right down to the wire.

Maries Wedding started to advance into the third turn but chose to challenge on the inside. Ballymac Snazzy wasn’t having it and she closed the door, forcing Maries Wedding to check slightly. Still, she came at the leader, however.

More than two lengths down as they came of the final bend, Maries Wedding came with one last charge but Ballymac Snazzy really dug in and the daughter of Ballymac Bolger and Ballymac Belle stayed on to hold her rival by a head in 28.66. There was a further five length gap to Kildallon Tilly in third. 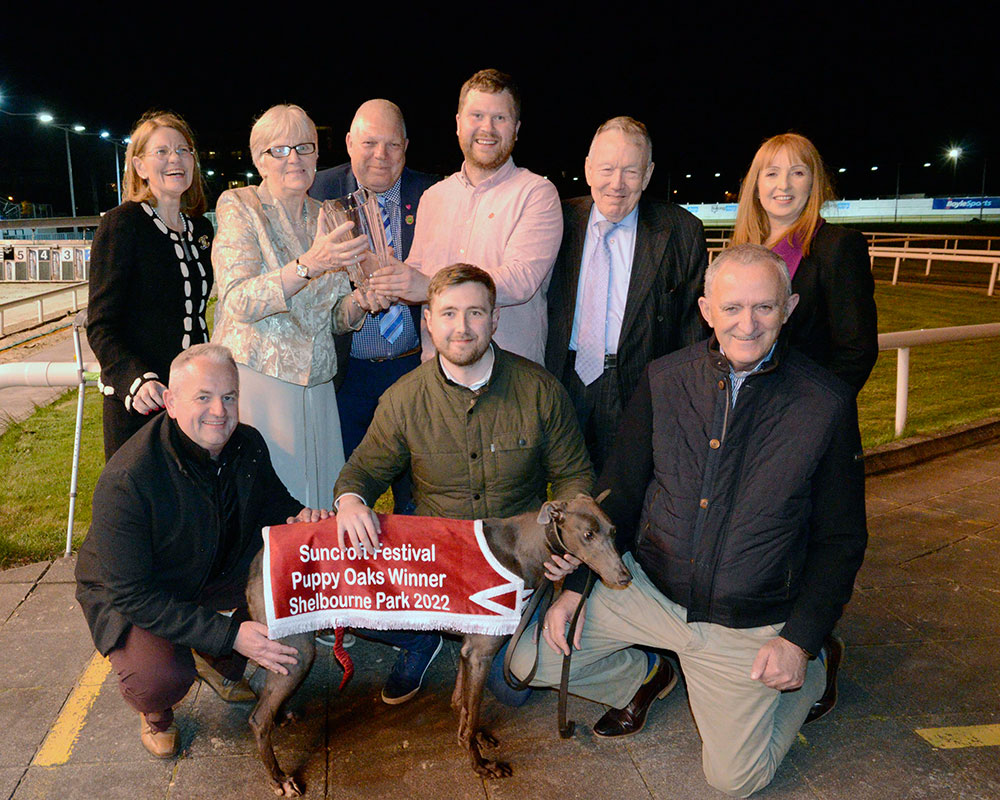 The €1,500 final of the RCÉ A1 525 looked a tough puzzle to solve but those that chose Ballymac Ben were richly rewarded as he came with an incredible run in the second half of the contest to win by a wide margin.

Shall We broke fastest and slipped around in front but Ballymac Ben displayed fine track craft on the bend to go fourth. As they hit halfway, it was clear that Ballymac Ben was the biggest threat to the leader as he started to devour the ground.

Motoring past both Delerium Tremens and Razldazl Monarch on the third turn, Liam Dowling’s powerful son of Ballymac Anton and Elite Hawk soon joined and headed the pace-setter. Maintaining a relentless gallop to the line, the June ’20 whelp ran right away from his rivals to cross the line five lengths clear in 28.53. Shall We was second.

After the superb displays of both Ballymac Snazzy and Ballymac Ben, Liam Dowling later completed a pretty incredible treble with Ballymac Whispa claiming some notable scalps in the penultimate race including those of the Derby, Oaks and Easter Cup champ Susie Sapphire, Crokers Spirit and Romeo Magico.

The race to the corner was a tight one with Kilgraney Sydney, Susie Sapphire and Crokers Spirit racing side by side into the turn. There was plenty of bumping between the trio with Susie Sapphire somehow finding a way to turn in front.

She wasn’t carrying much momentum, however. That’s something that can’t be said for Ballymac Whispa. After sitting last into the turn, she was first left fourth before further traffic in front saw her move a close second.

Susie Sapphire attempted to go clear but Ballymac Whispa is not short of pace and she charged down the far side to take over into the third turn. Crokers Spirit also flew into the third turn and he got tangled up with Susie Sapphire. As a result, Ballymac Whispa was clear turning for home and she stayed on to record a superb eight length success over Crokers Spirit in 28.50. Susie Sapphire finished at the tail of the field but, thankfully, seemed fine despite her rough passage.

BLU TAKES OFF IN RCETS

The semi finals of the valuable RCETS Open 525 were the feature of the undercard and Clona Blu took off to post a fastest of the round 28.26 in the second heat.

Representing Kevin Losty and the Give Him A Chance Syndicate, the hugely fast son of Droopys Sydney and Skywalker Pearl was to the fore in the early yards and asserted on the bend.

Mags Memory gave chase throughout and never let the leader get too far clear but Clona Blu has a big engine and he ran right to the line to emerge an impressive two length scorer. There was a further eight length gap to Zoom in the third qualifying spot.

Trained by Karol Ramsbottom for Michelle Connolly, the son of Laughil Blake and So Said Sarah was razor sharp at boxes and comfortably led his rivals into the bend.

Glenquain Pat and Droopys Good gave chase but neither would be renowned for their stamina, leaving Vanderbilt in a very strong position. Glenquain Pat tried all he could to bridge the gap but Vanderbilt was always in control as he emerged a three length scorer in 28.61. There was a half-length gap to Callaway Masters in third.

A PLEASURABLE RUN FROM PATSY

Racing ended with a tremendous display of front running from the Brendan Maunsell trained Patsys Pleasure over 600yds.

Owned by the NKWL Syndicate, the daughter of Pat C Sabbath and Fire Height Brid flew from trap three and was soon in complete control.

Iso Fantastic attempted to reel in the leader but Patsys Pleasure is very strong and she kicked again of the final turn to emerge a comfortable three and a half length scorer in 32.53. Veteran performer Oran Don stayed on well to take second spot.

There was a tight finish to the sixth race with Ringthemoon displaying real determination to get up in the closing strides to deny long-time leader Meenagh Melody.

Here Derby third Jackslittlething was a hot favourite but he looked pretty flat and failed to land a telling blow.

In contrast, Meenagh Melody was electric in the early yards, going clear around the opening two bends. Importantly, Ringthemoon got loose down the back straight in second and began to bridge the gap. Trained by Liam O’Rourke for Karl Cooney and Michael Dowd, the son of Droopys Sydney and Sparta Emmy finally collared the leader on the line to score by a short head in 29.95.

IT’S ALL OVER AS WORLD LEFT CLEAR

Allovertheworld (Pat C Sabbath/ Killeen Princess) made the most of a rails pitch to emerge a comfortable winner of a messy tenth race.

The Marie Gilbert trained tracker broke fastest and led early but he was one of a line of dogs disputing the lead on the turn.

Something had to give. As a number of his rivals encountered traffic, Allovertheworld slipped around in front to build a clear advantage by halfway. Bockos Budsit gave chase in second but was never a realistic threat. At the finish, Des Gilbert’s Allovertheworld had seven lengths in hand in 28.71.

Newinn Nifty hit the front early to win the fourth race for the Derby winner dup of Graham Holland and Simon Taylor.

The daughter of Droopys Roddick and Newinn Expert got a clear run out front which is more than can be said for the fast finishing Hoodoo Brown.

The latter came through for second in the closing yards but Newinn Nifty held on to record a half length victory over his pursuer in 28.69.

WARRIOR IMPRESSES FROM THE FRONT

Born Warrior was a very taking winner of the second race, showing wonderful early speed to lead into the turn before easing on to record a comfortable success.

Jointly owned by Jennifer O’Donnell and John Mitchell, the well bred son of Ballymac Best and Mountaylor Queen posted a fast 15.98 to the third turn and this allowed him lead his nearest rival Storys Sandy by three and a half lengths.

Maintaining a good gallop all the way to the finish, the brindle April ’20 whelp went on to hit the line some five lengths clear of Storys Andy in a quick 28.53.

Tamara Butler made an ideal start to the evening, sending out Droopys Aplus to open her account at the fifth time of asking the A2 opener.

The daughter of Tullymurry Act and Droopys Justine turned relatively close behind the fast starting Giddyupgonzo before charging into the third turn to take control.

Once doing so, the October ’19 whelp eased right away to win by an ever-increasing five lengths in 28.58. Front Pasha ran on to grab second on the line.

Cu Mochua normally wins his races from the front but he had to dig deep to justify favouritism in the A1 third race.

Trained by Karol Ramsbottom for the Thirsty Seven Syndicate, the son of Droopys Sydney and Bangla Road was only third into the back behind the fast starting Coss Ace and Highview Magnet.

Showing Fine pace into the third turn, Cu Mochua moved into second spot and, staying tight to the fence, took over between the last two bends. From there he went on to record a four length victory over Coss Ace in 28.74.