LOCKDOWN THE STAR AT SHELBOURNE

LOCKDOWN THE STAR AT SHELBOURNE

The aptly named Lockdown took the headlines at Shelbourne Park on Friday night as he raced to a fine victory in the valuable Painstown Kennels A1/A2 550.

Owned by the father and son team of Tommy and Tim O’Donovan, the son of Laughil Blake and Miss Mini Marvel was right in the firing line into thee turn and he drove the bend to go to the front.

Initially, Fast Fit Limit offered the most resistance but he lost his chance at the third turn and the advancing Clearaway Kayla emerged as the main danger. The latter did close on Lockdown up the straight but there was no catching the pace-setter. Staying on to the finish, Lockdown ran out a length winner over Clearaway Kayla in 30.16. 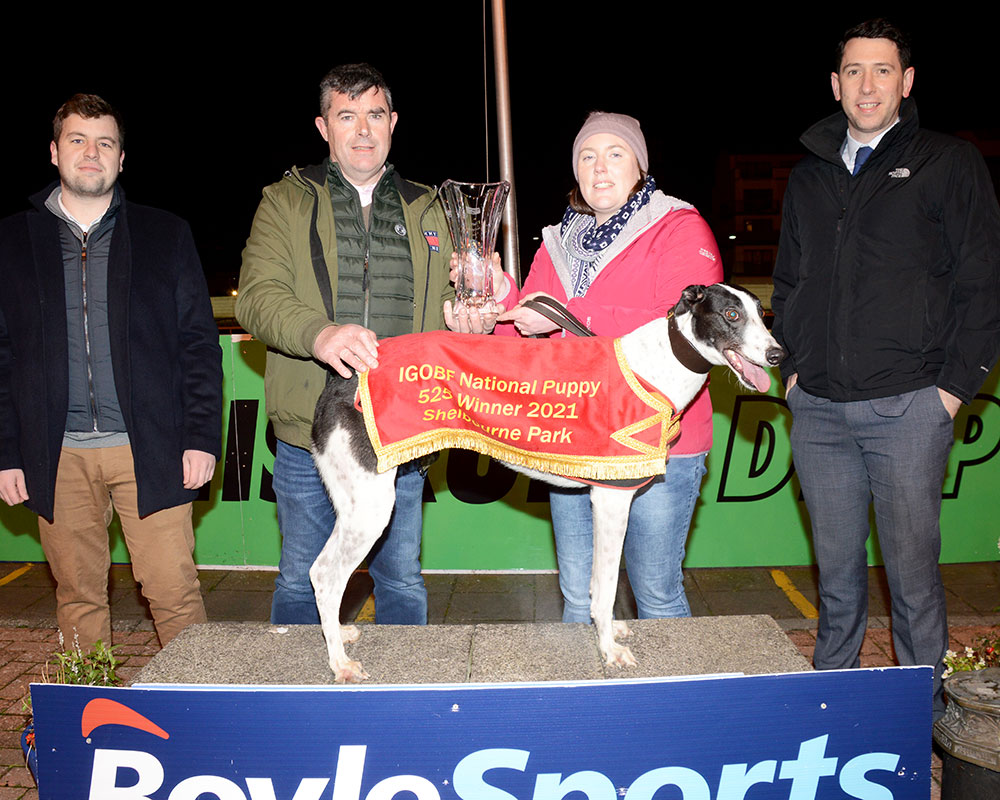 Moira Costigan’s Mydras Kim followed up a fine opening round effort to set the pace in the second round of the Bull Run Bolt @ Stud A3 575.

From an ideal draw on the fence in the final heat, the daughter of Ballymac Eske and Cat Girl broke smartly and soon found herself in the clear.

Maintaining a powerful gallop throughout, Mydras Girl went on to see off Elsie The Cooper by four lengths in 31.45 with Hather Daisy running on well to take third, a further two lengths adrift.

After going fastest a week earlier, Cricket Bell continued his unbeaten run through the stake in Heat 3 when leading throughout for Donald O’Neill.

The son of Iso Octane and Coolemount Bally moved to the front as they approached the turn and proceeded to make all for a five and a half length victory over Ballymac Deb in 31.50. Realism was the third qualifier a further length back.

Deadly Endeavour, owned by the Who’s Doin’ The Talkin’ Syndicate, made it two wins on the bounce in Heat 2 but he had to work really hard to get the better of the persistent challenge of Fox Brae.

The pair were scarcely separated by more than a half length throughout the contest but Deadly Endeavour (Good News/ Tomahurra Cloud) made a decisive move as they turned for home to come home with three parts of a length in hand in 31.74.

CASE ON THE CASE

The opening heat of the round saw Mark Lowther’s Boynepark Case come from well off the pace to land the spoils.

Ballinabola Moll set the pace for much of the way but the finishing speed of Boynepark Case was to make the difference. Moving into top gear as they hit the third turn, the Pat Norris trained Boynepark Case flew up the straight to emerge a two and a half length scorer in 31.77. Miss Maryann was a length away in third.

MARTIN DOUBLES UP IN STYLE

The two fastest runs on the undercard provided Martin Lanney with a superb double.

Bit View Vinny went quickest, making all after a flying start from trap four to emerge a comfortable scorer. Frank Harkin’s son of Droopys Cain and Russanda Vicky made every inch to beat Ravenswood Mitch by a length and a half in 28.66.

The finale went to Bellmore Warrior (Skywalker Puma/ Mercury Kate) as he completed the Lanney double in style. Prominent to the turn, he drove to the front to enter the back straight with a clear advantage. Magical Cormie did make up ground to chase him home in second but the TG McCourt Racing Syndicate owned Bellmore Warrior went on to score by a length and a half in 28.76.